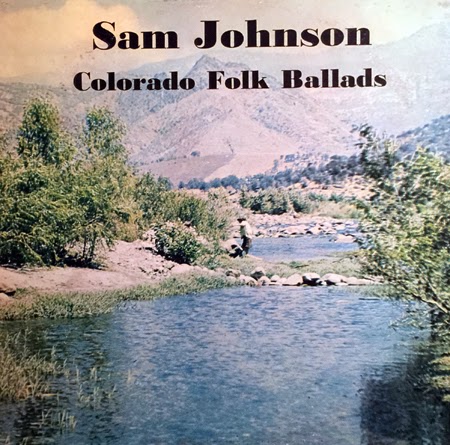 Sam Johnson
Colorado Folk Ballads
(1965)
Side One:
The Place That They Call Home
A Long and Sad Farewell
Don't Blame Me
If You Like That Kind of Thing
All of September
This Weary Road

Side Two:
Where Man Once Was
Quiet Valley
Satan's Got a Way
Long Road Home
Ballad of Wilborn's Wall
There's Still a Place for Faithfulness
Together, Hand in Hand

I'm calling it.  My best obscure Colorado discovery of 2015 (actually, a fellow collector found this and sent it to me, but still).

I first noticed the cover, the same picture used on the Emanon Majority LP I featured back in 2009. Your standard issue private vanity cover (collectors of these call this particular cover art the "burying a body," "taking a wiz," or the "Big Foot" cover). 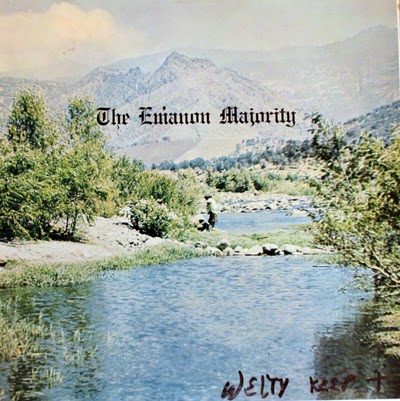 Can't find a thing about Sam Johnson.  The only other name on this record is that of Scotty Glasgow, who produced this album in his basement recording studio on Cascade Avenue, in Colorado Springs. Scotty, who was born in 1916, worked at the Gazette-Telegraph, hosted the Scotland Pride show on KRDO-TV, and ran the Scotty Glasgow Advertising Agency, when he wasn't recording local singers.

Thankfully the LP had a typewritten insert from Sam:

"In response to recent requests for it, I have decided to release this album of original folk songs, featuring my favorites, the folk ballads."


"Concerning the songs of protest.  The purpose of 'Satan's Got a Way' is to explain the basic cause of the need to protest, not only in songs, but in everyday conversation. Understanding the cause of society's problems is certainly one big step toward realizing a solution.  If our great leaders can dig out from under their cover of intellectualism, open their hearts to Truth, and fight, not in the war between the nations, but in the war within their own hearts, more and more people will someday see a victory, at least in individual lives.  In the great physical war, as nations rise against nations, victory and destruction will be synonymous, but in the spiritual war, victory if attained, will be once and for all, and will mean real peace."
Posted by Lisa Wheeler at 6:03 PM No comments: 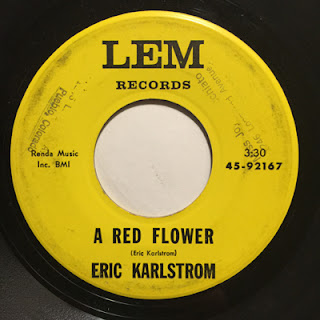 Not sure where I found this endearing folk disc. It's been in my stash for a long time, so I assumed I did some research on it awhile back, or made a note that it had SoCo regional roots (it was stamped with a Pueblo address on the label), but I since lost those notes.

Back to square one.

So thanks again to the Internet Gods I tracked down Eric, who lives in Crestone, near the Great Sand Dunes National Park, about an hour north of Alamosa.  Come to find out, the record is actually out of Arizona, but since he is still an active performer in the SoCo region, I thought I would give his record a shout-out.

"I wrote those two songs my senior year of high school, this would have been 1967. 'A Red Flower' is something I wrote after reading the book, The Little Prince, in high school." 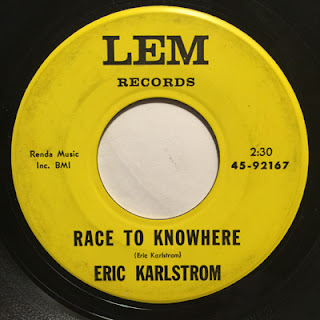 Listen to a sample of "Race to Knowhwere"


'The Race to Knowhere' kind of grew out of my readings on existentialism in high school - also perhaps the general mood of the country back then - this would have been 1967 - and the fact that both my parents were pretty high-powered academics. At the time, I kind of dreaded jumping into the rat race, but did anyway, of course.  I got a M.A. and Ph.D., and became a university geography professor, but kept doing music throughout, of course.

LEM (the name of the label) stands for Lunar Excursion Module, the vehicle that the astronauts were going to use on the moon landing.  My father was one of the geologists who trained the astronauts for the moon expeditions back in the late 1960s and early 1970s.  He funded the 300 copies that were pressed.  Calling it LEM Records was his idea.

One of my high school friends' father suggested that I record the song at the local KAFF radio, in Flagstaff.  I played harmony guitar and sang, and another high school friend, Richard Cavanaugh played lead guitar, and Dennis Olesniwich played tambourine.  Before we pressed the tape into vinyl the guy at the record company suggested it needed a bass. So my father paid a local bass player $20 to dub the bass part.

A high school buddy, Dave Fronske, was so taken by the sentiment of 'The Red Flower,' that he personally distributed it to all of the juke boxes in the local restaurants in Flagstaff. The radio DJs in Flagstaff also played it a lot - so I had my 15 minutes of fame pretty early in my career."

Check out his website.
Posted by Lisa Wheeler at 2:48 PM No comments: