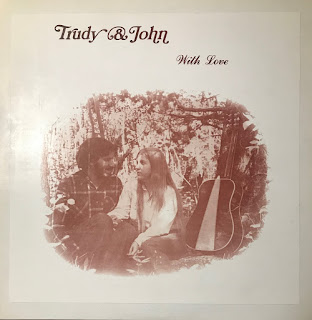 So yesterday, I hit the thrifts in the Longmont area...and unearthed a mother lode of esoteric Colorado records, at various store stops. Over the course of the discovery of my newly-acquired cache, I ventured into Absolute Vinyl, to see my friend, Doug Gaddy, who immediately presented me with an album from an Evergreen couple - Trudy & John With Love.

Upon the first listen of this adult contemporary, faith-based album, I was taken by the haunting softness of the production, along with Trudy Horth's complementary vocals.

"My family moved to Evergreen, from Kansas, when I was 11 years old," Trudy Horth told me, when I contacted she and her husband, John. "John's sister Sue was my English teacher, at Northglenn High School. That's how we met. We started singing together, and got married a year later."

The couple were active members of Evergreen's First Baptist Church, playing in worship bands. Trudy became a prolific songwriter, and after several years of performing her original compositions for parishioners and friends, a co-worker suggested the couple take the next step - record an album.

"So I was actually working with a guy [Geoff Landers] who had a recording studio, and we talked music all of the time at work, and he said, 'Why don't you guys come over, and record?.' said Trudy.

"Packing House Studios was the office for a meat packing company, right by the stockyards," said John. "The building itself said Cattleman’s Association. Geoff bought that and he lived on the top floor of it, and the recording studio was in the basement of it."

While Trudy took on the lead vocals and acoustic guitar, John handled the synth and strings. The couple enlisted the help of drummer Kevin Meilinger (formerly of The Young Weasels), who was a friend of Geoff's, along with Vance Ortiz, on acoustic guitar. "Vance was one of our best friends." said John. "He was in a band with his brothers. They once opened for Strawberry Alarm Clock." Producer Geoff Landers handles acoustic guitar on "Set the Spirit Free." and bass on "For Grandma."

Released in 1983, Trudy describes the album as a contemporary Christian record, with a very personal meaning. "The songs reflect all of those things that are important to us, and we wanted the songs to be a thanks to God. He is not a separate part of my life. He brings my whole life together." 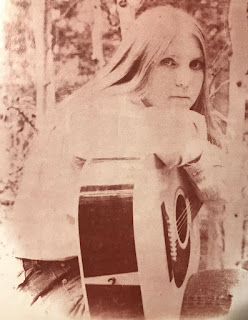 Songs:
Side One
Freedom's Secret
Is it Just a Dream
Elicia
Set the Spirit Free
For Grandma
Turn Around Child

The album was offered to friends and family, but received no promotion or radio play. Trudy says her goal was never to become famous. "We never pursued anything like that. Music is my ministry. My feeling was that I didn’t write the songs, I’m just the one who put it on paper. It was God who wrote those songs. I felt it was such a privilege."

In between their full-time jobs (the couple worked in computer drafting, along with taking on various remodeling and construction projects, including helping to design and build the body molds for Denver's 16th Street Mall electric hybrid buses), Trudy and John went on to raise two children - a daughter, Elicia, and a son, Jeremy (who tragically died, in 1998). They would later produce five other recordings (on CD), and tour Japan and Europe, as a musical ministry. They are currently working on additional material, for future releases.

"Basically we build things," said John. "We also built a lot of street rods. And we are building another house... and still working on the music."

After 46 years, living on a mountain top in Evergreen, the couple moved to Missouri, in 2015.

"We started a new phase of a music career in Missouri," said Trudy. "The church we attend is a little country church, and I’m the choir leader."

Posted by Lisa Wheeler at 6:16 AM No comments: 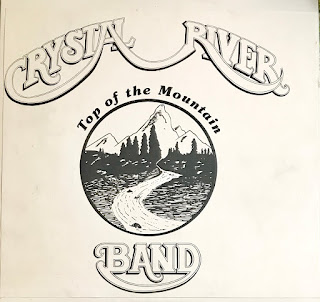 So I'm digging through the mountain of bags and boxes, from the move up to Denver, and rediscovered a recent addition to the Colorado stash, courtesy of Austin, at Recollect Records.

I put this fantastic homemade bluegrass disc on the turntable, and my ears perked up, when I heard this catchy, and oh-so-appropriate chorus, which became an instant unpacking earworm:


Listen to "Here I am in Denver"

I hit the Internet to see if I could find out more about the Crystal River Band. It didn't take long to locate former-member Russ Rueger, who graciously offered to tell me more about his involvement in the band, and the recording:

"I joined the band in the fall of 1982. A friend brought me to a small bar that was at the intersection of Hog Back Road and I-70, in Golden. A bunch of guys were jamming, and I joined in on harmonica. They invited me over to their next practice, and I brought a guitar and mandolin. Over the next few weeks we played a lot in the basement of a house, in Arvada, and Saturday nights at the same bar. The band settled into six of us, and we named ourselves "The Crystal River Band," after the river out by Carbondale. The band was: Andre Lefebvre - guitar picker and banjo; Charlie Mueller - bass; Kevin Knudsen - rhythm guitar; Kent Knudsen - banjo; Dan [didn't recollect last name] - drummer, and me on mandolin-harmonica-guitar. 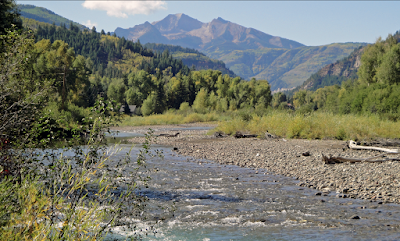 We got into the Medicine Man Saloon up on Lookout Mountain, and became their house band. We played there most Friday and Saturday nights through 1985. We gigged some other clubs in the Denver area, and were the top billing for Bailey Days in 1984 and 1985. We also did a couple of festivals and weddings.

We recorded that album in one cocaine-fueled night in a small studio in Denver. Our drummer had left the band, and the producers brought in a studio drummer [Phil Gonzalez] a few days after our sessions. Mostly I remember being really tired.

We fell apart in 1985. Kevin and Kent disappeared, Andre moved back to Nebraska after a nasty divorce and job loss, Charlie met a woman and spent all his time with her, and I got serious about raising my four kids. I moved the family to Vermont in 1987 [Listen to Russ's new music, on his website].

Here's a pic from our heyday - minus the drummer. Left to right: Charlie, Andre, me, Kent, Kevin."

Russ told me there were probably less than 100 of these LPs pressed. The extensive Slipcue.com website located a copy, and reviewed it:

"I suspect this disc was simply a souvenir of a summer that a few buddies spent smoking pot and picking out tunes by campfires in the Rocky Mountain nights...  There are a few cover songs -- "Ghost Riders In The Sky," Ian Tyson's "Summer Wages," Doc Watson's "Deep River Blues."  It's exactly the sort of stuff you'd expect mellow '70s dudes with guitars to strum along to at a barbeque party or whatever. There are also a fair number of original tunes by mandolin picker Russ Rueger, also in a raggedly folkie vein. Anyway, this is a real record made by real people..."

Of note, and not to be confused, there was also a faith-based Colorado Springs group, going by the Crystal River Band, around the same time period.

Posted by Lisa Wheeler at 11:00 AM No comments: