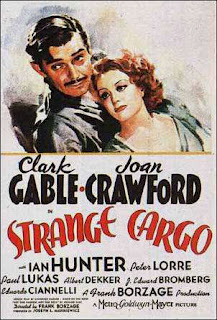 Dan Treanor felt that he had done all he could do in Pueblo. As a member of a number of several successful local bands, including the Steel City Blues Band, Crooks and Hungry Bear, it was time to move up north, to Denver – a route his former Crooks bandmate Kenny Grimes had done earlier.

“I wanted to pursue a full time career in music, so my wife Eleanor and I decided to move to Denver where there were more opportunities,” he said.

Treanor, Eleanor, and Grimes, along with former Pueblo musicians, Monty Bradbury and Chico Apodoca took up residence in the same Denver condominium complex. “We called it Pueblo North,” Treanor said. There the group would jam and write songs.

While in Denver, Treanor kept in touch with Joel Scherzer, the owner of the Pueblo used record mecca, Record Reunion. The two had previously worked together to publish The Pueblo Poetry Project, a book featuring local poets. Scherzer would later enlist Treanor to write the soundtrack for the documentary, Damon Runyon’s Pueblo.

“Joel and his wife would come and see our group play, and on one of those occasions he came up with the idea of putting out a 45 that would feature Pueblo musicians doing some original music,” Treanor said. “He asked me if I could write a couple of songs and get a band together. I jumped at the chance of doing that.”

“My business partner, Marc Shulman and I liked their bluesy, harmonica-driven sound,” said Scherzer, who proceeded to form the Jo-Mar label (a contraction of Joel and Marc), for the project. The only thing they didn’t have was a name for the band.

“I came up with a list,” said Scherzer. “I liked The Rockin' Townies, but the musicians preferred Strange Cargo, the title of a 1940 Joan Crawford movie.” 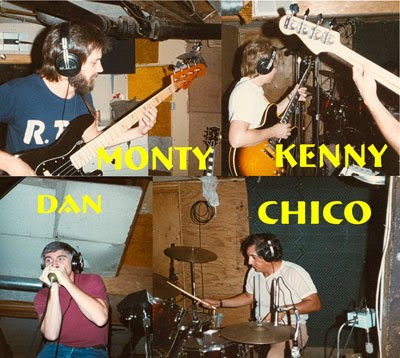 Strange Cargo (clockwise from top left: Monty Bradbury,
Kenny Grimes, Chico Apodoca, and Dan Treanor)
Photos and graphics courtesy of Dan Treanor.
"Black Night Has Fallen" and "Settle Down Blues” - songs Treanor had already been performing with his Denver band, the Terrifics - were picked for the single. The group soon booked a date at Colorado Sound Studios.

“We went in and recorded the whole thing in about two hours, he said. “We did it old school, played all the instruments at once, with no over dubs,” said Treanor. “You can hear all the influences of each musician on the record. I'm a bluesman, Chico's thing is jazz, Kenny can play anything on the guitar, Monty is a great bass player, but specializes in country.” 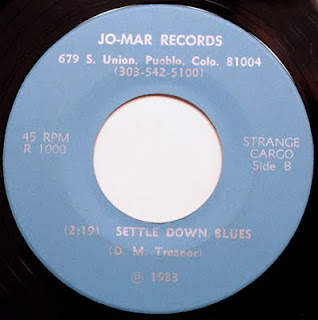 
Treanor estimates about 300 records were pressed, and sold at Record Reunion, in 1983. Shorly thereafter the one-shot group disbanded, and its members went on to other projects.

Strange Cargo never played any gigs together, and never recorded another record. 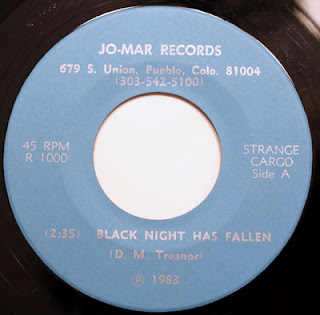 
Grimes and Bradbury would go on to play in Cactus Jack, a Denver country band. Treanor would make a guest appearance, playing harmonica, on the band’s first album.

Chico Apodoca went on to play with the Rendon Brothers and the Tony Romo Jazz Band, for a number of years. He is still playing the jazz circuit in Denver.

Dan Treanor keeps busy with Dan Treanor and the Afrosippi Blues Band – considered one of the top blues bands in Colorado, playing about 200 concerts a year.

COMING NEXT POST: Two guys and a doll...
Posted by Lisa Wheeler at 12:35 PM No comments: 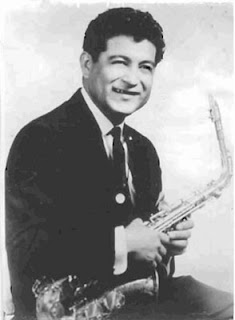 Born in 1935, in Bronte, Texas, to bass player Jesus Gutierrez and his wife Tibursia, Rudy Gutierrez grew up surrounded by music.

“When my grandfather saw that my dad had an interest in music, he helped him form a band. I believe my dad was somewhere between 10 to 13-years old – he was known as the ‘youngest band leader in Texas’ back then,” said Rudy Gutierrez Jr.

href In 1954, after a number of years performing around Texas, Rudy Gutierrez moved to Colorado. Several of his family members followed, setting up a new base for the band. The group was quickly establishing themselves in the Pueblo area, but homesickness for Texas eventually split up the family. While a majority of the band headed back to the San Angelo area, cousin (and trumpet player) Danny Gutierrez and Rudy decided to make a go of it in Pueblo.

By the 1970s, the Rudy Gutierrez Orchestra became a regular fixture around town, playing in various clubs, including Gutierrez’s own Tico Room on Northern Street. 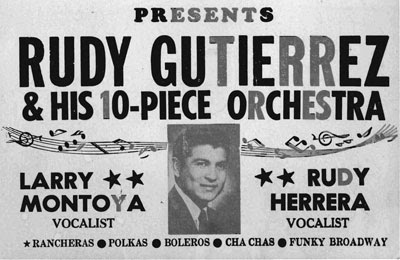 Due to their popularity, and the demand of their audience, the band began to record their music. Gutierrez created the Flamingo record label, which was based out of his Pueblo home on 6th street.

While unsure of the total, Gutierrez Jr. estimates that his father released close to a dozen singles.
Performing traditional ranchera, balero, and cha-cha styles, the band enlisted the help of Paul Romero, who took over as lead vocalist on the early recordings. 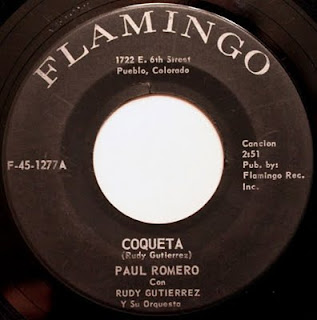 
On the later recordings, singer, and organist Larry Montoya would lend his talents to the band. 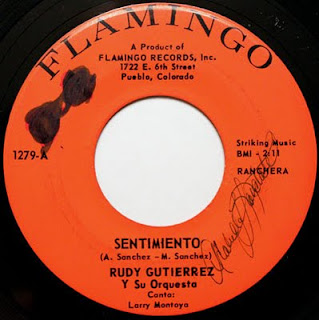 “Larry Montoya was sensational,” said Gutierrez Jr. “I was blown away each and every time he got behind the keyboards. You couldn't help but stare and listen. His improvisation style was so hypnotizing.” 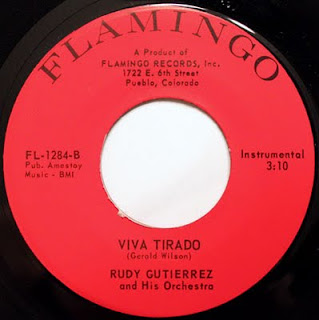 Rudy Gutierrez had established himself as a showman, giving his audiences their money’s worth with often marathon-long shows.

“Seeing them perform live was awesome,” said Gutierrez Jr. “Man the band would stretch and groove. He played his sax with a lot of heart and took his time during solos to say what he wanted to say musically.”

Rudy Gutierrez died September 1, 1975. The group would carry on as the Gutierrez Orchestra for a number of years, before disbanding.

His son, Rudy Gutierrez Jr., would go on to follow in his father’s footsteps as a local musician. He is also a published author, Rudyville.org.
Posted by Lisa Wheeler at 12:34 PM No comments: