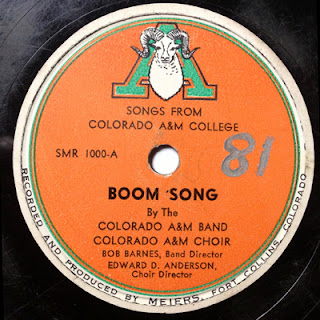 One night, while searching for Colorado records on a certain online auction site, I stumbled upon this 78 rpm record, from a seller in New York.  I had never seen a pre-Colorado State University recording, and at $9.99 and free shipping, I didn't think twice to "buy it now."

After I received it, I did a search for any information, only to come up empty-handed... that is until I contacted John Hirn, the volunteer athletic historian for Colorado State University, Fort Collins.

"That record is somewhat of a legend in CSU history," he said.  "I don't know the exact year it was produced, but sometime around 1953 is the best I can give you." 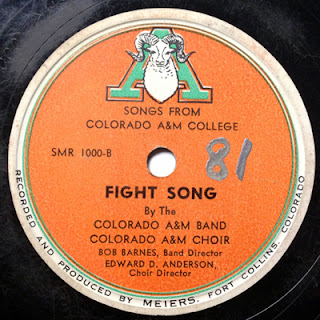 "The Fight Song you have on this record is the original incarnation of what CSU has as our fight song today," Hirn added.  "It was written around 1928 by Dr. Richard F. Bourne, but not commonly used until later on in our history. You will note they say 'Fight on ye Stalwart Aggie Team' rather than 'Fight on you Stalwart Ram Team' like we do today. There are other subtle changes to the lyrics of the 1950s version and today's fight song. 'Aggie Boom Song' was another original Aggie song sung beginning in the 1910s and used into the 1950s."

According to Hirn, the record I found was actually one of three from a set, which also included "Alma Mater" on side A, and "On Wisconsin" on the flip.  The contents of the third record are a mystery.  Apparently both records were issued in a green and orange folder, with the words "Colorado A&M" on the front.  The inside shows pictures of the campus, choir, and the band, with lyrics of the songs. If anyone has the folder, or the mystery third record, let me know...

"'On Wisconsin' is in there because the original fight song for CSU was called 'Come on Aggies' and it was sung to the tune of 'On Wisconsin.' It dates to 1915 and was used until 1955 or so," Hirn said.

I was curious about the mascot (the ram) and the use of "aggies" in the song.  Again, I turned to Mr. Hirn.

"In 1945, Colorado A&M students voted to adopt a ram as the school's mascot, and for the next 20 years there was a struggle among students, alumni, and other fans to call them the Aggies or the Rams. Finally in 1966 the school totally dropped Aggies as a team nickname. The ram logo was being used more and more in the 1950s. Our football helmets had ram horns on them, even though our 1955 basketball team wore uniforms with "AGGIES" written across the chest. A different ram logo seemed to pop up constantly at this time. So this logo, which has an "A" along with the ram head, is a perfect example of how the school was known by both nicknames."

For more information about Colorado A&M and its history, visit Coloradoaggies.com
Posted by Lisa Wheeler at 5:23 PM No comments:

I've already admitted that I bleed orange, so I thought it fitting that I start the 2013 NFL football season with yet another Denver Broncos-related vinyl find. 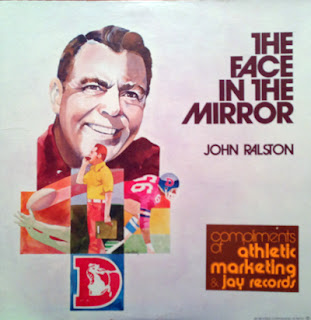 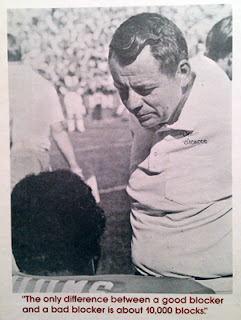 Ralston rode on the coattails of the Broncos turnaround, going on public speaking tours, touting his secrets to winning. His "think positive" talks were a hit with sales conventions, where The Face in the Mirror was apparently recorded (no note of where or when on the disc).

Unfortunately it would not be Coach Ralston hoisting the Lombardi trophy.

1976 was a make or break season for the coach, who had taken a beating in the media (and the fans) for the 6–8 record the previous year.  While the team went on to finish with a 9–5 record, it was not enough to get them in the playoffs. To add insult in injury, Broncos players issued a protest vote of no confidence in their coach and Ralston resigned at the end of the season.

It would be coach Red Miller who, in 1977, took the Broncos to their first playoff appearance, and ultimately first Super Bowl, where they were defeated by the Dallas Cowboys, 27–10 (of course, we all know how it ends in 1997 and 1998).

Ralston went on to be the assistant coach of the Philadelphia Eagles, the San Francisco 49ers...and the Toronto Argonauts.  He later became head coach of the USFL Oakland Invaders, and the Dutch (Netherlands) Lions.

Posted by Lisa Wheeler at 5:21 PM No comments: