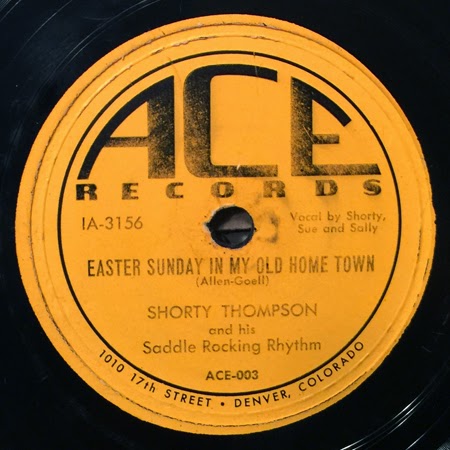 Found this holiday appropriate 78rpm - the second Shorty Thompson disc on the Ace label in my collection (also have Ace 001 "Colorado Rose" / "Baby I've Got the Goods on You"). Maybe 002 will turn up, someday.

There's already a ton of bio info about Shorty on the Internet, so I won't copy and paste here (I mention a bit about him in a past blog post on Dave Spielman and his Rhythm Rangers). That said, I can't find ANY information on this release.  Every discography I have found on Shorty fails to mention this record.  Can't imagine stumbling upon a rarity here, but who knows.

Happy holiday...
Posted by Lisa Wheeler at 6:06 PM No comments:

NOTE:  DivShare has been acting up (again) and a good chunk of my audio has disappeared.  Sorry if you have tried to listen to the samples and instead hear the the sound of silence. Going through the monstrous task of moving over all of the DivShare audio on here to my own hosting and embedding my own player.

I'm a sucker for the whole song-poem genre. For those unfamiliar, the concept was this: Write a song (or poem), then pay a company to take your composition, set it to music, back it with studio singers and a band and viola, you have a record! Check out the outstanding American Song-Poem Music Archives site.

Take for example Virginia Unrein of Montrose, and her ode to her nautical love, Sailor Joe. 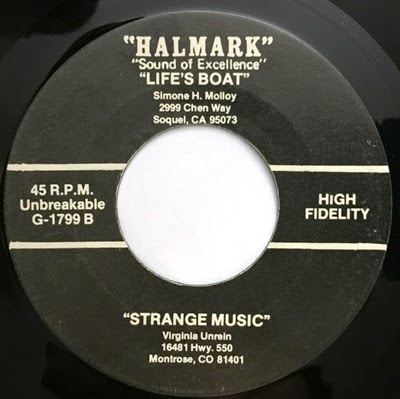 Listen to a sample of "Strange Music"

No idea on when this was recorded, or who the studio singer is.  Virginia's song appears to be part of an EP with three other folks who handed over a few hundred bucks to the prolific Halmark label.

Virginia left this world in 2013. Her obituary mentions that she "successfully wrote and published several of her own songs on CD."
Posted by Lisa Wheeler at 2:45 PM No comments: