Cindy Bertram and Her Band 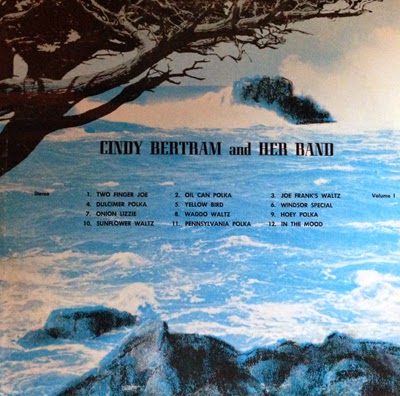 October has me in a polka mood.

Found this LP on a dig in Colorado last spring. Standard issue vanity pressing with no year noted, and no markings whatsoever (but pressed on groovy blue vinyl!).  I really didn't need yet another Colorado polka record, but then I flipped over the album, and saw this pasted picture. 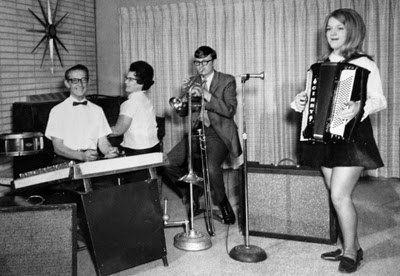 I totally want to hang out with these people.

Back of the album is autographed by Cindy (on accordion), keyboardist Rachel Bertram, Tom Schell on trumpet, and on dulcimer, Paul C. Strickline. 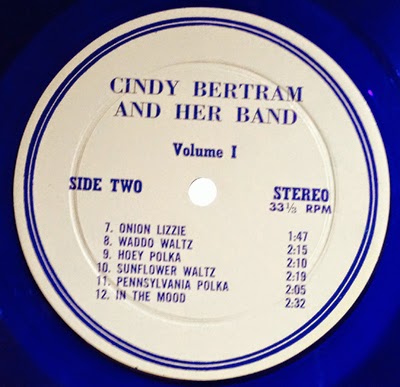 Typical polka numbers here, but I got a kick out of the accordion version of this Glenn Miller standard.


Listen to a sample of "In the Mood"

Quick Internet search finds that Cindy attended Adams City High, in Commerce City (the same school that hatched the surf-rockers, The Shelltones), and graduated in 1971 (NOTE:  Commerce City was home to the prolific Infal label).

Newspaper archive searches show that Cindy and her band were active through 1974, performing at the Blue Willows Lounge (formerly the Dutchman Inn), in Greeley.

Digging around the Internet shows that Rachel passed away in 2005. Can't find any other information on the other band members. Sent a few e-mails to some Cindy Bertrams I located online.  Alas, none were she.
Posted by Lisa Wheeler at 5:44 PM No comments: 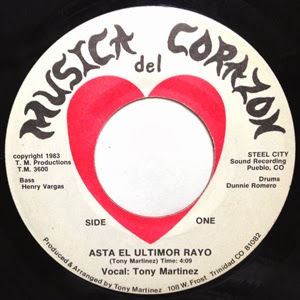 I've had this Trinidad single for quite a few years, but haven't been able to find anything on it.  In an effort to clear out some of these neglected discs in my collection, I thought I would post it on here.

Nice Hispanic single by Tony Martinez.  Lots of guesses on this one.  Internet doesn't really help much.  Band members are noted on the label, so that fills in a few holes. Found out that drummer Felipe "Dunnie" Orlando Romero, Sr. passed away in 2013. Bassist Henry "Hank" Vargas was later in the Rocky Ford-based group Chickens of Depression.

I'm pretty darn sure that the Tony Martinez on this record, is the same who appears on the Flintstone Brothers single "Hungry Hungry Hungry," recorded at Norman Petty studios (note the name "Dunnie" on the label), as well as the Shag label single, also noted below. If anyone has any additional information, or can provide audio of these two records, drop me a line. 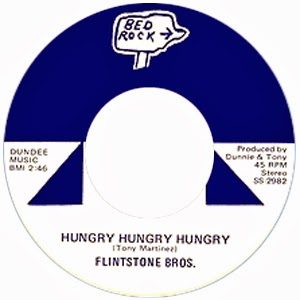 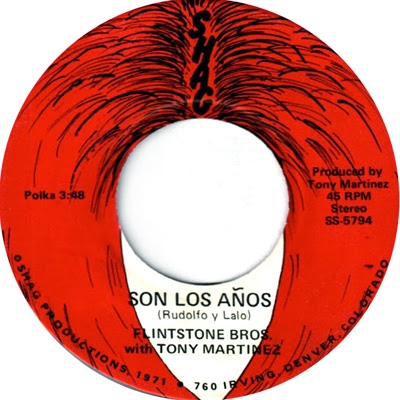