Blind Tom - "One of the Greatest Wonders of the Age" 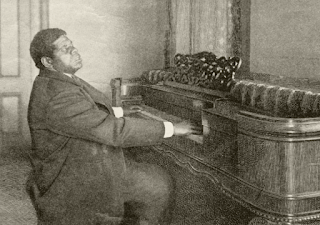 NOTE: This piece is also published in the January 2022 issue of the Pueblo County Historical Society The Lore.

In the early stages of Pueblo’s history, live music entertainment was limited to the Choral Union, Pueblo Cornet Band, or the newly formed city orchestra. On occasion, a “traveling troupe” would pass through on the way to a larger venue. Nationally known musical acts often limited their tours of Colorado to Denver, or Colorado Springs.

In May 1878 the Colorado Daily Chieftain announced a concert by “the greatest musical prodigy living,” the visually-impaired pianist, Blind Tom. 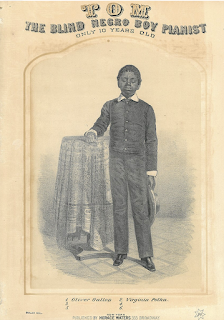 At 29-years-old, Tom Wiggins had already been performing, for almost 20 years. Growing up as a slave, along with his mother and father, he was often hired out by Georgia plantation owner General James Neil Bethune to entertain his antebellum friends. His ability to audibly memorize thousands of pieces of music, and then play them back on a piano, was considered “a wonder.” He was quickly marketed as a P.T. Barnum-style freak, with often cruel advertising of him as a transformation from an animal to an artist. As word quickly spread about his abilities, he would leave the plantation and travel the United States, often performing four shows a day, making about $100,000 a year for General Bethune, who acted as Tom’s co-manager.

By 1873 he had arrived in Denver, for four nights at the Guard Opera House, his first appearances in Colorado. “Blind Tom’s engagement here was a rich treat to all who heard him,” the reviews read.

In Pueblo, the Colorado arrival of what would become one of earliest African American musical superstars would only receive a small newspaper mention. “Blind Tom, the negro musical monstrosity, who has been astonishing large audiences in the principal cities of the United States, is giving entertainments in Denver. The metropolitans are wild with excitement, of course,” the Chieftain noted. 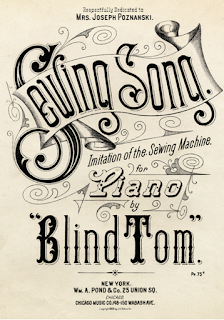 As Wiggins popularity grew, he began writing his own compositions. Sheet music pieces were sold at his shows, as souvenirs for attendees. Titles included “The Battle of Manassas,” “Blind Tom’s March,” and even a novelty piece “Sewing Song,” where the piano imitates a sewing machine. For reasons unknown, later Blind Tom pieces used composer pseudonyms including Professor W.F. Raymond, J.C. Beckel, C.T. Messengale, and Francois Sexalise.

In 1878 he made his way back to Colorado. His tour included Denver, Colorado Springs, various mining towns and finally, Pueblo. The news of his long-overdue local appearance included a more glowing description of his abilities, as compared to the “musical monstrosity” narrative, five years earlier. 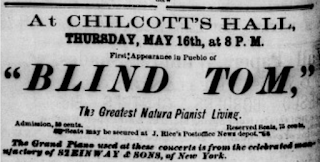 “Mr. Theodore Warhurst, the avant courier for Blind Tom, made us a pleasant call yesterday. This musical prodigy will entertain our people on the night of May 16. He is, undoubtedly, the greatest musical prodigy living.” May 1, 1878 – Colorado Daily Chieftain

His Pueblo concert was considered one of the most anticipated events, that year. The local paper ran daily ads, and promotional stories which bordered on equal parts public relations enthusiasm and side show hype. “Blind Tom, one of the greatest wonders of the age, will visit our town on the 16th. There is hardly anyone in the country unacquainted with this musical prodigy. He is perfectly blind, who has not the mental capacity sufficient to attend to his own wants, and hardly sufficient to understand even a common place conversation, yet he is the perfect master of the piano.” As reported in the May 9, 1878, issue of Colorado Weekly Chieftain.

His sold-out, standing room only concert, at Chilcott’s Hall had patrons standing out in the street, hoping to hear the event. “Quite an audience thronged Santa Fe Avenue and Sixth Street last night, in the vicinity of Chilcott’s Hall, to listen to the playing of Blind Tom. They made some noise, and appeared to appreciate the performance fully, as well as those in the hall.”

But not all of the reviews were supportive of Wiggins’ performance. While classical concert attendees applauded his musical skill, many were confused over the “side show.”

“We had the pleasure of hearing the musical prodigy Blind Tom on Thursday evening. We didn’t fully appreciate the program, as too much time was taken up with Tom’s foolish speeches. Such a musical wonder should not be exhibited for such nonsense. The fault is not in the performer, for he is especially fond of the very highest order of composition, but a general audience likes a popular program, better.”

Little did anyone know about the behind-the-scenes management of his career. General Bethune’s son had taken over bookings of Wiggins, and promoted him as a novelty act, or “a human parrot,” as one critic wrote. When John Bethune died in a train accident, in 1884, his ex-wife Eliza took custody of Wiggins.

Wiggins would return to Colorado, in 1895. He would play Pueblo, one last time on January 18, at the Grand Opera House. Sadly, his visual impairment, odd stage antics, and lack of communication continued to be highlighted, for the sake of ticket sales.

“A helpless idiot, with scarcely sense enough to know when he’s hungry, or to feed himself when he’s hungry, yet endowed with a musical gift far beyond the average musician,” noted a story in the January 15, 1895, Colorado Daily Chieftain.

The concert included a variety of musical selections, including his own compositions. He also included “piano imitations” of various other musical instruments and sound effects, to a receptive audience. 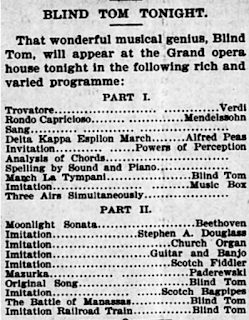 A glowing review of the concert, published by the Chieftain, downplayed any previous behaviors which were deemed a novelty act. “It would be a multiplication of words to attempt to describe the wonderful talent for music this man has. There never has been his equal. In his playing of high-class compositions, he displays his marvelous memory and appreciation of the fine phrasing in them. His playing is perfect.”

In April 1908 Tom Wiggins suffered a major stroke. He died the following June. He was buried in the Cemetery of the Evergreens in Brooklyn, New York. His story has been the subject of numerous books, documentaries, songs (Elton John’s “The Ballad of Blind Tom”) and artistic murals. The residents of his hometown, Columbus, GA., erected a commemorative tombstone for him, 68 years after his passing.

A Denver Christmas LP and the Mysterious Death of Bobby Bizup 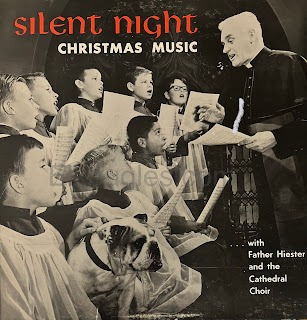 There is no easy way to segue a Colorado Christmas record with the story of a suspicious death of a child, but sadly these two go hand in hand. Just giving you a heads-up that this post takes on a (very) disturbing note.

The Cathedral Choir was founded in 1912, by the late Rt. Rev. Joseph J. Bosetti (1886-1954). It was based at the Cathedral of Immaculate Conception (located at 401 E. Colfax), and made up of a volunteer group of Denver-area men and boys, from Catholic parishes around the city. 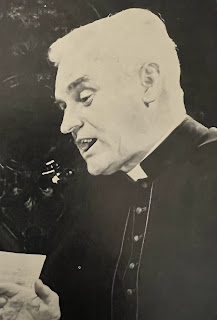 This 1964 LP credits Monsignor Richard Hiester, who took over the group after Monsignor Bosetti passed away. The album features the voices of 64 men and boys, who perform classical Christmas selections. Vocal soloists include Mike Hannigan, William Trinnier, Rose Enevold, and Ray Kellogg. It features organist Alan Hobbs and harpist Helen Lunn. No clue on the bulldog pictured on the front cover. 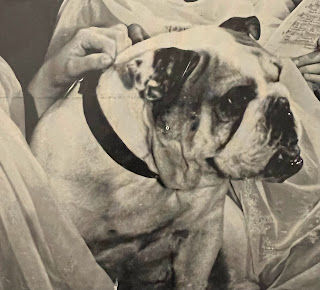 Now for the horrific connection.

Rev. Hiester's name would be linked with the death of Bobby Bizup, the ten-year-old, hearing-impaired boy who went missing at Camp St. Malo, in 1958. Hiester was the camp director, at the time. While he was never implicated in the case, the death cast suspicion on other priests, who worked at the camp. To this day, nobody has been charged with a crime. Bobby's partial remains would be found, in 1959. In a bizarre twist, a skull was discovered in the possession of Tom McCloskey, the son of Dr. Joseph McCloskey – a prominent member of the Catholic Church and a close friend of the Rev. Hiester. The skull has been turned over to the FBI, which is conducting a full forensic evaluation.

Joseph McCloskey died in 1980, and Tom McCloskey said he took possession of the skull a couple of years later, unaware of its history.

Earlier this year, Denver's 9News called attention to the unsolved case, which continues to intrigue the public, 63 years later (link to 9News documentary on the case) According to the investigative report, "Father Hiester told reporters that Bobby had been fishing and had failed to follow a counselor and other boys back to the main lodge for dinner. A search party went out that night, and within days hundreds of people, aided by bloodhounds and aircraft, were in the woods looking for the boy." At the same time, National Park Service documents obtained by 9News show that "Rev. Neil Hewitt discovered the bone and piece of clothing on July 3, 1959. However, Father Hiester didn’t report it to the park service until three days later, on July 6."

Monsignor Hiester died in 1993. He is buried at Mount Olivet Cemetery. 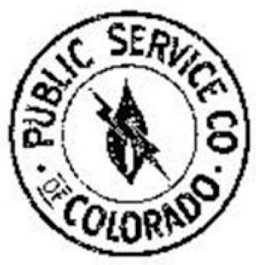 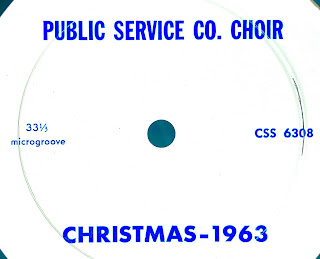 Listen to the intro (additional information at :43)

Conductor Forest Fishel (1899-1982) was the choir teacher at St. Joseph Catholic School, and later head of the music department at the University of Denver. 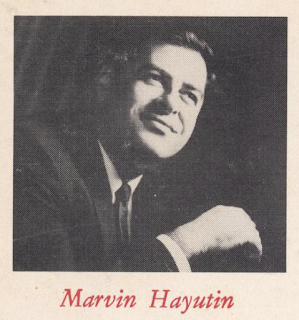 So I recently got a message from a reader who asked me why I don't feature classical music on my blog.

Good question. I own up to the fact that it's not really a genre I know much about, but that's not an excuse, as the Internet pretty much makes anyone an instant expert.

Here's a 1956 LP I recently found, at the big thrift chain here in Denver. 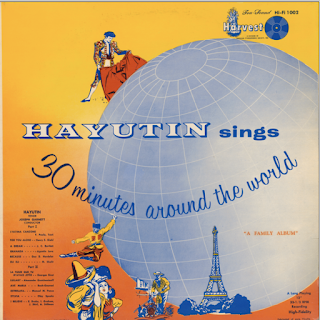 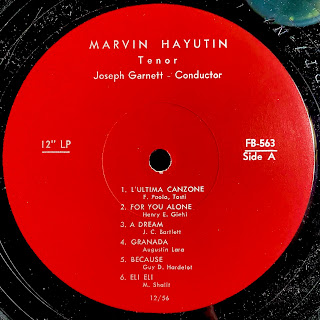 The album is from classical tenor Marvin Hayutin. As a bonus, the find also came with song listing brochure, with a Denver address on the envelope.

Let's do some research... 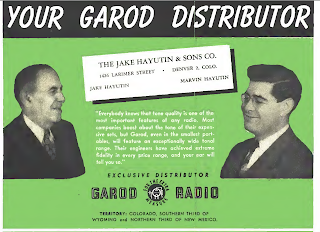 Born in 1916, Marvin Hayutin attended West High School, and worked with his father as a Garod radio distributor, in Denver.

The time between 1945 and the 1956 album above is not well documented. The liner notes of the album mentions that he studied voice with Florence Lamont Hinman (Denver's Lamont School of Music), Katherine Bowman, and Horace Davis. Apparently he also worked on Wall Street, at some point.

Found a 1959 Billboard mention of his LP I Saw You Smile - "An album with the appeal of all members of the family with pop tunes, waltzes, religious selections, and children's songs. Pleasing tenor voice." Also reviewed in Cash Box, it was described as "much delight." 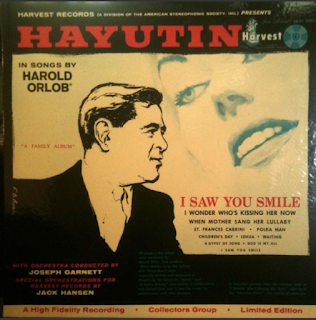 He also released the album Songs My Mother Taught Me.

Hayutin was also a music composer, as I discovered a copyright reference for the songs "The Chop Top Song" and "Pat Cat." Harold Orlob is also credited. The co-composer was well known for his "I Wonder Who's Kissing Her Now," made famous by everyone from Bing Crosby to Harry Nilsson.

Marvin Hayutin passed away in 1973, at the age of 57. He is buried at Mount Nebo Cemetery, Denver.