Attention obscure Colorado music geeks! Guess who is back on the radio? 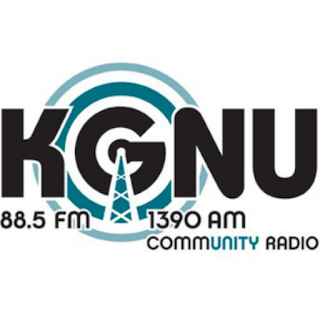 I'm going to be back on the radio, this Friday, playing a sampling of esoteric selections from the deep, dark depths of my rescued Colorado vinyl stash. 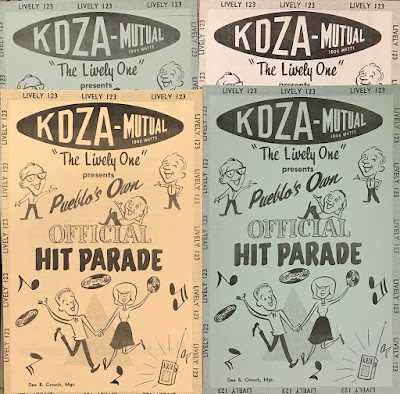 March 23, 1963: The Beatles release the Please Please Me LP, and the number one song in Pueblo was "End of the World," by Skeeter Davis. Pueblo record buyers headed to the Crown Discount Center, on W. Fourth Street, to pick up the latest Top 40 singles (and the newest Elvis LP for $1.99)... and KDZA radio was the #1 station in town. Yeah, Pueblo was boppin' 55 years ago, this week.

An acquisition of several KDZA Pueblo radio "Hit Parade" lists recently came into my possession, this week - almost exactly 55 years ago from when they first saw the light of day.  How cool is that? 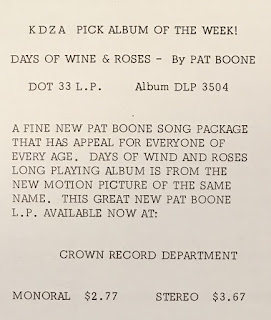 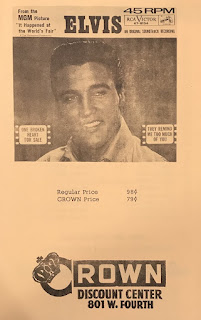 March 10, 1963
#1 song: "Ruby Baby" - Dion
KDZA Album Pick of the Week: The Night Has a Thousand Eyes - Bobby Vee
Plus The Crown Discount Center offered the Elvis single "One Broken Heart For Sale" for $.79 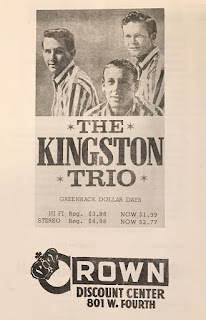 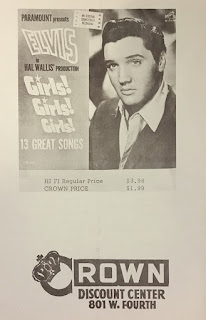 Sadly, none of these earlier hit lists show any disc jockeys, but Dee B. Crouch is listed as station manager. According to a 2003 story, written by Dwight Hunter, in the Pueblo Lore (the Pueblo County Historical Society magazine): In 1947, Crouch led a group who formed the Pueblo Radio Company and put Pueblo’s third radio station, KDZA-AM, on the air. That station survives today as KKPC. 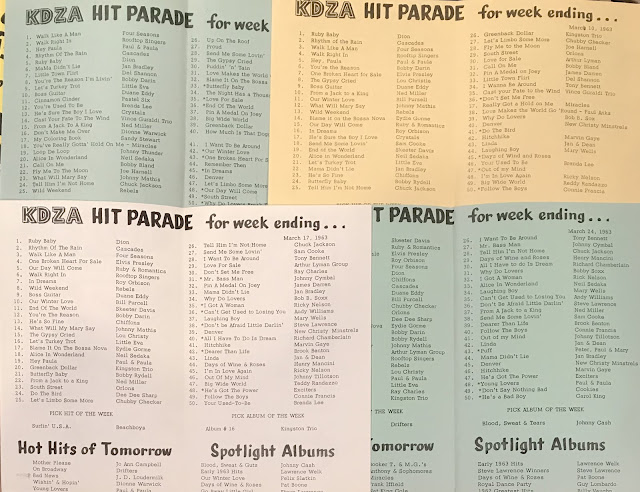 Posted by Lisa Wheeler at 3:00 PM No comments: 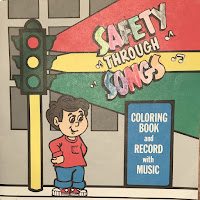 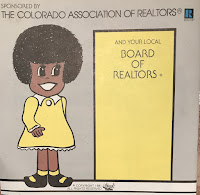 I love (and collect) radio public service announcements. The fact that, in 30 or 60 seconds, you can creatively convey an audible message aimed at encouraging or preventing something, has always fascinated me. Maybe it was the decades I spent doing radio, and the level of creativity I often heard on these messages, which made them so enduring to me. Who knows.

So, I'm in a local thrift, when I spot this coloring book and record combo, from the Colorado Association of Realtors. Cool, a Colorado and a PSA score!

Released in 1981, the association promoted safety tips to the kiddies with a coloring book and 7" 33rpm record of 10  tunes, complete with a coloring page for each tip (plus sheet music and lyrics).

"Each year, many Coloradoans of all ages are injured or killed in preventable accidents, and many more are victims of crime." Geeze, if that doesn't put the fear of God in the kiddos, what will? Nothing a catchy little number can't resolve. 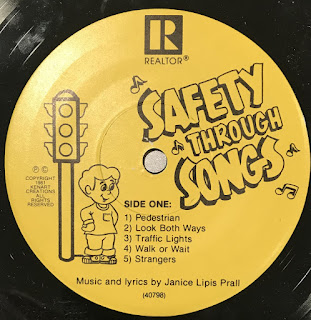 The "Safety Through Songs" public service campaign was endorsed by Governor Richard Lamm, who penned the "Open Letter to Parents" on the inside (along with the state's Commissioner of Education and the Director of the Division of Highway Safety).

Credits show music and lyrics by California-based Janice Lipis Prall, who also went on to produce a similar PSA campaign, "Sing No to Drugs." 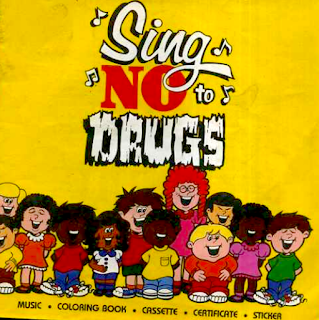 Posted by Lisa Wheeler at 5:50 PM No comments:

Just when I think nothing can surprise me, whilst digging for obscure southern Colorado music, along comes Louis J. Kapel.

My dear friend Joel Scherzer clued me in to this Pueblo singer, when he found a total of four 10" 45 rpm recordings, which he offered up to me. I filed these away, until a recent databasing project provided me the opportunity to finally listen to these additions.

First off, this guy is like nothing you have ever heard, coming out of the Steel City. His smooth, 1950s pop-meets-lounge style vocals are spot-on Rat Pack. The test-pressing recordings show an address, south of the state fairgrounds, and various dates from 1959-1961. Not a lot to go on, but a quick search on the National Copyright Database shows a Louis John Kapel was active during those years, along with co-writing credit to daughter, Terry Sue Kapel. 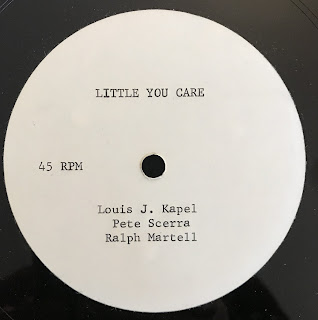 Listen to a sample of "Little You Care" 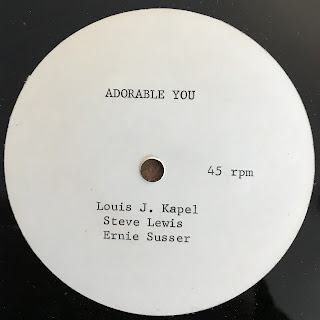 Listen to a sample of  "Adorable You"

"Adorable You" credits Steve Lewis and Ernie Susser, as co-writers. Susser would later pen songs for Bonnie and the Denims ("Time Will Tell") and Cowboys N' Indians ("Jack in the Box"). "Never to End, But to Begin," which was co-written by his daughter, Terry Sue, features an uncredited female vocalist. I'll put money on it, that it's Terry Sue. 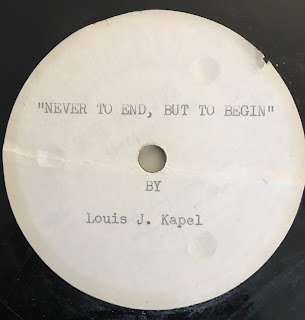 Listen to a sample of "Never to End, But to Begin"

The final recording appears to have been made in 1961, at the Ace Recording Studios, in Boston, MA (as noted on label). 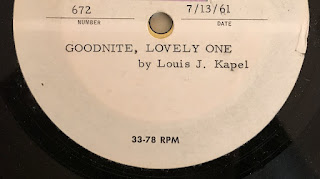 Listen to a sample of "Goodnite, Lovely One"

If that doesn't make you want to shake up a martini, while sucking on a Pall Mall, I don't know what will. Further digging finds that Louis was stationed in Abilene, TX, at Camp Barkeley, and is mentioned in a 1941 local newspaper story on a new bandstand being built, by him, and "Pvt. Mark Predovich, Leadville, CO." 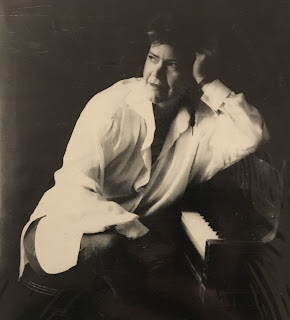 While attending the Vintage Voltage Expo, today, I heard news that Kathi "Katzi" DeFrancis passed away, on March 15. Kathi was a fantastic Denver femme folk artist, who put out a stunningly beautiful LP, in 1985, Home Before Morning. 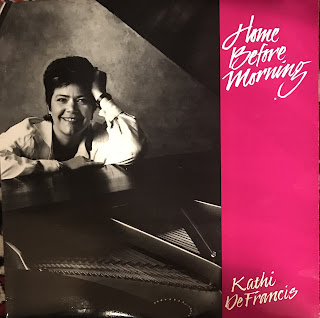 Listen to "Farewell to Silver Plume"

In 1973, Kathi was a founding member of The Mother Folkers, a group comprised of a dozen female Denver-area performers. Kathi would leave the group, 20 years later, but it continued on, in her absence.

A Facebook page has been set up, in her memory.

Ironically, while at today's Vintage Voltage show, I found a copy of Kathi's 45 release of "The Magic Song" / "San Antone" just a few minutes before finding out about her death. 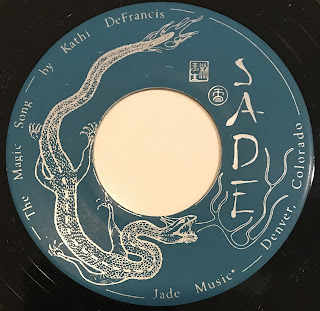 Posted by Lisa Wheeler at 5:49 PM No comments: