Super Bowl XLVIII is a distant memory.
Am I in denial of the outcome? Nah, just no sense dwelling in the past. When it comes to the Denver Broncos, for better or worse, I am forever a fan. 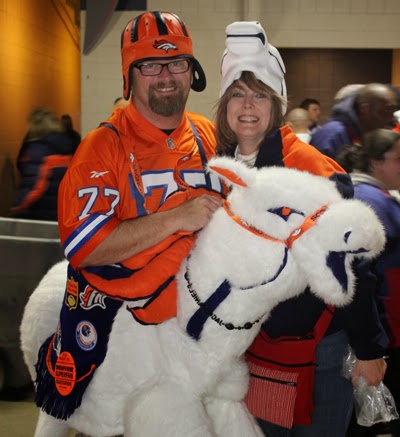 The author (right) with a fellow Broncos fan at Mile High

On my last trip home I discovered a Sam Adams-sized (look him up) cache of Broncos-related vinyl.  Just when I thought there were no more odes to the blue and orange, I found more records to add to the collection.

See part one of the stash here.

First up, yet another find from the illustrious Orange Crush years, courtesy of Sebastian Bastian. 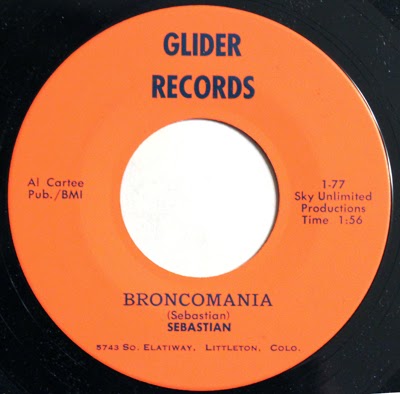 You got the touch down, mini pony ridin' high
And the pony express, they're looking their best
And the fans in the stands, you bet you'll be impressed
Get ya some Bronco crushin rock and roll
Let the Bronco mania reach your soul
There just ain't no offense that can win
When Red's Denver Broncos kick a hole in the fence... and run free, running free.

Duane Wilbanks, with help from Tom Gregor (former Cindy Wheeler band drummer, and later the owner and engineer of choice at StartSong Studios in the Springs) penned a disco-tinged song to celebrate the team's 13-3 AFC West Champs, 1984 season. 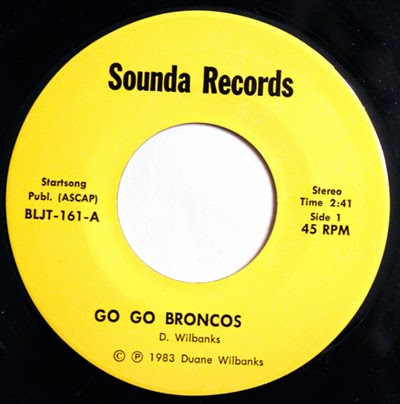 Supposedly this next record, the overly redundant "All the Way with Elway," by the Boots Band, came as an extra in the Denver Post home delivery (can't imagine how many of these broke when they were thrown on porches). 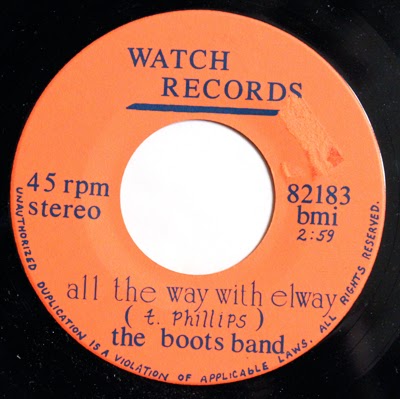 Reggae-infused, Jimmy Buffett-style tribute to number 7 and his "sons," by the Orange Fanatics. Not sure how Butch Johnson and Steve Watson would feel about the lyrics. 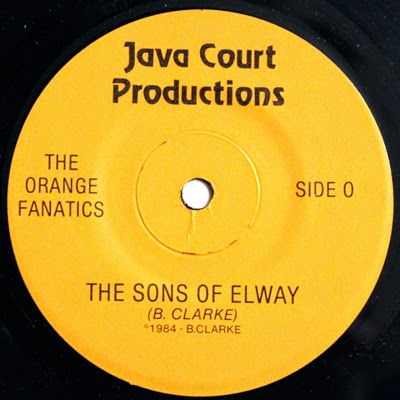 Saving the best for last here.  The Denver prog-influenced band Flucrums Image also got into the Broncosmania wave of 1984, with this I-have-no-words-how-much-I-love-this record.

"You looked like you could have been me, after all we're both 23...
although I'm not a superstar, a human being is all you are." 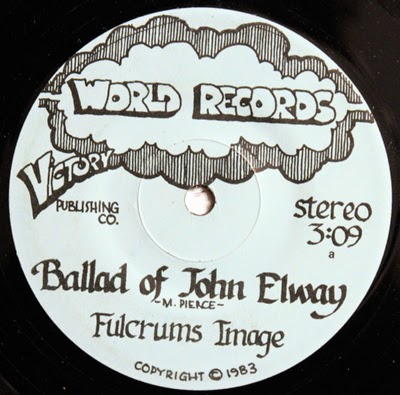 Posted by Lisa Wheeler at 5:42 PM No comments: 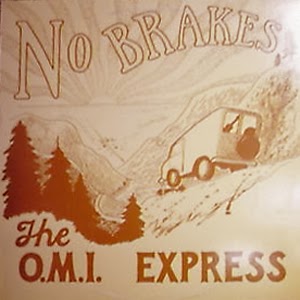 In 1976 guitarist Jim Lamb, and his longtime friend, drummer Dave "Duke" Arnold, were looking for a couple of other players to be in the club band at Jim's bar, The Old Miners Inn, in Creede. The duo recruited mutual friend and former Tennessee Hat Band and Tumbleweed keyboardist Sam Hendricks, and another local player, bassist Ron Ueckert.

They called themselves OMI Express.

After several years together, playing covers and some original songs, the band thought it was time to record an album.

"A friend of ours, Bob Roberts, was working at the University of Texas, at their new recording studios," Ueckert said.  "He invited us to come to Austin, for a trial run on the new equipment. It was during the Christmas break on the campus, so nobody was around when we recorded."


Listen to sample of "Can't Change the Rules"

As the band's live audiences back home favored the OMI Express flavor on cover songs, the band decided to add a couple, as well ("I Got a Line On You," and "Magic Carpet Ride").


Listen to a sample of "Magic Carpet Ride"

The round trip, made in the band's Ford van, became the inspiration for the LP's title.

"Not only did we have several flats getting there and back, we also ran through a stop sign, because the brakes went out," Ueckert said.  "It ended up costing us about $1100 to repair everything. We had no brakes."

Returning to Creede, the band continued to play for several years until the original foursome lost two of its members, Sam Hendricks, and founder Jim Lamb.

"Sam left to go back to Austin to get his doctorate in chemical engineering, and Jim took a job playing with David Allan Coe."

"It was our tribute to Jimmy," Ueckert said.

A 1994 story in the Pueblo Chieftain noted a Lamb Jam Community Benefit Concert, including Tom Dessain, Bruised Bones, Laffing Buddha, The Feggarri Bros., Zoomin' Noomin', Tumbleweed and the OMI Express. Proceeds went to the Jimmy Lamb Memorial Fund which is given by the Creede Elks as a scholarship for a Creede High School senior.

David “Duke” Arnold went on to play drums in the Gunnison bands Blue Moon, Hwy 149, and Sneakers. He passed away in 2008. That same year Ron Ueckert held a benefit concert for him at the Old Miners Inn, in Creede.  Accompanying him were drummer George Egbert, saxophonist Rich Gallegos and guitarist Rob "Robear" Bosdorf.

Sam Hendricks stayed in Austin, and is currently the keyboardist for Flounders without Eyes.

Ron Ueckert has a carpentry business in South Fork, CO. He still occasionally plays around town.
Posted by Lisa Wheeler at 2:38 PM No comments: