Alex J. Chávez was born two miles east of Capulin, Colo., on November 9 (1922 according to his obituary, 1923 as noted on his album covers). He attended La Jara High School - six years ahead of Dorthy Sowards

After graduation, he would spend World War II serving three years in the United States Army, with the Seventh Army Headquarters.

Accompanied by his second wife Virginia ("Ginger") Stoudt Chávez (whom he married 1954), he moved to New Mexico, and began teaching choral music in the Albuquerque ISD, including Sandia High School.

As a regular at the Three Cities of Spain restaurant in Santa Fe, and the New Mexico Folklore Society, he would entertain audiences with the Mexican-American folk songs of his upbringing in the San Luis Valley.


In 1965 he financed and recorded his first LP, El Testamento - Spanish Folk Music of Northern New Mexico and Southern Colorado (Century Custom Records 22376), a collection of 14 traditional songs of the region. 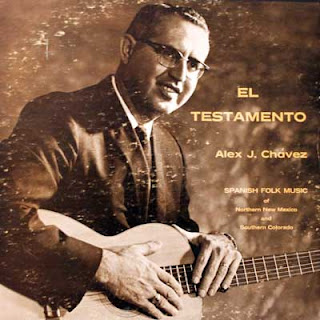 "I believe this song to have originated in the San Luis Valley; specifically southern Colorado, because this is an area in which it is the most familiar to the people; also because researchers dealing with Spanish music of New Mexico origin do not number this among their collections." - El Testamento liner notes.

During this period of his life, Chávez would go on to perform at the Smithsonian Folklife Festival in Washington D.C., as well as the Scottsdale Folk Festival - he also earned the coveted National Folk Association Burl Ives Award.

Leaving the Albuquerque School District, he took a position as the Assistant Professor of the Music Department at the University of New Mexico. In 1971 he recorded his second LP, Duermete Nino (Custom 39908). Pictured with two of his children and his wife Virginia on the album cover, his second effort has more of a family feel, with play songs and lullabies. 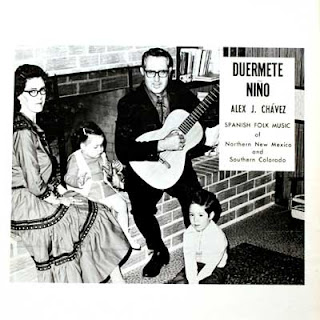 
Chávez and his wife Virginia often appeared together during performances. Virginia Chávez , who was an English and speech major, would provide narrative background and translation during her husband's concerts.

Chávez, who fathered eight daughters and two sons, would retire to Ocean Springs, Mississippi in 1997. He remained active in his church choir.

El Testamento - Spanish Folk Music of Northern New Mexico and Southern Colorado has been recently remastered and made available on compact disc, through the University of New Mexico.

COMING NEXT POST: Norbie Larsen
Posted by Lisa Wheeler at 1:26 PM No comments: 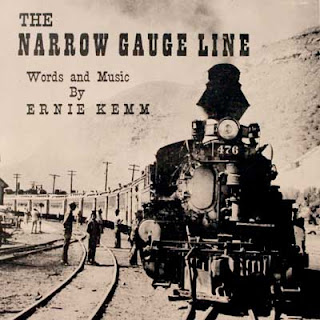 On July 4 1961, The Durango and Silverton Narrow Gauge Railroad was designated as a U.S. National Landmark. To commemorate the authorization the city fathers hired Ernie Kemm - who would later pen "Here's to Colorado," the state's official centennial song.

"We began performing together as a duo in Denver with Al Fike," said Tom MacCluskey. "Ernie was playing piano, I played drums, and sometimes piano."

When Kemm received the call to write the Narrow Gauge record, he had a regular gig at the Back Door in Denver. He enlisted the help of MacCluskey to arrange the recording, and put together a group of studio musicians.

"I actually hired some of the best jazz musicians in Denver to play on it," MacCluskey said. "I had Neil Bridge on piano, and Derryl Goes on drums, who later toured with Stan Kenton." 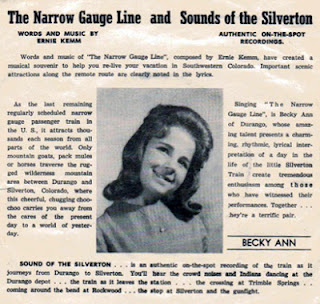 "I never even met her," said MacCluskey. "We laid down the instrumental tracks and she overdubbed her voice - she wasn't in the studio." 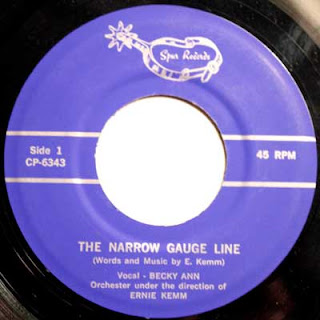 Listen to "The Narrow Gauge Line"

The b-side of the single - "The Sound of Silverton" - features sound effects of the train.

"...authentic on-the-spot sounds recorded at departure time at the D&amp;RGW depot in Durango, will capture your imagination as you hear the train actually whistle, the drumbeats and bells of the dancing Indians, plus the call of "all aboard"....

The single was later re-released on the Durango label (Durango 101-year unknown). 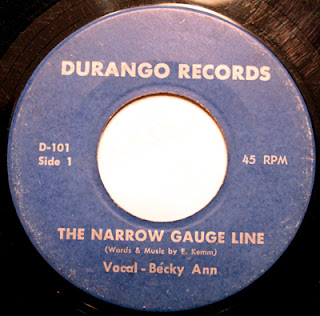 Tom MacCluskey, who had previously never been to Durango, moved to the town in 2000, and is now a regular performer at the Mahogany Grille. He also hosts a Sunday morning classical music program on KDUR radio.

Shortly after the release of the Narrow Gauge disc, Kemm released another record on the Spur label, "The Trail They Call the Navajo / Songs of the Navajos." He would also go on to record for the Denver-based Band Box label ("Here Kitty Kitty" / "Larimer Square" - Band Box label 369).

In 1965 Kemm left Colorado for New York City. He is now a regular cruise ship performer. He was unavailable to comment on this story.