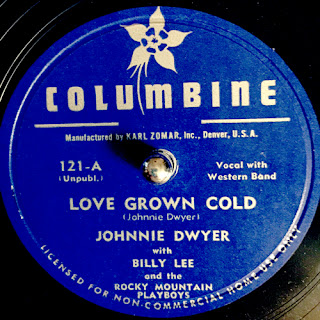 This one is a bit of a head scratcher. Credited on the pre-Band Box label Columbine as Johnnie Dwyer with Billy Lee and the Rocky Mountain Playboys. As there tended to be several bands calling themselves the same thing, I have no clue whether these guys are affiliated with Hank Locklin's, Jimmy Snow's,  Rocky Rauch's Rocky Mountain Playboys.

A 1949 issue of Desert Magazine notes:


Johnnie (Johnny) went on to record at least one single on the Dee Jay label, re-recording "Love Grown Cold," with The Pike County Players--again there apparently was more than one group calling themselves that (sigh).

That said, this is a sweet country ditty.
Posted by Lisa Wheeler at 6:00 PM No comments: 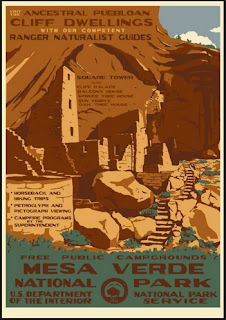 Lots of great memories going to Mesa Verde National Park, as I'm sure everyone does. However, I never climbed the Balcony House ladder, nor do I recollect seeing Esther the mummy - not sure how I missed that experience. Guess it's time to go back for a visit.

Eva-Tone red flexi on "The Mesa Verde Story."  Runoff shows 61071AXT, so guessing this is a 1971 recording. No indication who is voicing "Ranger Bill," or who is providing the Native American chants in the background. Cool little souvenir. 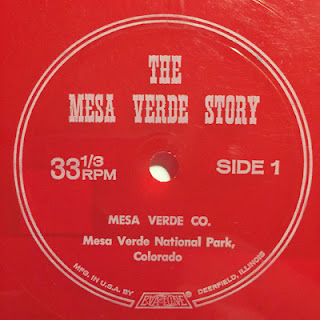 Listen to an audio sample
Posted by Lisa Wheeler at 2:50 PM No comments: