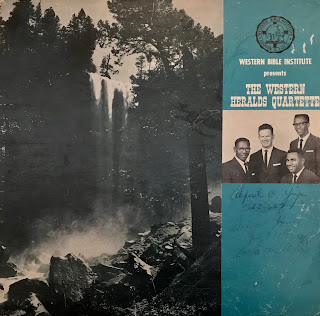 I admit, I have an affinity for obscure Colorado religious records. While most collectors shun the genre, I have become a safe haven for any and all.  And why not? I mean, church-goer, or not, some of these recordings are pretty damn, er I mean, darn good.

The members of the group got together, while students at the Western Bible Institute, in Denver. The school, founded in 1948, was later merged with Rockmont College, to become Colorado Christian College. Now you are caught up on that part of our story...

In 1956, the Institute decided to diversify its classroom attendance, and launched a foreign exchange missionary program. Students, from different parts of the world, were offered scholarships to attend the school. This instantly changed the look of the campus, with students of different nationalities bringing their own international flavor to the little Bible college. 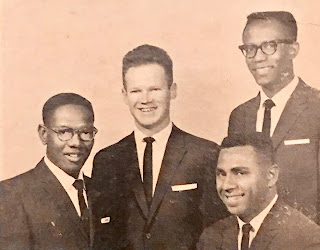 Alifereti Yaya arrived from Fiji. Victor Griffith and Wilfred Hunte came from Barbados - and all three brought with them a love of not only the holy word, but also the holy song. They soon teamed up with Larry Morehead - who came all the way from...Denver - and began singing four-part harmonies in the dorms.

Somehow the group caught the ear of higher-ups at the school, who thought their talents could serve as a promotional opportunity. In 1961 they headed to the recording studio. 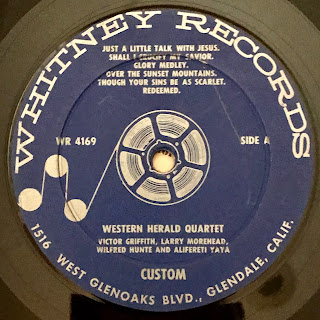 Released on the custom Whitney Records label, the Western Heralds Quartette is accompanied by Marie Shuler on organ and Phil Shuler on bass, while Larry Morehead handles guitar.


Listen to a sample of "Jericho Road"

Posted by Lisa Wheeler at 5:52 PM No comments:

When you think of music originating from Pueblo, Colorado, Native American operas don't usually come to mind. So imagine my surprise when I noticed a Pueblo address on the back of Chief Eagle's Wintercount LP. 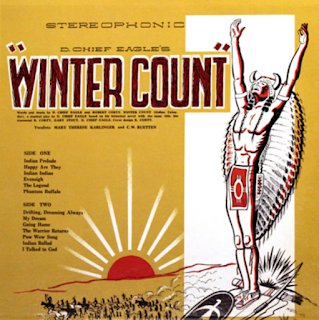 According to the back of the album, Chief Eagle was born in 1925, in South Dakota. He was orphaned as a child, and raised by the elders of his Rosebud Sioux tribe. How he ended up in Pueblo took some digging. 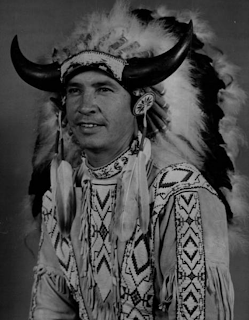 I quickly discovered that Chief Eagle is actually one Dallas Jerome Bordeaux. He moved to Pueblo after serving in the U.S. Marine Corps during World War II. In a 1955 feature story in The Pueblo Chieftain, Bordeaux was described as a "former professional boxer who lost only three of 25 professional fights." He worked at CF&amp;I and was also a cake decorator, and author, penning the book Winter Count - chronicling the Sioux version that General Custer committed suicide at the Battle of the Little Big Horn, in 1876. Bordeaux also was a native dancer who organized powwows in Pueblo and at the Colorado State Fair. He appeared in the movie, "A Man Called Horse." Bordeaux died July 22, 1980, following a heart attack, at the age of 54.

As for the album? No year on the recording, but I can only guess that it came out shortly after his book was published (1967). 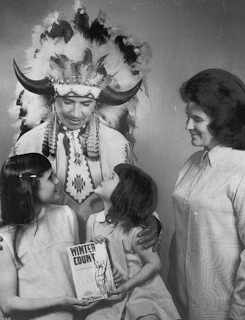 The vinyl features both male and female vocalists - Mary Therese Karlinger and C.W. Ruetten. Ruetten served as a priest, at Holy Family Parish.  Mary Therese Karlinger was born in 1949, in Nebraska. She began singing in pre-school, and appeared on the Slovenian Radio Hour and sang with the Abbey Glee Club, in Canon City. According to an Internet search, she was also the winner of the "Stars of Tomorrow" talent show.

Background music is credited to R. Corty (who was a teacher at Corwin Jr. High School), Gary Stout, and Chief Eagle.

Twy-Mar Studios is listed as a P.O. box in Pueblo, on the back of the album. Another search finds that it was owned by Don and Twyla Martin - the same Twyla Martin who was also part of the Twy Mar Trio, which also included Earl Brewster and Bob Gifford. The group recorded one single, "Listen to Your Heart" (Twy Mar 2251)