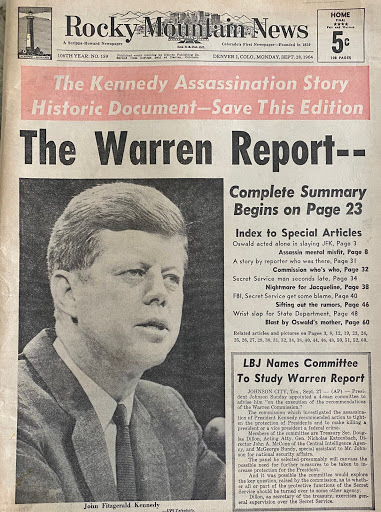 Hey gang! I've recently acquired a huge (understatement) pile of old Denver newspapers. Having a lot of fun going through these, and thought it would be appropriate to supplement the (audio) music posts with some other Colorado music ephemera finds.

Given the date, I thought I would first post some 56-year-old music-related advertisements (and other ads) from the September 28, 1964 issue of the Rocky Mountain News. Hope this brings back some memories.

The newspaper was filled with stories regarding the release of the Warren Report  - the official report on the assassination of President John F. Kennedy.

The 1964 Denver nightclub scene was pretty diverse, with rock/pop, country and lounge acts. Take a look at these ads (click all to enlarge): 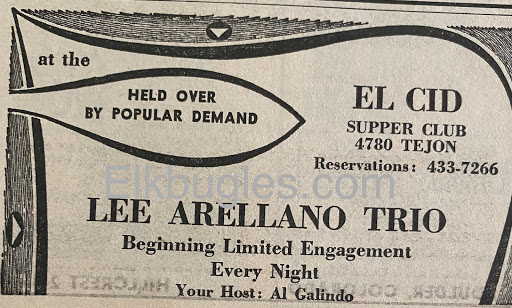 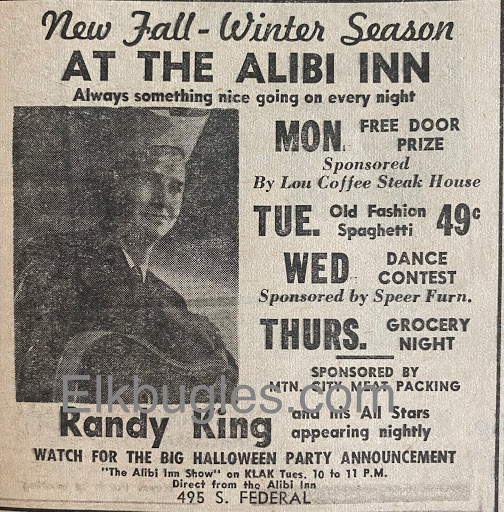 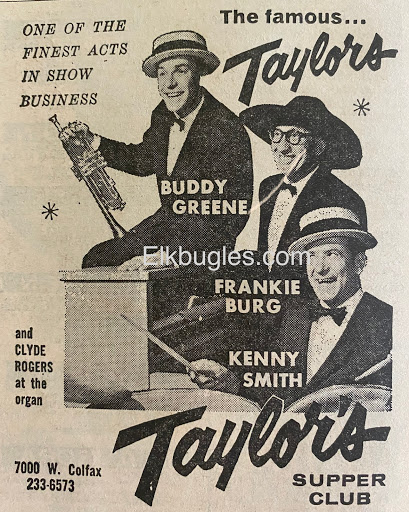 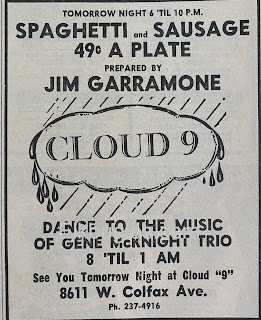 Johnny Rivers, Chad and Jeremy, Ronnie and the Daytonas, and The Ventures
Denver Auditorium - October 10. 1964 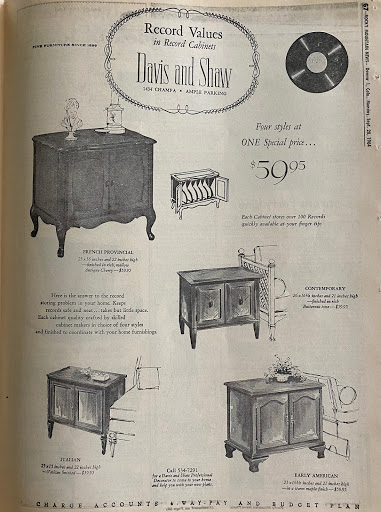 Had to show off this record record cabinet advertisement.
While not music related, I thought you all might like seeing some other advertisements in this paper. 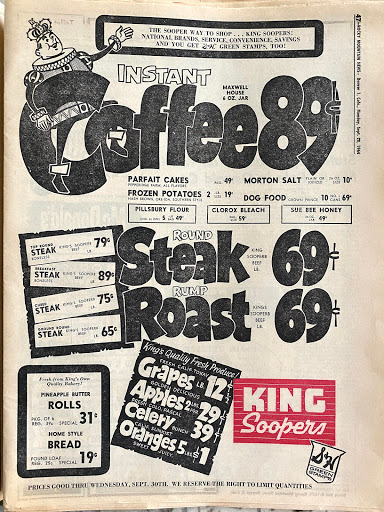 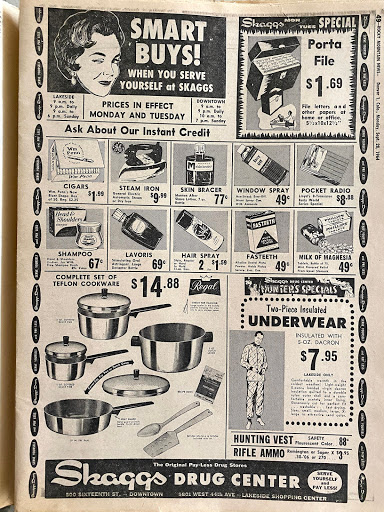 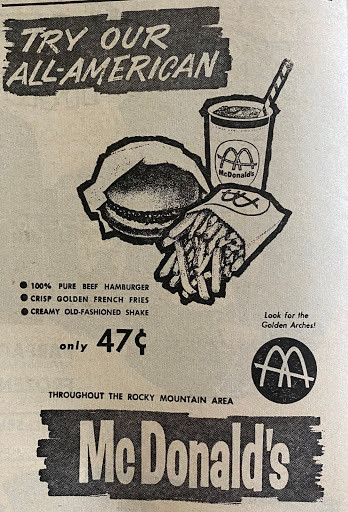 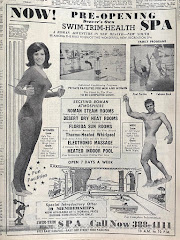 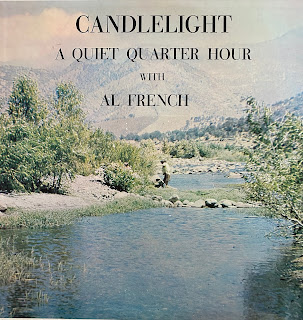 Hey all! During my recent quick trip to the west side of the state, I added to my private issue cover collection, with this LP from Al French, Candlelight A Quiet Quarter Hour, found in a Cortez thrift store. The label showed KCMS (the Manitou Springs radio station and prolific local recording studio), so I knew it had to be something from the Colorado Springs area.

Upon getting back to my turntable, I discovered that the disc, which shows AUDITION ONLY on the label, was apparently a vinyl demo for a proposed national syndicated, locally-produced radio show, originating from KVOR / KFMH, in Colorado Springs. The LP is introduced by George Beatty, a popular local announcer.

"I worked for George at KFMH the last half of my high school senior year, and then some," said James House. "He had a wonderful radio voice and recorded announcements at Alexander Film once a year, the most he could do without joining the union."

"Al French was a teacher at Widefield High School in the 1960s," according to former student, Bobby Kiess. "He did late night radio shows on KVOR. His shows were very smooth and casual."

"Mr French was a new teacher my senior year. He was about six-feet tall and about 180 lbs., with black hair, and the shoulders of a football player," said former student Thomas Rieves. "Every girl in class swooned. He was a great teacher."

Mr. French would often enlist his Widefield students, to assist with the show.  "For those of us who were in his speech class, we could go down to the station and help with the production," said former student Thomas Rieves. "He would read poetry and play mood music. I spent three or four nights at the studio."

Listen to a sample of Candlelight Cameos (4:00)

Interestingly, I could find nothing on the show Candlelight Cameos, which apparently was never heard beyond the Colorado Springs market (not to be confused with the 1950s Davenport, IA WOC-TV show of the same name). No idea how many of these vinyl demos were made, as I can only assume they were discarded if a station wasn't interested in the idea. Or, is it possible only one of these records was made?  Either way, I'm guessing this is a very rare piece of recorded Pikes Peak radio memorabilia. Amazed it survived.

As always, if you have anything to add, please contact me.

Posted by Lisa Wheeler at 8:57 AM No comments: 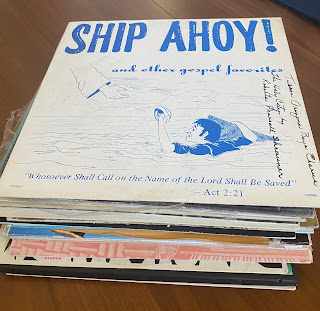 Took a much-needed break from life, and spent four days in the western section of Colorado - hitting state parks, and record digging, of course (grin).

It seems, here lately, that I've hit the mother load of faith-based Colorado records. While I was in Durango and Montrose, I discovered a honey hole of two dozen unknown state-made religious vinyl pieces (picture above). While I know the genre is not everyone's bag, I had to share at least one, which was previously unknown to me - Ship Ahoy! by Rev. Gus Kubish.

According to the liner notes of the album, in his younger years, he took singing lessons from Helen Griggs, the aunt of Cliff Barrows, who served as Billy Graham's music director. With his game show host looks, one has to wonder if the televangelist circuit tried to recruit him for mass media. 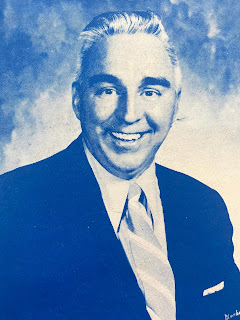 Released on the prolific Garden Sight and Sound label, of Colorado Springs, Ship Ahoy! includes your typical religious album selections, accompanied by Rev. Kubish's formally-trained vocals. Upon listening to this LP, there is an obvious disconnect with the singer's vocal style and the band. You have to wonder if the (uncredited) backing group was trying to "hip" the reverend up to a more-modern, dare I say "lounge feel" take on these standards. 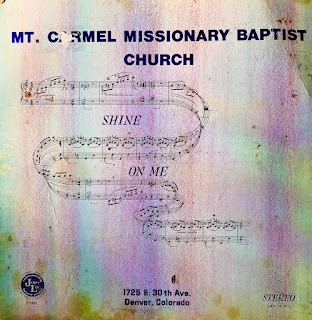 When is a Colorado LP too trashed to purchase?

Found this almost-beyond-saving album on a recent big Colorado thrift chain crawl, this month. It had two major things going for it, in spite of its beat-up cover, and sliced and diced vinyl condition - it was obviously a Colorado record album, on the prolific Colorado Springs label John Law Enterprises, and... I had never heard of it.

Yup, much like the crazy cat lady who can't abandon a homeless feline, I'm a home for cast off Colorado vinyl.

I've had lots of luck with John Law label records. Nine times out of ten they are gospel records, which most collectors don't give the time of day. 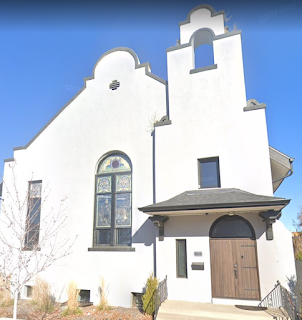 The Mount Carmel Missionary Baptist Church (1725 E. 30th Avenue), located in Denver's Whittier neighborhood, was the central meeting place every week for gospel services, led by Rev. D.M. Servine, Jr. According to the liner notes, Rev. Servine took over the Mount Carmel pulpit in 1969, after serving in Louisiana, Florida, Texas, and California. 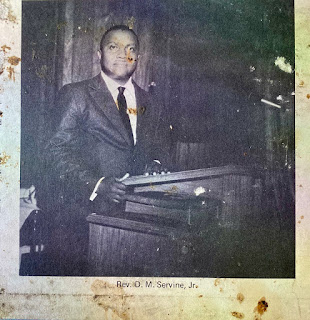 I couldn't find a year on the LP, entitled Shine on Me, but based on my other John Law record catalog numbers, I estimated in came out in 1971-1972. 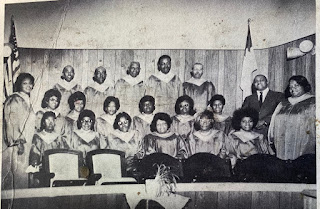 The LP is filled with gospel selections, performed by the adult choir and directed by Mrs. Mary Hoover, who also provides the vocals on the stand-out cuts.


Listen to a sample of "On the Battlefield"
(1:20 - one of the few audio samples I could get, minus skips)

The church structure has an interesting history, all by itself. Built in 1907, the mission style stucco building was known as the East Side Christian Church, until 1926. In 1929 it was renamed Mt. Pleasant Baptist Church.  Between 1946 and 1962, the church became one of three properties owned by the Macedonia Baptist Church, before becoming known as Mount Carmel Missionary Baptist, and finally New Testament Holiness Church. By 2016, the structure sat abandoned, and fell into disrepair (much like this record album).

In 2017 the building hit the Denver real estate market, and sold for $420,000. After two years of renovation by the new owners, it was turned into a stunning six bedroom (and seven bathrooms) Airbnb property. 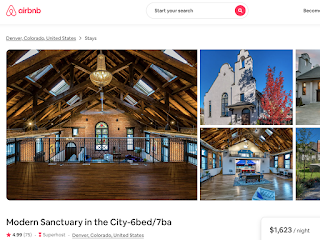 Posted by Lisa Wheeler at 8:30 AM No comments: 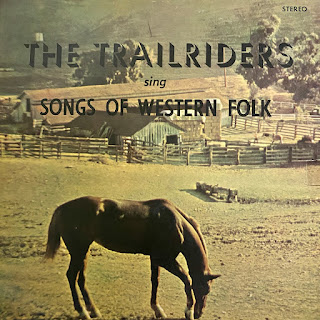 Hey all! Doing a bit of online record digging, and spotted this private issue LP by the Colorado Springs group, The Trailriders.  Spent more than I normally do ($16), but holy pork and beans on an open fire, I'm glad I roped this in.

First off, full disclosure, I love folk music. That fantastic 1960s hootenanny, three guys (or gals) and a guitar, singing about war and peace and Tom Dooley. Love the harmonies, the simplicity and the feeling. When I put the needle on the album, yup, I went to that special place...


Listen to "A Cowboy Has to Sing"

Is that a toe tapper, or what? The whole disc is filled with folky trio offerings, with a country tinge. A real joy to listen to, in its entirety. The album was recorded at the C.M. "Bud" Edmonds KCMS radio home garage studios, in Manitou Springs (68 Minnehaha Avenue). 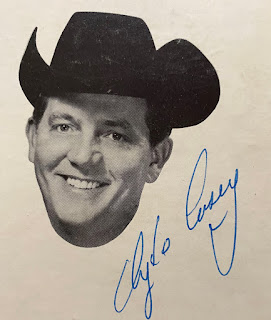 Clyde Casey (1932-2015), who sings lead on that song, was the group founder. Interesting background on him - As the El Paso County Director of Purchasing, he helped create the city's 911 system, the Pikes Peak Performing Arts Center, and various county parks. According to his obituary, he also "refurbished the General Palmer statute so that it would survive another 100 years." He later relocated to Roswell, NM. 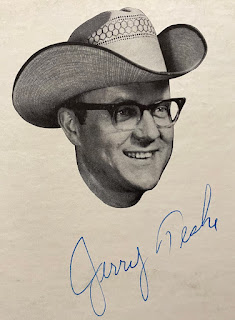 Jerry Teske (1930-2017) was the choral director at Palmer High School for ten years, then later supervisor of music in District 11, until his retirement. Among his other musical accomplishments - he sang at Figaro's Restaurant, in the Grace Episcopal Taylor Choir, Colorado Springs Chorale, Abendmusik, Colorado Opera Festival, Opera Theatre of the Rockies, and the Celebration Multicultural Ensemble. Jerry also appears on the 1975 "Official State Marching Song of Colorado" single, entitled "Hail Colorado" (which I featured in 2018). 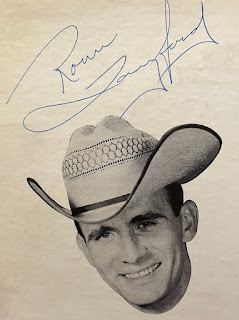 Ronn Langford is the last living member of the original group. He was once a member of the Ivy League Trio, a folk group which recorded on the Coral record label (he replaced longtime member Bev Galloway and appears on Folk Ballads from the World of Edgar Allan Poe LP [YouTube link]). Later in life he became a race car driver, and now runs his own successful driver's education company. 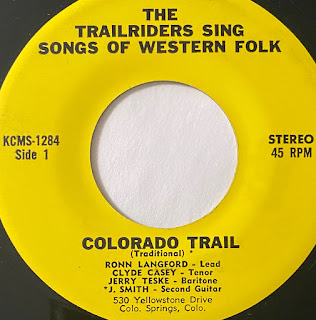 As luck would have it, I found a Trailriders single in my own Colorado 45 stash, "Colorado Trail" / "Land of the Velvet Hills" (cuts from the album above). The single would include guitar virtuoso Johnny Smith (June 25, 1922 – June 11, 2013), who wrote "Velvet Hills." Smith was a jazz guitarist, who wrote the classic instrumental, "Walk, Don't Run" (YouTube link) in 1954 (which was a huge hit for The Ventures, in 1960 and 1964 - YouTube link). He moved to Colorado Springs, where his daughter and his mother lived. While in Colorado he ran a musical instruments store, taught music, and raised his daughter, while continuing to record albums for the Royal Roost and Verve labels into the 1960s. 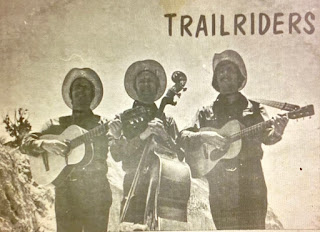 A few years later The Trailriders released another LP, minus Ronn and Clyde (who were replaced by Bill Moon and Rob Ryder).

Posted by Lisa Wheeler at 7:30 AM No comments: