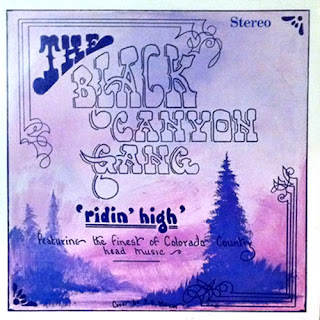 Thought I would play one from the fantastic mellow Colorado country LP, Ridin' High "(featuring the finest in Colorado Country head music)," from the Black Canyon Gang.


Listen to "Alcopulco Gold"
(yes, that's how Acapulco is spelled in the title--
no need to send me a typo correction)

The Black Canyon Gang (Montrose/Olathe area brothers, Bill Bland Austin and Russell Austin, Robert Dale Mount, Bart Lyons and Paul Hunter) signed on with promoter Dick Woods, who worked extensively with Gladys Hart, the Colorado country music promotions queen. According to a 1975 issue of Billboard, Woods purchased Mountain Records from Ethel and Steve Mengee. The story goes on to report that Woods also signed Mike Bowman and Dick Kerns to his new label, along with the Black Canyon Gang. The LP was recorded at Viking Studios, in Denver.

In 1974, the band was on the bill for the first annual Telluride Bluegrass Festival.

Categorized as singer/songwriter "hippybilly," the Black Canyon Gang made a resurgence this year, when the band's song "Lonesome City" appeared on the Numero Group compilation, Wayfaring Strangers: Cosmic American Music.

According to the liner notes: "The Black Canyon Gang were a group of farm hands who simply enjoyed making music together: “The boys spent afternoons playing music, hunting rodents, drinking beer and smoking herb." As Black Canyon Gang vocalist and electric guitarist Russell Austin reflects on that decade, he recalls, “Apathy was everywhere. We gave a generation of weary downtrodden youth hope. It actually brought hippies, rednecks, bikers, warriors and regular people together … We were trying to make it through a rough time in history and help as many people as we could. And it worked.”
Posted by Lisa Wheeler at 5:57 PM No comments: 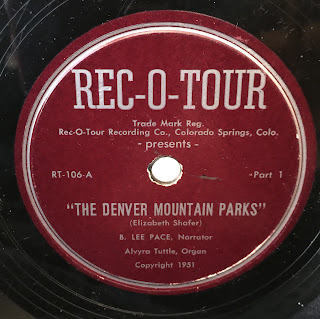 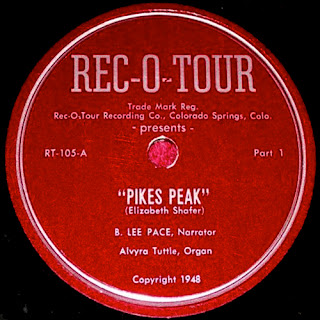