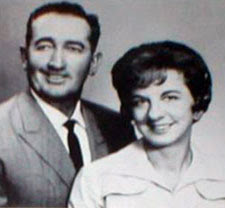 In the fall of 1943, Vaughn Sowards decided to take a break from college. The then 19-year old came back home to Manassa, located midway between the New Mexico border and Alamosa, Colorado. While there he took in a football match-up between his high school alma mater, Manassa High School, and their arch rivals, La Jara High School.

“He kept watching me in the stands, said Dorthy Sowards, who was a then 15-year old La Jara sophomore. “And I started watching him.”

After the game, Dorthy and her friends went for a soda at a nearby café – and he just happened to show up.

"He was very shy," she said. "He sent a waitress over to tell me that he wanted to talk to me."

The two began dating, and realized they shared a common bond – they loved to sing.

“We would go on dates, and go off where nobody could hear us, and sing,” she said.

The couple stayed in touch, even after Dorthy and her family moved to Arizona, and Vaughn joined the U.S. Navy.

Right after Dorthy graduated high school, the two married, and moved back to Manassa, where they took up ranching – but they never stopped singing. Before too long, word got out about the couple, who were soon being booked for weddings, funerals, and conventions.

In the winter they would move to Arizona, where they made a living singing around Phoenix. In the summers they would come back to Colorado, where their talents were beginning to get noticed.

“One of our friends heard us sing, and mentioned that his son knew producer Norman Petty, in Clovis,” Dorthy said. In 1965, the couple packed their bags and headed across the state line to put their songs on vinyl - where Buddy Holly had previously launched his career.

Needing studio musicians for the recording, Petty enlisted the help of the Fireballs who two years earlier scored a national hit with “Sugar Shack.” The group was looking for gigs, after their leader, Jimmy Gilmer left for an artist management and record production job in New York. The session produced two singles, the folk ballad, “Between Two Trees,” along with the Porter Wagoner hit “A Satisfied Mind,” (which was later recorded by Bob Dylan, the Byrds and Johnny Cash). The second record was the duet’s take on two Webb Pierce hits “Slowly,” and “That’s Me Without You.” 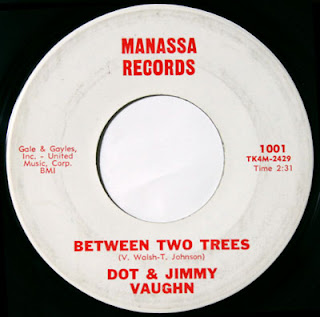 Listen to "Between Two Trees"

Before the records were pressed, the couple had one more professional decision to make.

“Vaughn is a hard name to pronounce,” said Dorthy. “He was always called Jimmy in high school, so we thought it sounded more professional to be known as Dot and Jimmy Vaughn.”

The records were put out on the couple’s own Manassa record label. 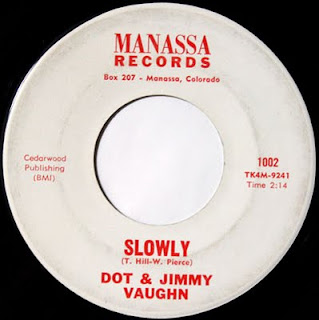 Listen to "Slowly"
300 copies of “Slowly” were pressed, and sent to radio stations across the country.

“It was picked in Billboard, as an up and coming record,” Dorthy said. The song also caught the ear of national agents and producers – but the timing was not right for the couple.

“They all said they could make us big stars, but at the time we had an auto accident, and the thought of traveling on the road was not something we wanted to do.” 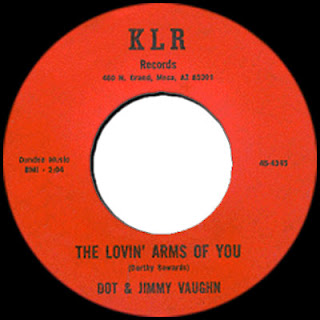 The couple would release a third single, also produced by Petty, and accompanied by the Fireballs, the Dorthy Sowards-penned “The Lovin’ Arms of You” and the b-side, “Hayseed” on the KLR label, along with a self-titled country album. 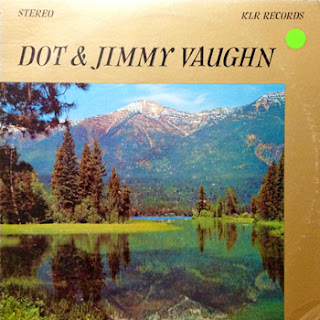 (a BIG thanks to B. Cook, of the most excellent Lone Star Stomp blog,
for finding this album and sending to me)

“The label was named for the initials of our children, Kim, Lee and Rick,” Dorthy said.

While Vaughn and Dorthy enjoyed singing country music, their heart was in performing sacred songs. As members of the Church Of Jesus Christ Of Latter-Day Saints, they often performed for church functions. Then one day they received a letter.

“We were asked to come into the tabernacle in Salt Lake City,” said Dorthy. “They asked us to record a song there.” By the end of the two-night session, Dorthy and Vaughn had recorded 13 songs.

With the blessing of the church, they brought the tapes back to Norman Petty, who sent them to the Dot record label – the same label that made national stars of Jimmy Gilmer and Fireballs.

The Sowards were immediately signed. 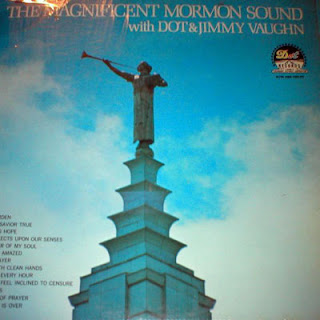 The Magnificent Mormon Sound was released in 1967.

“We received some wonderful compliments about that record,” said Dorthy. “Gene Autry was playing our record on his station in Arizona, and sent us a letter telling us that had more requests for our songs than any other record they played.” 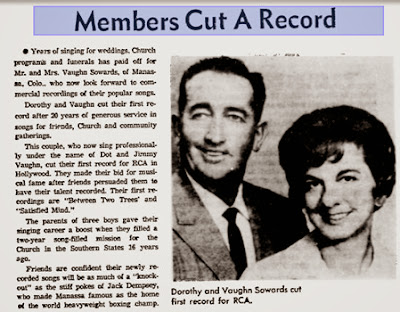 The couple stopped performing professionally in 1980, when Vaughn Sowards suffered a heart attack. They continued to sing in their church choir.

“I look back on my life and it was great life,” said Dorthy. “Those were really exciting and fun times.”
Posted by Lisa Wheeler at 12:38 PM