“I was going to school at Centennial High, and didn’t graduate – so I had to go to work. When you are 18, and living in Pueblo, you’re supposed to go work at the mill –so I did.”

He would last seven days.

Robbe's heart was in music. His group, the Bandmasters had a regular gig at the Columbine Club. One day, while out on a date, a dare would change his career path forever.

“Me and my girlfriend were in Beulah at this jamboree where Buddy Johnson and the Colorado Rangers were playing,” he said. "So she gets up and goes over the band and says something, and they invited me up on stage to sing. Boy did that tick me off.”

Robbe liked to yodel, so he sang the one song he knew he could attempt on such short notice – Slim Whitman’s “Cattle Call.”

“It was actually the only song the band knew, that I knew,” he admitted.

While the relationship with the girlfriend was short-lived, his love of performing was lasting. Before too long Robbe was venturing out, taking gigs across the country, with his new group, the Colorado Sun Downers.

“I was working with a steel guitar player, Joe Smith. He was my mentor back then,” he said. “We went on to work together for years." Throughout the early years of his career Robbe started to write his own songs. 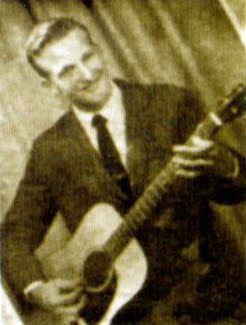 “Back then if you wanted to make a record, you had to write your own songs. Being in Pueblo, Colorado, nobody is going to bring you any.” So he headed to the studio to record his first two singles – the rockbilly-tinged “My Chicken Pen “/ “My Heart Disagrees” (Mystic 730), and “Single Man” / “If I Had My Dreams to Build Over” (Mystic 811). 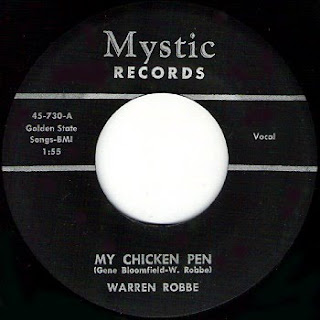 “We recorded that a KPIK studios in Colorado Springs – I think disc jockey Little Herb the Hookin’ Bull was involved - what a disaster,” he admitted. “I didn’t know anything about recording. It’s a terrible record, not professional, at all. I sent the record to Starday. You give them some money and they send you a box of records.”

His songwriting credentials were further highlighted when, in 1960, he pitched his song “Roll River Roll” to Slim Whitman. 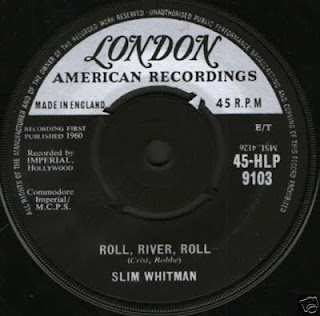 “He was in Pueblo performing, and I met him. He liked the record, so I gave it to him.”

In 1960 Robbe entered the military, where he stayed for two years. He picked up where he left off after he was discharged, moving to New Mexico, and forming the group Warren Robbe and the Bandits. Through Robbe’s relationship with Joe Smith, he was introduced to Colorado picker, Bill Goodwin.

“We were playing the South Cañon Hall, where everybody got together, and it was actually Bill who hooked me up with Band Box."

Years earlier Bill Goodwin had also spent time at the Denver studio, recording a handful of songs. After what Robbe perceived as a less than professional recording session at KPIK, Goodwin offered up his own band, The Country Tunesmen for the Band Box recordings. The sessions resulted in Goodwin-Robbe penned “I’ve Had My Chance”/”Life’s Not Worth Living” (Band Box 303). 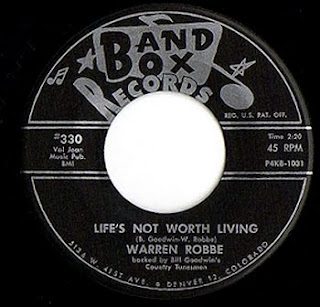 Listen to "Life's Not Worth Living"

Robbe spent several years on the road, as the opening act for his friend, Bill Goodwin. He would later move to Tennessee, where his prolific songwriting talents were in demand. He became a staff writer for Acuff-Rose music publishing. “I think I wrote 27 Ray Price records,” he said.

Robbe’s compositions would garner several awards, including a top five hit, in 1985, for Gene Watson, “Memories to Burn.” He would go on to score other Gene Watson hits, “Forever Again,” and “You’re Just Another Beer Drinking Song.” Although he doesn’t recollect the exact number, Robbe’s best guess is that he penned at least 200 songs in his career.

At 74, he’s retired in Tennessee, where he enjoys gunsmithing. He still has family in Pueblo.