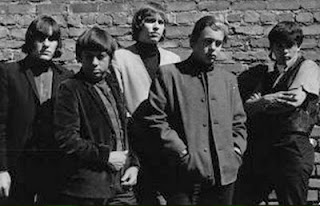 Monty Baker’s contribution to the Southern Colorado music scene is legendary. As a member of the Trolls, The New World Blues Dictionary, and Jade, it’s often assumed that he was a native of the region.

The fact is, he’s a product of the Hawkeye State.

“I went to high school in Iowa, and went to college in Minnesota – that’s where I got together with the band I was in, The Radiants,” he said.

The Radiants were made up of Richard Northrop (formerly of The Night Crawlers) on drums, Doug Rymerson on lead guitar, Ryan Carter on rhythm guitar, and Monty Baker on bass. Monty, Doug, and Richard were attending Mankato State College at the time, while Ryan was attending the Glamour Beauty Academy in Minneapolis. 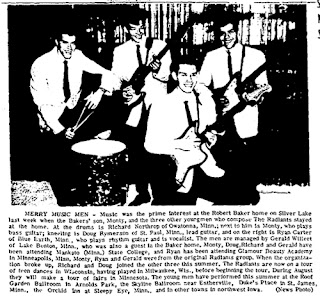 Monty Baker and the other members of The Radiants and their manager are guests the remainder of the week at the home of his parents, Mr. and Mrs. Bob Baker. The Radiants played during a three-hour broadcast over KSUM radio in Fairmont, Minn., Monday evening. The group played during intermissions at the Roy Orbison show at the Roof Garden in Arnolds Park Tuesday evening. The musical group will perform at the teen dance at the Skyline Ballroom near Estherville Sunday night. The men are now living in Owatonna, Minn.

Monty Baker visited Sunday with his parents Sheriff and Mrs. Bob Baker. Monty, a member of The Radiants band had a just completed a five-week engagement in Cedar Rapids, and was en route to Ispedmina, Michigan, for an engagement at The Roosevelt Hotel. The Radiants will return to Iowa City to appear at The Hawk, April 22, 23 and 24.

The Radiants, who were all under 21, worked around their age limitations at 6-percent clubs-- thanks in part to fake IDs.

“I was Denny Blake, and I guess I had that fake ID until I turned 21. When I turned 21 and got a license under my real name, Monty Baker, and they wouldn’t accept it,” he said. "So I used my fake ID to get some real beer."

While touring the United States, The Radiants ended up playing a gig in Pueblo, and got to know The Trolls.

“After the gig, we went back home…and then Uncle Sam and the draft broke up The Radiants,” he said.

“So Doug Rymerson and I called up Phil Head of The Trolls and asked him if he wanted a lead guitar and bass player. So we went to Pueblo. I guess this was 1965.” 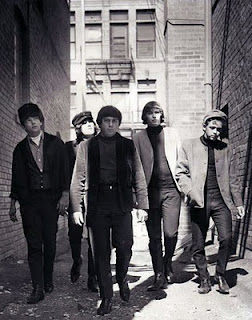 “We all were known by our nicknames. Lead vocalist and guitarist Richard Gonzales was ‘Speedy,’ keyboardist Fred Brescher was ‘Brush,' and drummer Phil Head was ‘Flip.’ I was ‘Denny,’ and lead guitarist Doug Rymerson was ‘Digger’."

The band portrayed themselves as having a harder edge than most local bands, at the time - playing covers of Kinks and Stones songs.

“We had members of our fan club in California get us their newly-released records, before anybody ever heard of these songs in Pueblo.”

The Trolls were regulars at The Columbine, and Jerry's, where they were the house band.

“We were working all of the time, doing weekends and special gigs. We were working five hours a night, most nights. We’d make $400-$500 in one weekend.”

Baker says several of their live shows were taped.

"I think I have eight reels somewhere, with about ten shows on them.”

In the early stages of the reformed Trolls, Baker took the lead as the group’s manager.

“We never signed a contract. When we said we would do a job, we did. We gave our word, and we were there. I remember a particular gig we were playing at East High School. They wanted a contract and with much prodding from the members, I signed it, because it was good money. Our normal thing was play 50 minutes, with a 10-minute break. So we played the 50 minutes and took our break, and this teacher comes up and she’s irate as hell because she said we had to play four hours without a break—it was in the contract. She got the principal and I explained that if he screwed with me, and the band, I was going to tell the kids why we were packing up and leaving, and he would have a riot on his hands. The principal tore up the contract, and we got our check, before the next set.”

Then Southern Colorado promoter Tony Spicola stepped in, and took the band under his wing as its manager.

“I remember we won a recording session in a Battle of the Bands contest, that was held at a Pueblo movie theatre. I think there were about 15 or 20 bands competing. We kind of rigged it. We had a bunch of our fans in the audience, and they started screaming like were the Beatles, or something. So when it came to vote, we won.”

“We ended up meeting this guy named Ray Ruff, who had a studio in Amarillo. We went down there to record our first single. I thought Iowa was flat. I remember getting into an argument with Digger about whether or not the road was sloping, or not, on the drive down. To prove the point, we peed in the middle of the road. It didn't move."

The band’s first single included two Fred Brescher compositions "That's The Way My Love Is" / "Into My Arms.” 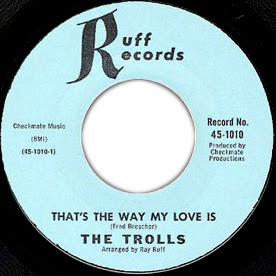 Listen to "That's The Way My Love Is"

“I think we recorded, oh what, maybe a dozen more songs, but they are all lost – from the fire.”

In 1968 the Ruff studios burned to the ground. Countless masters, from numerous recordings, were lost.

“The Ruff sessions were different, as compared to the first time Digger and I were in the studio with the Radiants. We made a record for the SOMA label – in fact, we were in the studio the same time The Trashmen were recording “Surfin’ Bird” (In December, 1964 The Radiants released "Special Girl" / "Ain't Got No Home"). The Ruff recordings were difficult because the Trolls played “on” each other live—we played as a band. We kind of fed off each other and Ray Ruff had us recording each of our parts separately. So the drummer did his thing, the guitarist did his thing, I did my thing – it was actually pretty traumatic.”

A few months after the Ruff sessions, the band traveled to Clovis, New Mexico, to record at the Norman Petty Studios.

"I think this would have been 1965 or early 1966. I really don't remember much about that recording session."

The studio time resulted in one single, the Speedy Gonzales-penned "I Don't Recall," and a cover of the Mick Jagger/Keith Richards composition, "Stupid Girl." 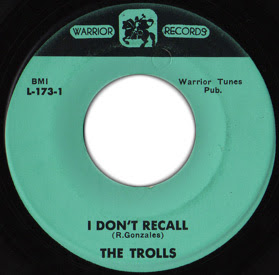 Listen to "I Don't Recall"

The single was released on Chan Romero's start-up label, Warrior. The band posed for the picture sleeve photo in a Pueblo park - minus one member. 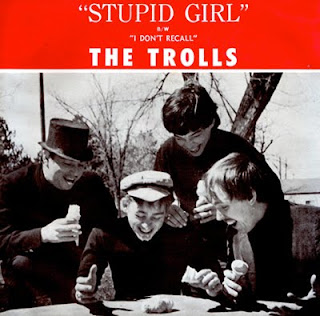 “Freddie wasn’t in the picture. Two nights before we took that shot, he touched his amp with one hand, while he played the organ with the other, resulting in a violent jerk of his arms, collapsing his lungs, and he ended up in the hospital."

"Our manager, Tony Spicola took that picture. He wanted us eating ice cream. When he took the shot, Phil’s ice cream came out of his cone.”

Baker estimates only 500 copies were pressed.

The flip side of the jacket features art from Baker's then-wife, Leryln (she signed "LKB" on the far right sleeve). 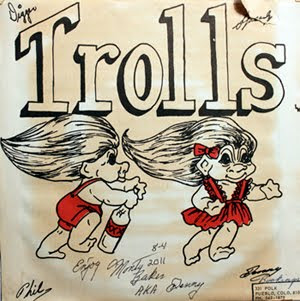 “We made it and they played it on the local radio station in Pueblo, and if we had a prom or a show out of town, we would take some to the local station where we were playing – of course we had to put some money under the table so they would play it.”

The band split up in 1966, shortly after the release of the record. Baker didn't want to elaborate on the reason why.

“Things just fell apart, and we just went our own way. I joined up with The New World Blues Dictionary.”

The Colorado Springs-based NWBD originated as The Persuaders, in 1964. The band was made up of Dave Julian on guitar, Lynn Larson on bass, Bob Crowder on keyboards, Jim Boitos on saxophone and Denny Townsend on drums.

After going through a number of name changes (including Filthy Five, and Goguenard) they settled on their new name, and a new lineup, with Baker replacing Larson on bass. Cabell Shepard replaced Bob Crowder.

“We played primarily psych rock, and was booked quite a bit at the Honeybucket in town.”

In July 1967 the band opened for Jefferson Airplane at The Broadmoor Hotel.

“I can tell you quite a bit about that show. The Airplane’s crew drove over the mountains, and lost one of their trailers with the light show in it. We were the opening act, and the local union was running lights for us. It was nothing fancy, just your standard lights with different colors."

"So Grace Slick comes out and berated the light guys, and embarrassed everyone with her tirade. Our manager went up to the light guys and got them to mix the lights, and when we came out of the second break, we had these great colors. When Airplane came out, they just had this one white light on Grace, and she was pissed."

"The local newspaper came out to cover the show, and said that we blew Airplane off the stage.”

It wouldn’t be the only time the band would share the stage with future hall of famers, opening for Eric Clapton and Cream, and Chuck Berry.

“We were asked to join Chuck Berry on a five day tour. So we get there at 1:00, expecting to practice with him. He shows up five minutes before the show, and I go ballistic. When I got done, he looked at me and said, 'Do you know how to play that thing?' I answered 'You bet your ass.' So he said, 'Let's go impress these people.' The guy is a total pro. We get up on stage to join him and we’re trading licks back and forth like we had been playing together for 20 years. He offered to pay us $2,000 a week to come on his one month tour of Germany, and he would pay all expenses. Jim and Dave refused to go because they were college guys."

"The night we did the show with Clapton we got done playing and Dave and Jim came up and said, ‘We’re done,’ so we broke up that night."

NWBD disbanded in 1968. Baker would go on to join the Pueblo band Jade, with Cabell Shepard, Marty Spritzer (who had been in The Chandells), and Murray Watson on drums.

“I think at one time we actually had two drummers in the band.”

Jade lasted about two years, resulting in one single “That Was Yesterday” / “I’m Leaving You.”

“The band wanted to get me replaced, so they kept playing with other bass players, but what they didn’t know was that I owned 90% of the equipment. By that time my marriage was going south, and we went our separate ways, and I went on a vacation by myself. I decided to go back to Iowa and get a real job, using my other occupation, as a respiratory therapist. So I said the hell with it, and became a respiratory therapist."

Baker is now semi-retired from the health care industry, and continues to live in Iowa.

COMING NEXT POST: 'Tis the Season for SoCo Gospel
Posted by Lisa Wheeler at 2:08 PM