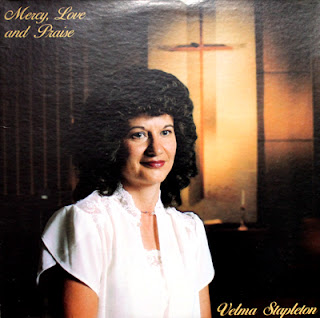 Side One:
Here We Are
Love Grew Where the Blood Fell
Mercy Rewrote My Life
It Made News in Heaven
A Vessel of Honor For God

Side Two:
There is a River
He's Ever Interceding
I Have to Worry
Spirit Song
I Love Him Too Much

Velma Stapleton loved country music. In fact, her dream had always been to be a country performer, and record an album. She would eventually record an album – but it wasn’t country.

“Back in my day it was all I wanted to do – sing country,” she said. “But I realized the words were not positive, so I discovered gospel music.”

Velma’s move from secular to spiritual music wasn’t an overnight switch. She had already been singing Christian songs at an early age, growing up in Lamar (she graduated Lamar High School in 1971). When she married, her family, which included her boys Michael and Steven, would take to the road to perform in Ohio, West Virginia, and Kentucky.

“Wherever I could perform, I did. My husband ran the sound.”

In 1983, at the urging of her pastor, she recorded her one and only album.

“My pastor foot the bill for me to record,” she said. “I recorded it in Denver. I think it took about two hours to make.”

She said her back-up musicians were actually pre-recorded songs, of which she simply sang to in the studio. “I think we pressed 500 copies of the record.”

Standard issue gospel here, but Velma gets to use her country chops on at least one song, "It Made News in Heaven."

The picture on the front cover of what was to be titled Mercy, Love and Praise, was taken at her church.

"The picture on the back was done in a studio,” she said.

Velma gave up singing to care for her husband, who has been ill for the past 12 years. She currently resides in Pueblo. “It was always on my bucket list to record an album,” she said. “And I did.”