Another sift through my Colorado 45 collection reveals an inordinate number of singles (on several different labels) from Randy King.

As always, if you have anything to add, contact me through the comments section.

To track down information on Randy King, you have to first start off in Texas, at least in the early stages of his recording career.  His sound most definitely bordered on rockabilly back in those days, on the San Antonio TNT label (with the Westernaires): 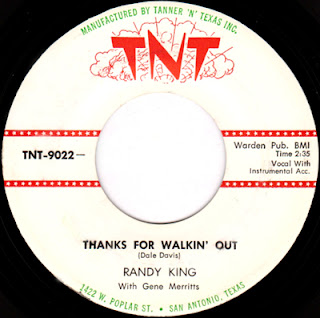 In 1961, Randy (and Gene Merritts) released the Bozo Darnell penned "It's Me Again" and the flip "The Last Show" on the Darnell Jaybo label (2485). Interesting note, while the label clearly shows "Denver Colorado," Billboard lists it located at "1004 Eleventh Place, Big Spring, TX").

According to Brandan Cook, who runs the outstanding Odessa, TX-based Lone Star Stomp blog, there is another label variation of "It's Me Again" (with a Nashville address on the Jaybo label), Bozo Darnell's second wife offered him some explanation:

On the record label - this was a partnership between Bozo and a guy by the name of James something -that lived in your area (Odessa). They took the Ja put in a "y" and then Bo (yes for Bozo). "End of the Hunt" (a Bozo Darnell release) was cut in Denver and Bozo was  playing Wyoming so they used Jeffery City as a return address for anyone wanting  to order records.  Later on Bozo and James dissolved the label, as if I recall what Bozo said that, James was no longer interested and it was not a profitable thing.

So when we married the label became J-Bo (kept the same color of label) and since Bozo had been on Jaybo it sounded the same on the radio.  The J is for my first name which is Jo. 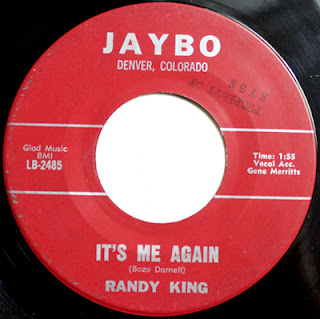 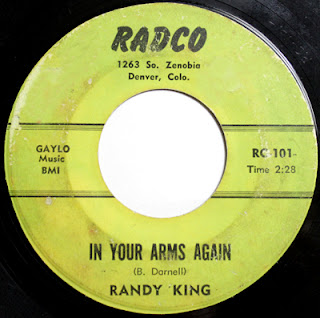 Randy kept ties with his West Texas and Big Spring friends with the 1962 release, "Fool The World," again written by Bozo Darnell (the flip was was the re-release of "Hearts Entwined" - Enterprise 104). Both the Enterprise and the Radco releases also note Gaylo Music - Gaylo was a Big Spring label/publishing company owned by Ben Hall (In 1959, "Hearts Entwined" was released by Bozo Darnell on the same Jaybo [J-Bo] label which released King's "The Last Show"). 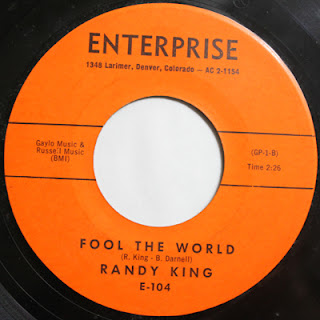 In 1963 King would then move on to the prolific Band Box label, releasing five singles over the next few years (while also apparently managing the Sultan's Table nightclub in Denver):

Included in his Band Box discography is a two-sided John F. Kennedy memorial disc -  the spoken word “A Day of Infamy” and the folksy “In The Summer of His Years” (Band Box 348).  The label indicates that the song was written for a BBC tribute. 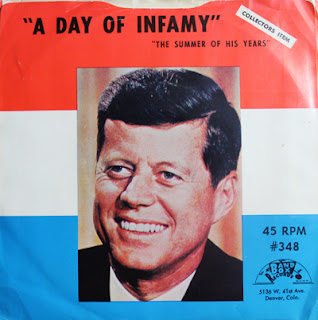 King's affinity for jumping to new labels continued, as noted in a 1965 Billboard, which indicated that he had moved on to Cheyenne Records, and released "Gitar Picker's Lament" / "That's Tarzan" (4466).

However, he must of kept his ties with Band Box, because a Feb. 11, 1967 Billboard ad (below) touted him as a “Promising new addition to the growing Band Box family of fine country artists. 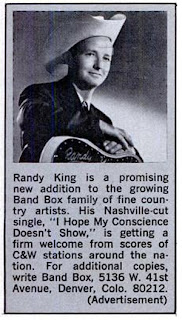 Sometime in the 1970s, King started his own label, Rival.  He released (at least) five singles and an LP of his own, along with a couple from Stan Pulliam: 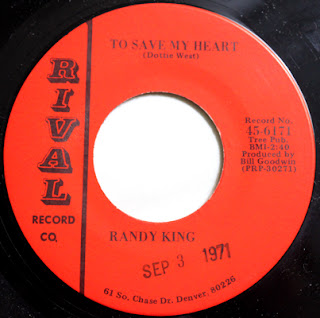 That's it. That's all I have on Randy King.
Posted by Lisa Wheeler at 5:08 PM