Sometime in the early 1970s, Emmett Byars had his fill of playing honky tonks in Texas, in the band Mike Hearn and the Wild Bunch.

"Neal Ford [of the Fanatics] was our road manager, and it was around the time John Denver was singing about Colorado, so I quit the band and moved my family up to Summit County."

Basing himself out of Frisco, Byars soon met up with steel guitar player Ray Sheffield, and gigged with The Rhythm Ramblers.

With several original songs to his credit, Byars decided it was time to record his own music. Enlisting the help of Sheffield, and fellow picker Dick Meese, he released his one and only single. 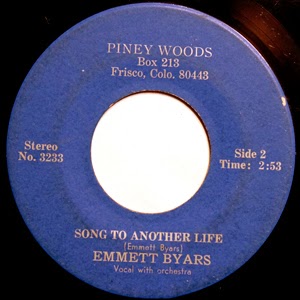 Listen to a sample
Posted by Lisa Wheeler at 5:38 PM

Email ThisBlogThis!Share to TwitterShare to FacebookShare to Pinterest
Labels: Frisco