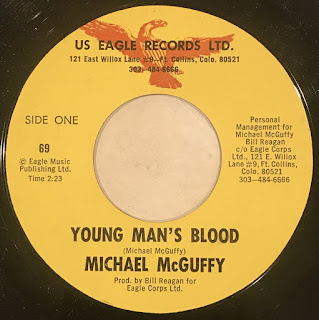 Hey all! Whenever I run into a roadblock with a record, I'm going to add a "missing in action" post to the blog, and open it up to anyone who might have information. I don't pretend to know everything, so I will look to you, dear reader, to fill in the holes, when I need help.

I don't recollect when or where I acquired this single. It was this year, and I'm thinking it was in Pueblo, but when you get to be a certain age, the particulars tend to get blurry...but I digress.

Here's what I know, so far:

Michael McGuffy (I've also seen it spelled "McGuffey") was based out of Fort Collins.  According to what I learned (off the Internet) he used to teach guitar at a music studio in the Musical Arts Conservatory, there.  In 1969 (possibly 1970), he recorded this one single,  before he teamed up with Bobby St. John to form the group Utah and St. John. This was confirmed in a 1975 blurb in the Greeley Daily Tribune. I've also seen a reference to him, in the group Cunningham Corner (thank you, invaluable Lost Fort Collins)

As for the record? You know when you think a single is going to sound a certain way, just based on the title, or label art, and must admit you were completely wrong? Yeah, I had that moment. I was thinking country twanger. Holy cats, yes, I own up to my inaccurate guess.

First off, "Young Man's Blood" might be one of my favorite Colorado finds, of the year.  Yup, I'm going to gush. The single starts off as a slow, singer/songwriter psych folk loner vibe about, I'm assuming, the wartime atmosphere of the period.

"The ground is covered with young man's blood. Where is God and what happened to love?"

Then, starting at the :48 mark...wait for it, wait for it.  He slowly builds up to a heavy-on-the-electric-guitar jam that I was absolutely not expecting. WOW.

The flip side doesn't disappoint, with the oh-so-breezy "In My Soul."

Thank you, Michael, wherever you are.