Back on Campus - Part Two

So, back in February, I posted a couple of LPs I found from my old alma mater, the University of Southern Colorado, oops, now Colorado State University-Pueblo. I had hoped to find additional vinyl recordings, as I had heard that there were more than just these, out in the wild.

Last month, while attending the Vintage Voltage Expo, in Denver, my dear friend and fellow vinyl hunter, Joel Scherzer, clued me in to a 45 he found at a dealer's booth - from that little ol' campus on the hill. 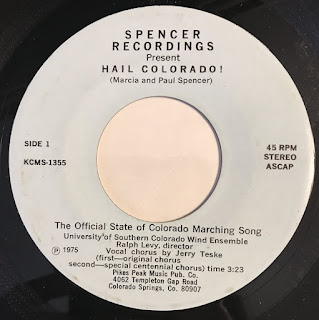 Listen to a sample of "Hail Colorado"

"Hail Colorado" (written by Marcia and Paul Spencer) was recorded in 1975 by the USC Wind Ensemble, with Ralph Levy back in the director's chair. Unlike the other USC recordings, this vinyl features the vocals of Jerry Teske. The b-side offers up the same composition, sans vocals.

Jerry Teske, was a private vocal coach, and regular entertainer at Figaro's Restaurant, who also served as the choral director for Palmer High School, in Colorado Springs. He passed away in 2017.  His obituary indicated that he also performed for the Grace Episcopal Taylor Choir, Colorado Springs Chorale, Abendmusik, Colorado Opera Festival, Opera Theatre of the Rockies, and the western group, The Trailriders.

In 1977, "Hail Colorado," went before the State Affairs Committee, to be considered the official state marching song. The measure was vetoed  by Lakewood Sen. Joe Schieffelin, who was quoted as saying: "After the bill passed the House, we received a couple of letters from people who said they had a better marching song and wanted us to hear theirs."
Posted by Lisa Wheeler at 6:16 PM