Hey all! While many know I collect and archive obscure Colorado vinyl, my other passion is radio station records. My first radio job was in 1980, reading the hourly weather and news headlines, and changing out reel-to-reel tapes at KYNR, in Pueblo, the local Muzak station. From midnight to six I made sure that the Steel City had continuous "elevator music" overnight. Don't ask me how I managed to stay awake, but for a 19-year old kid, it was magical.

So I'm going through my collection and spot this 1972 aircheck from KUAD in Windsor, Colorado. The audio comes via Programmer's Digest, the vinyl magazine for disc jockeys. The albums only lasted from 1972-1974 (33 releases), but it included a fantastic time capsule of radio. Each disc included a (edited) sample of a disc jockey's air shift. 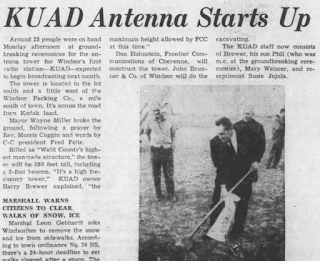 KUAD-AM signed on the air April 15, 1969. It served the Windsor-Greeley-Fort Collins-Loveland market. It has since changed hands and is now KJJD, playing Spanish-language music. In 1975, KUAD-FM went on the air. 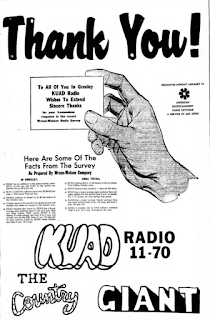 I'll have other archived Colorado radio audio samples to share, but let's give a listen to 1972 radio from Bob McBride, Phil Brewer, Brad Crandall, Frank Green, Jerry Hale, and others at KUAD, Windsor.