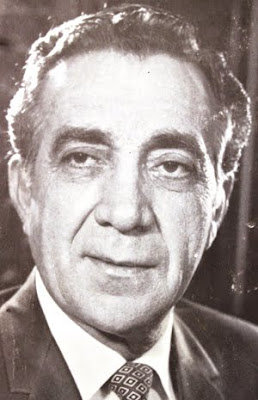 It didn't take Lou Amella too long to realize that he wasn't cut out for a blue collar job.

He worked at the Pueblo Army Depot a few years, but he kept going back to what he loved to do beyond the 40 hours a week grind - making music.

"I took saxophone lessons from Lou in 1944, I was six years old," said Pueblo polka king, Chuck Spurlock. "I did that for about two years, then switched to the accordion--found out I could make more money with it."

"He played the accordion very well, as well as the piano, guitar, and the violin," said Karen Amella, Lou's niece. "I remember when I took violin in school he used to help me with it and he also helped me with the clarinet. For as long as I can remember he was musically inclined."

Born in 1916, Lou was also an avid inventor - always looking for the latest unique creation that no home could do without.

"Uncle Louie made pizza sauce with a guy named Pete Powers at a warehouse down by the Vail Hotel. He also invented the Tricky Twirl, which was a small 15-inch round plastic loop on a chain with a handle that you twirled like a lasso."

Karen was enlisted to make an advertisement for the toy, which was sold locally.

"We also did a commercial for some stilts that he invented," she said. "He also invented some type of ravioli machine, but before he applied for a patent he got drunk and broke it with a sledge hammer. Then he used to make hand lotion in the basement of the house. He did a lot of odd jobs."

In the late 1960s, Lou headed to California, to try his hand at the music industry. While there he recorded several records, including the Cecil B. DeMille, Charlton Heston-inspired "The Lord's Message."

The b-side, "Broadway up in Heaven," revolves around a dream Amella had where famous deceased historical and entertainment (Glenn Miller, Will Rogers, Buddy Holly, Johnny Horton, Hank Williams, George Gershwin, and Al Jolson) figures come together for a single performance.

"I dreamt there was a Broadway up in heaven. A world premiere was lighted by the stars, and everyone who made their home in heaven drove up a star-lit path in golden cars..." 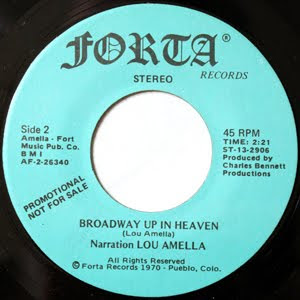 Listen to "Broadway up in Heaven"

Released in 1970, on his own Forta Records, Amella sold the disc throughout Pueblo. It's believed that during his stay in California, he pressed possibly one other single.

"I was a little girl then, but I think he released another record--I'm not sure what happened to that one," said Karen Amella. "There was also one he recorded with a female singer, I think her name was Maria." (NOTE: Possibly referring to Rosa Lopez)