How did Starr get together?

John Grove and Rob Pike bumped into each other at a local grocery store in the fall of 1972. John asked Rob if he’d like to get together with Bobby Montoya and Scott Thomas to jam. John and Scott had played together in a band called Joint Session in 1969. Rob had hung around with Joint Session. Rob eventually was in a band called J. P. Silverhorse that wound up in Florida. It was shortly after Rob moved back to Pueblo that he bumped into John at the store. Prior to the beginning of Starr, John was playing with the Pueblo band Tractor and Scott was playing in a band called Crushed Velvet with Ernie Watta (of The Teardrops) and Maxine Watta.

Did you all set out to be big rock stars, meet girls? What exactly?

We all wanted to be rock stars and conquer Pueblo Colorado U.S.A. Musical excellence was our pursuit. We were passionate about the music we played. We had very nice equipment for the times.

Where did you all rehearse?

Scott’s grandma Verlengia’s basement, and the old Arcadia Ball Room which was being leased by an artist named Franco Piras, which later became the Hi Club. After that we had a ten year plus run at the Pueblo Union Depot.

When you first started out did you do your own songs, or covers?

What was Starr's first paid gig?

It was a bar in Monument, Colorado which none of us can remember the name of. We do remember that they pushed two pool tables together for a drum riser.

Where were some of the clubs you used to play? 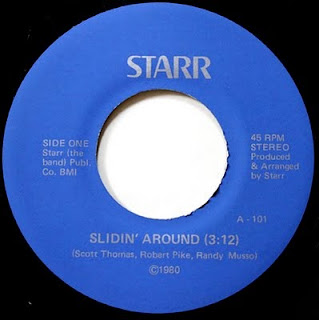 Listen to "Slidin' Around"

One of those do it yourself session that failed.

After the session, Bobby Montoya and John Grove left the group. Randy Musso was brought in on bass. The following year Starr recorded a full length LP of original songs. The LP showcased the band's harder prog edge, with complex production and arrangements with the help of producer Tom Gregor.

The second session was done at Start Song studio in Colorado Springs. We planned on doing the LP while working on the single. Rob and Scott had done the majority of the writing during a period when it was just the two of them. When we had done the 45 session the owner of Start Song, Tom Gregor, offered a package to do the LP. He had told us he would give us unlimited time for a set fee of $500 plus tape costs. Not having the clock to worry about made for a very relaxed and enjoyable session. We spent one whole day just setting drums mics. Tom was set on getting the drums right. We actually learned and recorded one of Tom’s songs ("Now I Know") during the session.

Why wasn't "Slidin' Around" included on the LP?

We didn’t feel "Slidin’ Around" was quite there in terms of going on the album. "Hold Me" was recorded again for the album. 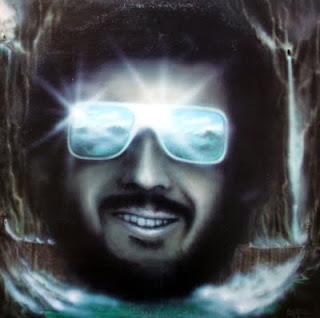 Listen to "The Schooner"

Tell me the story of the album cover art.

The picture on the album cover is an air brushing of our friend and road crew member Dale Girodo. Dale had been killed in a freak automobile accident. The title of the album was “Memories Never Die." The air brushing was done by another friend of ours Biff Yates.

How was your album distributed?

It was available at most of the local record stores. We had also started our own publishing company-Starr the Band Publishing Co. We had apparently received a fair amount air play in one of the Scandanavian countries as Rob had received a royalty check from B.M.I.

Did you get any local airplay on the radio?

KKFM in Colorado Springs and KDZA in Pueblo. At that time KDZA had a feature called "Pick of the Week" in which listeners called in and voted on one of two songs. An interesting note is the "Hold Me" beat out .38 Special’s "Hold On Loosely" for pick of the week. Pictured on back of LP:
Randy Musso, Scott Thomas, and Rob Pike


So what happened - were you all ever offered a chance to make it big?

Starr, as such, never had been offered any opportunities to make it big. When we were doing the club circuits we realized that wanting to have families and homes may not mesh too well with life on the road.

Was there ever talk of leaving Pueblo and trying your luck on the West Coast?

There was talk of leaving Pueblo for L.A., but it was just talk.

Why did the band break-up?

Disco was actually to blame for the original demise of Starr. We were hard core rock guys and weren’t about to start playing disco.

For more on the history of the band, visit the group's website.

In 2008 the band released the CD Listen Up. In addition to original members John Grove, Scott Thomas, and Rob Pike, the band was joined by Mike Hough (guitar, vocals) and Brad Rice (keyboards, Hammond B3, vocals).