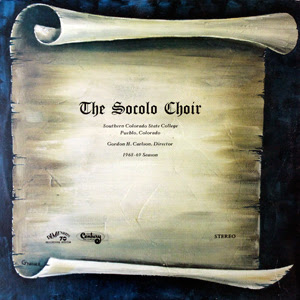 Side One:
Built on the Rock
Wondrous Love
Praise to the Lord
O Lord God
My God How Wonderful Thou Art

Side Two:
Inscriptions From the Catacombs
Singe We Merrily Unto God Our Stream
They That Wait Upon The Lord
Ev'ry Time I Feel the Spirit

The Socolo Choir was a 60-member touring group, based out of the then Southern Colorado State College, in Pueblo.

During the 1968 spring tour, the group performed at Red Rocks, for the annual Easter sunrise service, "where thousands listened."  It was also the same year the group recorded its first, and only album (Century 33921), recorded at St. John's Cathedral, Denver.

Typical heavy choral, religious-themed, offerings here. However on the "negro spiritual" number, "Ev'ry Time I Feel the Spirit," there is a stand-out, uncredited vocalist. 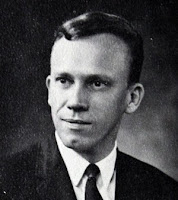 Gordon H. Carlson is listed as the group's director.

I received a nice e-mail from Larry Moore, who appears on the First Commandment LP, and was once a member of the Socolo Choir, from 1967-1968.

"A lot of the members of that choir have been involved in Pueblo's music for years.  Several of them became music teachers in the Pueblo schools.  Dr. Gordon Carlson passed away in Denver last year," he said.