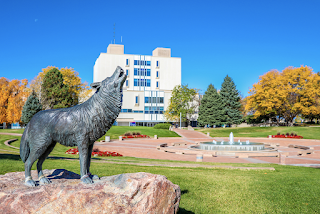 Earlier this month, I found myself back on the campus of my alma mater. It was one of those surreal moments, which brought back a flood of memories (which seem to get fuzzier as one ages). Being the record collector that I am, it also got me wondering if my old school put out any vinyl recordings.

I had written about one, several years back, but the recent trip back on campus renewed my interest in this project.

It was during the Southern Colorado State College years (1963-1975), which resulted in a couple (that I know of) vinyl recordings. These were formal affairs, my guess to appeal to middle-aged donors, or to put the minds of moms and dads at ease, that their children were really being studious. 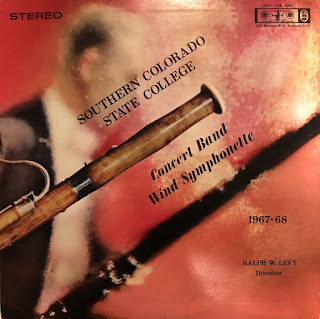 Under the direction of Ralph Levy, the 1967-68 performance of the college concert band consisted of works by Haydn, Tschaikowsky, Holst, Nelhýbel, and Roncal. 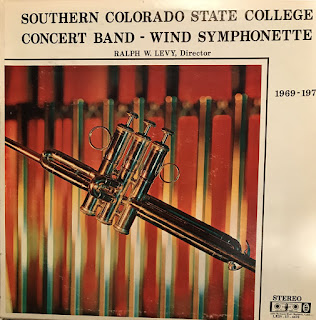 The following year, the group performed selections by Bach, Wagner, Kabelebsky, Norman Dello Joio, and William Francis McBeth. With respect to the student musicians on these albums, one has to wonder if, given the era of which they were recorded, they were hoping to let loose on "In-A-Gadda-Da-Vida." My mind tends to digress on these matters.

Of course, if anyone finds any other LPs from my old school, I would love to post them.

Ralph Levy passed away in 2007, and is buried in Walsenburg. His obituary shared that his motto in life was "Love music, practice diligently."
Posted by Lisa Wheeler at 2:58 PM