Hey all! Taking a quick break from packing for the big move, up the Interstate...

So, I'm using some stockpiled newspapers, to wrap items, when I spot a loose page from an Aug. 15, 1964 Cash Box. I have no clue why this was sandwiched in between a 2015 front page of the Pueblo Chieftain, and a 2016 Sunday insert from the Colorado Springs Gazette, but this tiny ad immediately caught my eye. 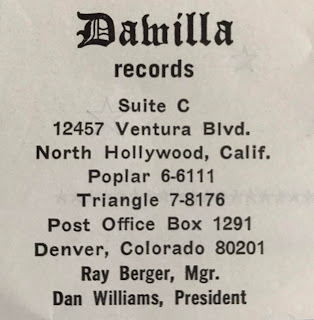 I was familiar with Dawilla Records, as I once had a copy of the Danny Williams single, "My Little Black Book" / "Stranger To Love" (Dawilla 101). However that single had no mention of Denver (kicking myself now, that I long-ago sold this, without knowing the Colorado connection). 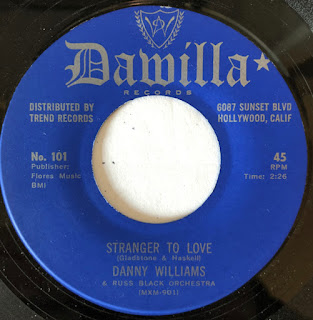 Side note: In 1962, Danny Williams appeared on the Pilot record label, with the semi-milquetoast single, "Dreamer." The single lists Eddie Cochran as producer, however it is NOT the same "Summertime Blues" singer, who died two years earlier.

My curiosity about the above ad got the better of me, as I spent most of my moving break trying to track down the Denver connection. I found nothing, until I found this single: 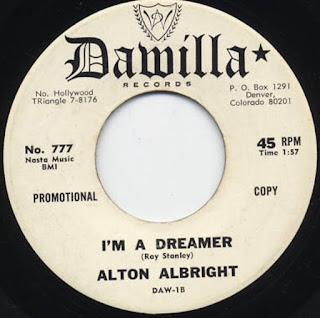 Bingo! Note the Denver address listed, on the upper right side, which corresponds with the address on the advertisement, and the one I also found, below. 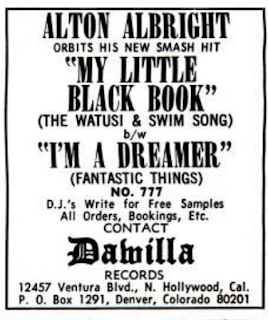 The trail goes cold, after 1964. A few websites indicated that Danny Williams and Alton Albright were one in the same. Who knows.

OK, done with my little break. Back to packing...
Posted by Lisa Wheeler at 6:34 PM