Hey all! Taking a much-needed break from packing, to attend a Castle Rock antique show, today. I really didn't expect to find anything, music-related, as I really just wanted a quiet respite from shoving more of my life in a moving box.

I immediately spot a vendor with sheet music, for a buck, and dove in. After sorting through about 100 pieces, and finding nothing from Colorado, I get to the very last piece - a 1934 composition, published in the little town of Rye, located about half an hour south of my hometown zip, Pueblo. 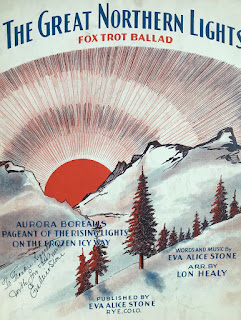 Eva Alice Stone was born in 1881, in Missouri. In 1916 she moved to Rye, after living in Canada. She then moved to Cañon City, in 1945, with her husband Fred, who died in 1965. She passed away in 1973, at the age of 91. Her obituary indicated that she had no children, and was "the last of her family." She is buried in Lakeside Cemetery, Cañon City.

The Great Northern Lights lists Lon Healy, as arranger. I was able to find another piece of music, with his name attached to it, Colorado Rose, featuring the Colorado College Glee Club. 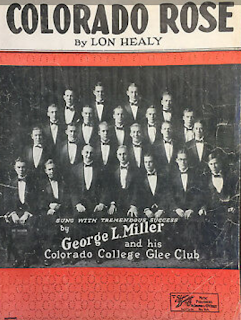 A quick Internet search on Lon includes several published letters to the Colorado Springs Gazette-Telegraph editor, on everything from communism, to censorship. I also found a 1930 ad, in Popular Mechanics, looking for work, as a music composer. His address was listed as the old Liberty Theatre, on Pikes Peak Avenue (the 450-seat Pike Theatre was renamed Liberty Theatre on February 12, 1918. It later seated 425 and was closed September 15, 1940). The ad listed his composition credits as Colorado Rose, and Arizona Rose. A 1945 issue of Popular Mechanics shows an ad, looking for work, as a "melody writer."

As for Eva Alice, I could find only two pieces of published music, from her - The Great Northern Lights and Beautiful Valley.