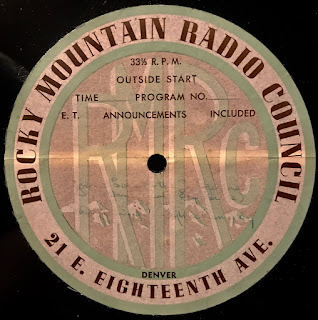 Upon putting it on the turntable, I heard a photography-related instructional program, performed with a Dragnet radio show narrative.


Check out a sample

No idea who the announcers / voice actors are, as there are no credits listed. There is very faint writing on the label, but I can't make it out. There is no etching on the runoff.

In 1937, University of Wyoming President A.G. Crane, proposed a radio project, similar to that of the University Broadcast Council of Chicago. He called it the Rocky Mountain Radio Council. It was one of the first set up by the National Committee on Education by Radio (NCER), funded by John D. Rockefeller.

According to an Internet search. "Crane envisioned a wider radius of broadcasting, proposing that a multi-state consortium, centered in Colorado and Wyoming, create a regional broadcasting initiative in which widely separated populations would have access to the same free education"

Within its first year, RMRC provided more than 200 education programs to radio stations, from 30 college and university partners.

The RMRC was housed at the Brinton Terrace row houses, located just off of 17th and Lincoln (21 E. 18th Avenue), behind Trinity Methodist Church. 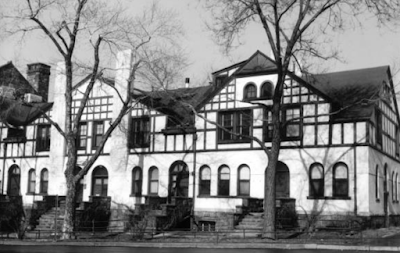 In 1949, A.G. Crane was elected governor of Wyoming. A year after his election, the RMRC folded (given this date, and the fact the Dragnet radio show ran from 1949-1957, we can probably assume this recording was made, shortly before the group disbanded, in 1950. However the Graflex 22 camera, mentioned in the narrative, was made from 1952-1956), but not before it joined up with Denver Public Schools, the Denver Public Library, and the University of Denver, to discuss the concept of educational television for the city. Through those efforts, in 1956, KRMA-TV became the state's first public television station. In 1970, KRMA became a member of the national Public Broadcasting Service (rebranding as Rocky Mountain PBS, in 1997).