You know, you always hope that each obscure Colorado record find has a happy story attached to it. For the most part they do, but then you find something that goes in the complete opposite direction of cheerful. 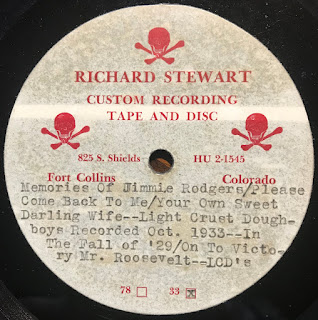 So, I've had this homemade two-sided, 10" compilation for years. I always loved the Fort Collins label, showing three skull and crossbones. The selections on the disc include Johnny Cash, Elvis, Bob Wills, Red Foley, and the Light Crust Doughboys. I thought it was time to investigate the Richard Stewart Custom Recording Tape and Disc label further.

I wasn't prepared for what I found.

Richard "Dick" Stewart was known around Fort Collins as a popular local organist, and senior at CSU. He married his sweetheart, Clarice, on March 24, 1957, and they immediately started a family.

On June 16, 1958, Dick Stewart was robbed of his wallet. The offender then burglarized the family home, and fled to Wyoming, where he was arrested for the crimes.  Just 11 days later, Dick Stewart died, at the age of 25. The cause of death was believed to be diabetes. His death was so shocking, at such a young age, it made the front page of the paper. 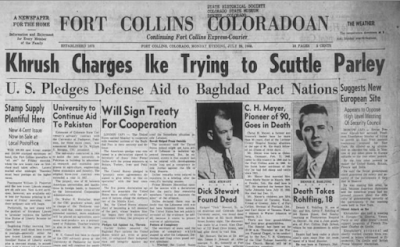 Dick Stewart Found Dead
Richard “Dick” Stewart, 25, local musician and Colorado State University senior was found dead in his home at 823 South Shields Street Sunday night. The discovery was made by a friend Alan Char-key, of 712 West Olive Street, who had gone there to 'visit him.  Mr Stewart, the son of Dr. and Mrs. James D. Stewart of Albuquerque NM,  formerly of Fort Collins, had long been afflicted with diabetes. The young man was born at Chicago, July 7, 1933, and came here with his parents in 1946. He had lived in the Shields Street home since Dr. and Mrs. Stewart moved to Albuquerque several months ago. He was church organist. Mr. Stewart had served as organist for several Fort Collins churches most recently for the First Christian Church where he played for the service Sunday morning. He was graduate of Fort Collins High School and was to have begun his senior year at CSU this fall.

I couldn't find any additional information on the Richard Stewart Custom Recording Tape and Disc label. It's quite possible this was simply a test pressing for homemade recording equipment. The address of the studio, 825 S. Shields, is now home to a travel agent, and a family planning center. 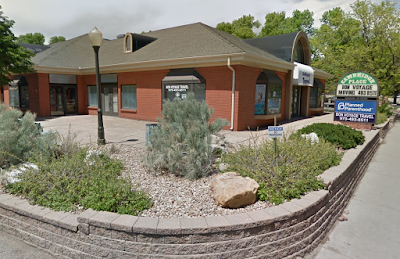