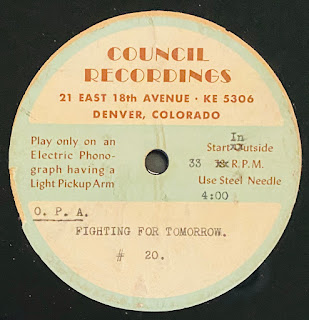 Spent yesterday in Colorado Springs, hitting a big estate sale warehouse business, over on the east side of the Interstate. Discovered a couple of Colorado finds, including this disc from Council Recordings, in Denver.

The 33rpm spoken word record was produced by the Office of Price Administration. Founded in 1941, the OPA was established within the Office for Emergency Management to control money and rents after the outbreak of World War II.

Apparently, as part of its public relations effort, the OPA interviewed wounded WWII soldiers, who were recovering at Denver's Fitzsimons General Hospital / Army Medical Center. I had never seen these records, and I could find nothing on this public relations campaign.

The interviews were conducted by Staff Sgt. Bill Walker, who served as the public relations officer, for the hospital. The heavily-scripted audio provided listeners with a first-person account of "what it's like to live overseas," as told by a WWII soldier.

Walker interviewed T/5 (technician fifth grade) Gene Dorman, of Indianapolis, IN.  According to the audio, Dorman with the 82nd Airborne Infantry. He was wounded during the invasion of Normandy, on July 27, 1944, at Saint-Lô.

The flipside of the disc includes an interview with Cpl. Manuel Marks, of Wichita KS. Sadly, that audio is too beat up to include.