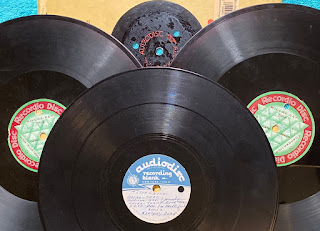 Yesterday I hit up the Pueblo ARC thrift store, in search of esoteric Colorado vinyl. My eyes immediately focused on four Audiodisc / Recordio records, with handwritten labels. For a buck a piece, I didn't think twice. I took the whole batch home.

As you know, it's always a mystery with these homemade recordings. When I put them on the turntable, I heard what sounded like a Sweet Adeline (female barbershop quartet) group. 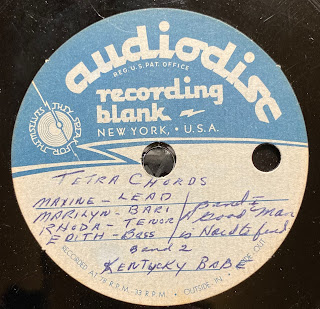 Listen to "A Good Man is Hard to Find"

The labels noted "Tetra Chords" and "Maxine - lead, Marilyn - Baritone, Rhoda - Tenor, Edith - Bass." The other homemade records only showed the names of the songs, along with "1950 Pueblo." All had the same vocal group, performing various heavy-on-the-harmony songs.

So I hit the Internet and quickly find that there was a group called the Tetra Chords, in the Sweet Adeline archives, but the dates are way off - that particular group won the the Queens of Harmony title, in 1978. Also those members names were not the same as those on the records I found (Tenor: Terry Mohn D'Amato, Lead: Patti Frei, Baritone: Sandi Spilker Wright, and Bass: Nancee Reinhold). They were also from Missouri.

EDIT: Shortly after I posted this story, my friend Jane Fraser located this picture: 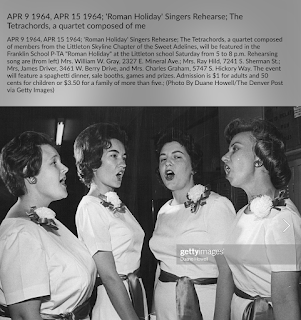 This Colorado Tetrachords group (1964) was out of Littleton, however it's quite possible one of the members ended up in Pueblo, at some time. Thank you for finding this, Jane!

So, dear readers, I look to you for any additional help in solving this mystery. Anyone know who Maxine, Marilyn, Rhoda, and Edith are?