The Top of the Park Presents Bill Farrell 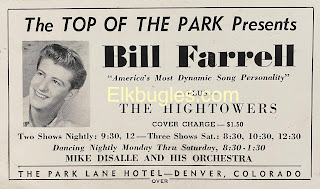 As you probably know, from past posts, I'm also a postcard collector. I always get excited when two of my hobbies meet - Colorado music and Colorado postcards.

So, I'm going through my collection, and I spot this card I obviously forgot about - singer Bill Farrell at the Top of the Park (at the Park Lane Hotel, 450 S. Marion). No year is noted.

In 1955, he released the rockabilly-tinged "Rock Love," (YouTube audio) a big departure from his early Bob Hope show standards.

Also noted on the card, Mike DiSalle and his Orchestra. Mike was a regular performer at the Top of the Park, and KOA radio. Plus the card notes the group, The Hightowers. I couldn't immediately find a reference to this group. Of course, if you can help solve the mystery, contact me. 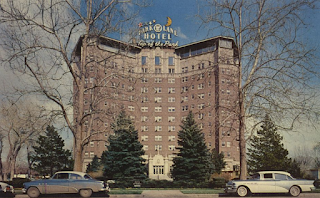 As for the Park Lane Hotel?

According to the Washington Park history website: "After B.F. Weinberg sold the Park Lane Hotel in 1955, the facility fell into receivership, and he bought it back at auction for $300,000. In 1962, Weinberg sold the property to investors who planned to build four apartment towers north and south of the Park Lane. The apartments in the building were rehabilitated floor by floor and the Top of the Park and the lobby were redesigned. Weinberg again acquired the hotel which was for sale due to unpaid taxes in 1965, and sold it to Denver developers H.W. Hewson and Douglas W. Bell. The building was scheduled for demolition, and the Denver Fire Department was allowed to set fires and train firefighters in the building in 1966, before Kerdy Wrecking Company tore the hotel down."

The block is now home to The Park Lane condos.
Posted by Lisa Wheeler at 1:01 PM