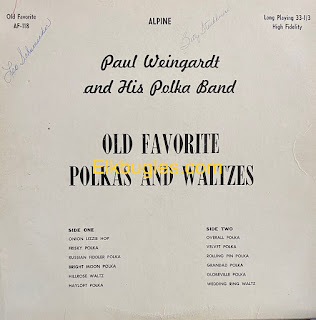 Hey all - So I threw on the mask and gloves, and took advantage of the big Colorado thrift chain opening back up, again. I was surprised to find so few people in the stores (at one stop, I was the only one in the building, besides the staff).

It was good to get back to record digging, again. Picked up a nice stack of 11 Colorado LPs - including a surprise -  a previously unknown album recording by Paul Weingardt.

Paul Weingardt (born 1915) was the leader of the Alpine Dutch Hop Boys. He revolutionized the genre by being one of the first groups to use an accordion as the main lead instrument (instead of violin). His band (which included, at various times, V.A. Hartman, Palmer Deines, Val Sewald, Hank Schneider, Warren Walters, Jake Walters and Alex / Leroy Weingardt) were immensely popular in the Rocky Mountains region. 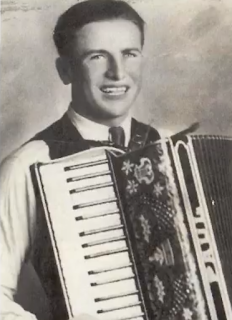 While Paul had recorded a few 78rpm records (on the Frontier label) and a few known 45, on both the Frontier and Alpine labels, there was never a mention of an actual Paul Weingardt LP - so this was a cool find.

Released on the Alpine Record label (AF 118) the album features polka standards. I couldn't help but notice that my album was "signed" (not authenticated) by another famous Colorado polka performer, Leo Schumacher. 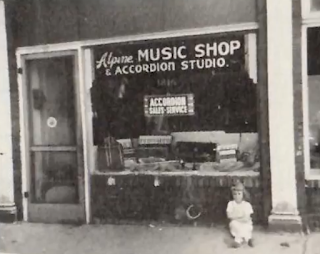 Paul Weingardt and his family lived behind the Alpine Music Shop (located at 1813 33rd Avenue), where he taught hundreds of children and adults how to play the accordion. On November 22, 1964, on his way to (or from) a concert, near Torrington, Wyoming, he and his wife Anna, along with his dulcimer player, Henry Schneider, and his wife Frieda, were all killed in a car crash. Weingardt's young son, Kenny, was the only survivor. He and his wife are buried at Mt. Olivet Cemetery, in Wheat Ridge. 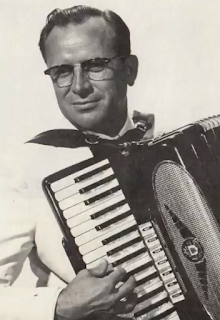 Four years after his death (1968), Band Box released A Tribute to Paul Weingardt, by the Alpine Polkadots (1017).

In 1976, Weingardt was one of the first two performers (along with Adolph Lesser) to be inducted into the Colorado Polka Hall of Fame.
Posted by Lisa Wheeler at 4:34 PM