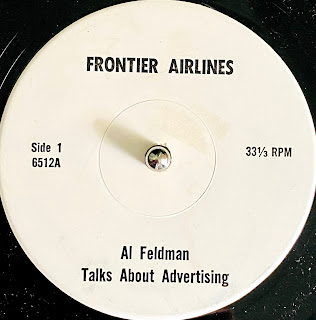 Found this promotional record for Denver-based Frontier Airlines, recently. It was a limited release, not meant for mass distribution, more than likely sent to airline employees.

The flip side is an instrumental version of the jingle. No year is noted. The other side notes it was produced by the ad firm of Tracy-Locke Inc., and Fred Arthur, a well-known Denver disc jockey (KGMC, KIMN and KTLN). There is no information on the jingle singers, but more than likely they were Western Cine Service performers (Arthur was the executive director of the firm).  He was inducted into the Broadcast Pioneers of Colorado Hall of Fame in 2005. He died July 31, 2020.

Voiced partially by (then) Frontier executive Al Feldman. In 1971 Feldman moved from an aerospace contractor job with Aerojet-General to president of Frontier Airlines, which had been struggling carrier.

As president, he transformed the airline into a highly profitable business through a combination of improving passenger amenities, restructuring, and employee motivation. In 1980, Feldman left Frontier to head Continental Airlines. He passed away in 1981, shortly after the death of his wife.