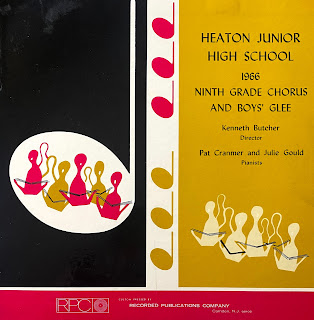 Back in my hometown of Pueblo, for this 1966 find from Heaton Junior High School. Go Hawks!

Finding this record was a surprise, as I thought I had pretty much amassed every record ever recorded there. I have deep roots in the Belmont area of Pueblo. I grew up about a mile from Heaton, graduated from East High, and attended the (then) University of Southern Colorado, "down the street." Mom still lives in the same "off Constitution" house. So yeah, if I'm a bit biased toward the Steel City, I'll own up to it.

This is the first record I have ever found from my neighborhood junior high school. As is typical of these school recordings, it's filled with standard choir-type "safe" songs ("Lady of Spain," "Three Coins in a Fountain," etc...). Given the year, I have expected to find some Beatles covers, but I was denied.

That said, the kids really get to belt it out on a well-known Kingston Trio standard.

The record was released on the prolific RPC / Recorded Publications Company label (Y-90891/2) The ninth grade chorus and boys' glee groups were directed by Kenneth Butcher. Pat Cranmer and Julie Gould are credited as the pianists. 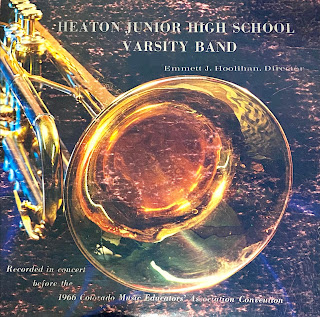 Heaton also released a full LP, that same year. The album was recorded live at the Colorado Music Educators' Association Convention. The music was conducted by Emmett J. Hoolihan, who had previously been a band instructor, in the Cripple Creek school district. I found a 1965 newspaper article that mentioned that he "had just moved to Pueblo."