NOTE: This piece is also published in the December 2021 issue of the Pueblo County Historical Society The Lore.

In the late 1860s, Michigan physician and surgeon, Dr. J.W.O Snyder came to the newly-established town of Pueblo with a hope of setting up his medical practice. But when he arrived in town, he discovered that only a handful of businesses lined the dirt roads, and stores for basic necessities were nonexistent.

Having just been appointed the city’s postmaster, he decided to open a book and stationery business. But his entrepreneurial spirit didn’t stop there. The store also carried toys, games, shoes…and musical instruments – violins, guitars, and banjos. 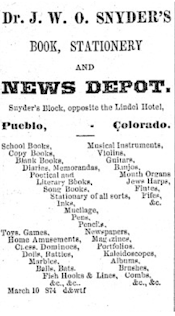 By the 1860s, Pueblo civic leaders were focused on establishing the new city’s infrastructure. While there had been Masonic balls, and occasional dances and concerts, entertainment was low priority. But by 1869, on the northside of Seventh Street, Conley Hall (later known as the Thespian Theater and Montgomery’s Opera House) was built. The Pueblo Cornet Band would be one of the first organized music groups, in the city.

Dr. Snyder’s music-related inventory also expanded, and he began carrying larger musical instruments, including pianos and organs. An 1874 ad in the Weekly Chieftain noted “If you want a fine piano or good organ, go to Snyder’s book and music store.”

In 1873, William W. Knight arrived in Denver, along with his brother Frank A. Knight. The two had left Michigan to find their fame and fortune in Colorado. The two teamed up with Asahel K. Clark to open a sewing machine business. In 1876, they added musical instruments to their offerings. Three years later Clark decided to leave the business, and sold his ownership to W.W. Waterbury. The store would go on to be renamed Knight Brothers and Waterbury. By 1879 their Lawrence Street music store was a huge success, and the owners began to think about expanding, to Pueblo. The following year they set up shop on Santa Fe Avenue. 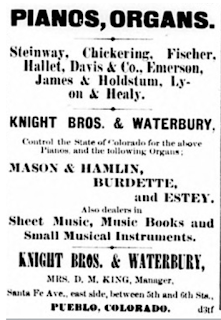 The store employed Mrs. D.M. King, as manager. In a May 1881 Chieftain story, it was implied that the new business, under her leadership, was trying to keep up with the demand for pianos. “Mrs. D.M. King, in charge of Knight Brothers & Waterbury’s Music Store in this city, has disposed of a piano every day this week so far, and informed us last evening that she anticipated negotiating another sale today. She deserves all the success with which she is meeting.”

Possibly following the lead of the Knight Brothers, Pueblo began seeing more and more non-music stores carrying music-related items. In 1880 J.R. Shaw, a Santa Fe Avenue sewing machine seller, expanded his offerings to include sheet music and instruments. In 1881, brothers F.A. and C.M. Wells purchased the Richardson Building, at the corner of Sixth Street and Santa Fe, and announced that they too would be opening a music store, known locally as “The Temple of Music.” Interestingly, the clothing store Roworth & Veatch, located at 81 Union Avenue, also carried sheet music, and was known as “The Temple of Fashion.” 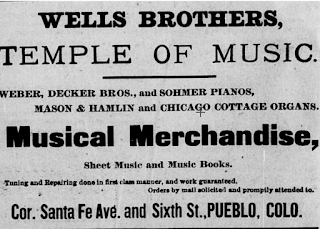 With three major music dealers on one street, the Chieftain took notice. A May 12, 1882 story announced that Santa Fe Avenue will “give people music day and night.”

In 1883, the Schreiber Rowcroft Quartette made their performing debut. The band was being booked for almost any engagement, which required musical entertainment, and they became instant local celebrities. 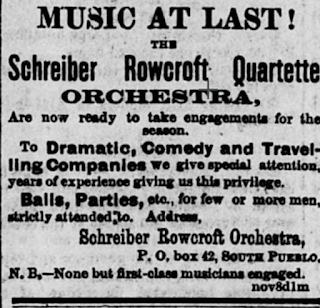 At some point the group became known simply as the Schreiber Orchestra. Possibly parlaying on their popularity, the family opened a music store, at Seventh and Main. 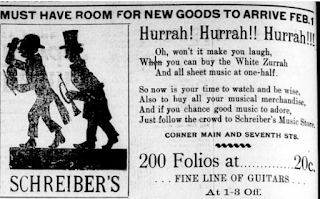 By 1885, the Knight Brothers and Waterbury store had changed ownership, to become Knight-McClure. They highlighted the addition of A.G. Haupt, a piano tuner “direct from Steinway & Sons, New York.”

Opening in 1888, in the basement of the Fifth Avenue Hotel, at Fifth and Santa Fe, Crews-Beggs Dry Goods promoted “thousands of pieces of sheet music” at its store.

By the late 1800s, possibly sensing a goldmine in a newly-established town, additional Denver music stores began expanding to Pueblo.

In 1882, at age 21, John Henrich moved to Denver, and worked as a clerk in E. F. Merriam's piano and organ store. Soon joined by his sister and brother-in-law, Lydia Henrich and Charles H. Walker, the trio soon opened the J. S. Henrich & Co. music store. Within five years, the store opened in Pueblo.

“He(i)nrich & Co have decided to open a music store in Pueblo, and have rented the east room in the Maple Block, on west Fourth Street.” – Colorado Daily Chieftain, 1887.

However, within the year, the Pueblo store closed. It’s inventory was acquired by W.W. Montelius and Co., a Denver music store, who had recently set up a Pueblo store front at 112 West Fourth Street (later Seventh and Main). As noted in the ad below, Charles Schreiber would later be affiliated with the Montelius Piano Company. 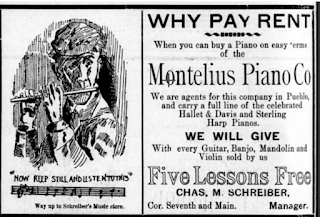 Around that same time, George C. Harper and his wife, Annie opened the Pueblo Music House (sometimes known as “Harper’s Music Store”). The shop was located at 307 N. Main, and offered pianos and organs “sold on easy payments.” It’s claim to fame was offering the Harper Guitar, an instrument designed by Mr. Harper, and sold exclusively at the store. 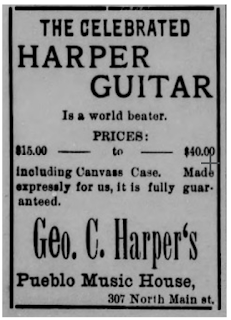 In 1898 the Pueblo Music House went out of business, and its contents were sold to N. E. Motherway and partners A.V. Bradford, and J.H. McCorkle.

On October 6, 1898 the Chieftain published an article of incorporation for Silver State Music. The owners were listed as Ohio transplant (and former Knight-McClure music store employee) L.M. Kieffer and jeweler Frank H. Frankenberg, Jr. While previous music stores had barely received a note in the local paper, the arrival of Silver State Music was announced with a lengthy story. “Music loving people of Pueblo and the public at large are assured that a long felt want is being supplied by the location of such a desirable branch of grade, and it will and much to the many industries and the progressiveness of “the Pittsburg of the West…the Chieftain hails them welcome.” 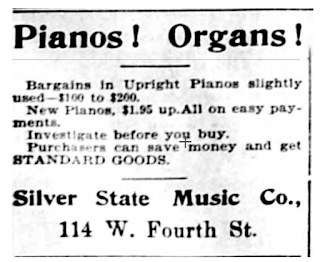 Silver State Would set itself apart from the other music operations, by publishing its own sheet music. In 1900 “Where the Golden Daisies Grow,” composed by Silver State owner Lowell Kieffer (with lyrics by Francis E. Nelson) was published. 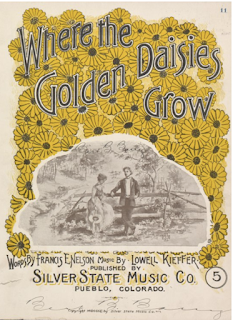 Silver State wouldn’t be the only early Pueblo sheet music publisher. Western Music Co., housed at 205 E. Fourth St., would press its own compositions, including the 1906 “When the Columbine’s In Blossom Bessie Dear,” by Frank W. Sterns and Edmund Leischke. 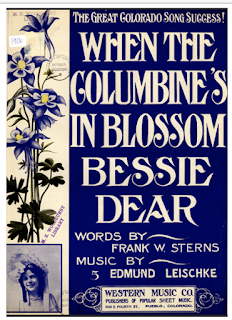 The new century would bring adversity to Silver State. In 1916 a fire at a nearby store spread to the shop, destroying it, along with Dondeo Woolen Mills, and Scribner and Co.

As World War I raged, Pueblo would soon be home to other local sheet music publishing houses, which quickly took advantage of the need for patriotic songs. These companies included E.D. Moyer (1917’s “Bonnie Land of Freedom”) the Cooperative Music Union (1917’s “Betty My Own”), and the prolific F.B. Martin (the 1918 compositions “America in War,” “Follow The Flag,” “Off to France,” “The Pacifist Song,” “Uncle Sam Will Fight,” and “At the Call of the Bugle”). 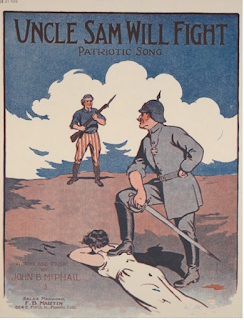 Lowell M. Kieffer would pass away in 1918. Silver State Music would continue, but its location would be destroyed, in the 1921 flood. According to a story in the Chieftain, “The management of the Silver State Music Co. estimates that it will require sixty days to clean up the debris, and then the business will he resumed.”

The business would later move to 206 N. Main.

Between 1918-1919, the city would see two more music stores open – Knight-Campbell, and D.Z. Phillips. The Denver-based Knight-Campbell, previously of Knight-McClure mentioned above, opened a store in Pueblo, at 420 Main Street. The grand opening included a performance by Denver singer, Rose Hilts. D.Z. Phillips’ store was located at 627 N. Main.

When it came to promotion, Phillips Music would one-up Silver State’s sheet music publishing, by creating its own band, the Phillips Crusaders. Members included musical youth, who would later wear military uniforms, and subtlety hyped the music store, while being staples of Pueblo parades during that era. 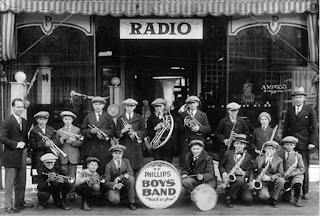 Phillips would later become vice president of the Bennett Music Company, in Santa Barbara, CA. He died in 1952, in California.