Zella Richardson stood outside the University of Southern Colorado’s Massari Gymnasium, surrounded by hundreds of people. The threat of being trampled couldn’t keep the 17-year old East High School junior from attending the biggest rock concert to ever come to Pueblo, Colorado in recent memory—Van Halen.

“I did extra babysitting jobs so I could get tickets," she said. "It was my first concert—ever. I was very excited”

The band's itinerary for the first few dates of the World Invasion Concert Tour, or what was dubbed by the band as the Party 'til You Die Tour, included mainly smaller cities, such as Great Falls, Eugene, and Spokane - a chance to work the bugs out before hitting the larger arenas. The Pueblo show, which doesn't even appear on the official concert tour list, would be the last small market stop in support of Women and Children First - the follow-up to their successful sophomore effort Van Halen II - released just four days before the Pueblo show. When tickets went on sale, they sold out in just a few hours.

"At the time, there was this record store in the Pueblo mall, and I remember having to go there on a Saturday morning, and there was this crazy line," said Dianne Maes. "I didn't know if we were going to get tickets." The 16-year old Central High School freshman (Dianne Alonzo) made plans to go with several friends. "My parents were strict but my dad went to a lot of concerts in his day, and so they always let us go."

"I was a huge Van Halen fan," said Shauna Clarke. The Rye High School graduate attended the show with her fiancé Sam Biondolillo, and friends Danny and Charlie Garrett, along with their girlfriends. "I was shocked that they would be coming to Pueblo."

Ticket holders started arriving at sunrise the day of the show for an opportunity to get close to the stage, once the doors opened. By noon several hundred people crammed in front of the entrance.

"I was there with my friends Bobbi Richards, Marty Vallejos and Marnie Berrian,” Richardson said. “We got there at 11:30 for a 7:00 p.m. concert. There were people smashed up against the doors - but it wasn't reserved seats, and we really wanted good seats."

Just four months earlier, on Dec. 3, 1979, 11 fans of The Who were trampled to death as they waited outside Cincinnati’s Riverfront Coliseum for first-come, first-sit general admission seats.

“When the doors opened, everybody started running,” Richardson said. “It was kind of scary because I weighed like 98 pounds soaking wet, and I was about five feet tall.” She found a seat in the bleacher section, on the left hand side, about 30 feet from the stage.

Shauna Clarke and her party found a spot in the back of the gym. "All I could see was the light show, but I could hear the music, and people screaming and going nuts."

Dianne Alonzo and her friends found seats five rows from the stage - dead center. "We had folding chairs but we stood the whole time," she said. "David Lee Roth threw one of his bandanas in the audience, and my friend Gary Lucero caught one and one of Gary’s friends caught one of Alex Van Halen's drum sticks." 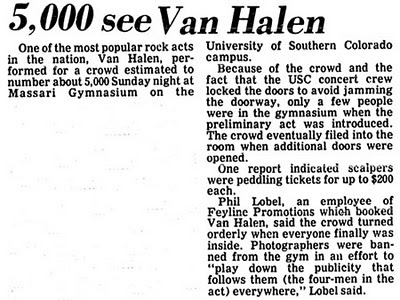 
Of course, as history would go on to record, the concert would not be remembered for the band's setlist.

At the start of the 1980 tour, Van Halen added specific demands in its performance contract, in an effort to make sure the promoters actually read the document. On previous tours concert organizers only skimmed the contract and in turn, provided inadequate accommodations for the group's massive staging needs - putting stage crews in danger.

In the case of the Pueblo show the band decided to add "no brown M&amp;Ms" to their contract, as a means of checking whether the venue was properly honoring the whole of the document. If they found the candies it would be assumed that there were legitimate technical and safety concerns. 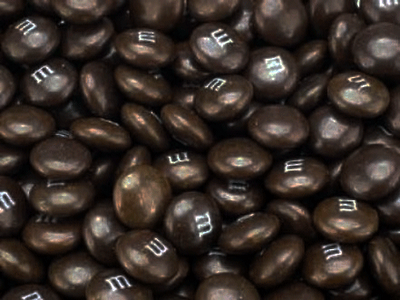 When the band got to the dressing room they found brown M&amp;Ms.

The night of the Pueblo show, the band's heavy stage sunk on top of the brand new Massari Gym floor, causing about $80,000 worth of damage. Upset by the apparent lack of regard for the rider, the band trashed its dressing room. 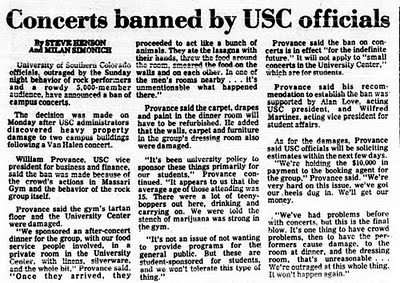 
(Author's note: After originally agreeing to be interviewed for this story, one of the members of the University of Southern Colorado student-run Concert Crew, the group responsible for helping to arrange the set-up of the Van Halen show, declined to talk about that night.)

In 2008 the Web site The Smoking Gun obtained the original Pueblo contract.

In 2007 Blender Magazine published its 100 Days That Changed Music issue. Coming in at number 65 was the March 30, 1980 Van Halen show in Pueblo, Colorado:

March 30, 1980 - Van Halen find brown M&amp;Ms backstage
After a show at the University of Southern Colorado, in direct contravention of the clause in the band’s contract, to be precise. They trash the dressing room, immortalizing the benchmark for all absurd backstage demands.

Zella Richardson is now the event coordinator for the Pueblo Better Business Bureau.

Dianne Maes works as a lab tech at a chemical manufacturing facility.