Solve the Mystery: Jack Shiplet and the Blue Ridge Boys

Sometimes I stumble upon a Southern Colorado record that is literally a mystery. When I've exhausted every possible means of locating any information, I'll post these finds here - in hopes that someone who reads this blog can help out. As is the case with this nice (but crunchy) country disc from Jack Shiplet and the Blue Ridge Boys (Jim Cox credited on vocal), out of Rye, Colorado.

On the Green Towers label, the single also notes a catalog number associated with KCMS radio (KCMS 1067/1068). As I have done another story about a record with the same notation (see Norbie Larsen piece), and confirmed that record was recorded at the Manitou Springs studios, let's assume that was the case here. No clue on when this was recorded. 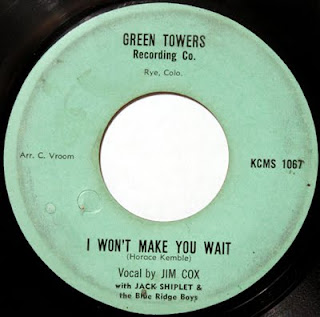 "I Won't Make You Wait" is credited to Horace Kemble. A quick search indicates that Horace and his wife owned and operated the Green Towers Lodge in Rye. My guess is that Jack and the boys were performers there.

The record is arranged by a "C. Vroom." In my last blog post, Blaine Reininger mentioned that he took guitar lessons from a "Mrs. Vroom, who had a studio on Orman Avenue, with her own record-cutting machine." Let's go with it as being the same person, unless I hear otherwise. 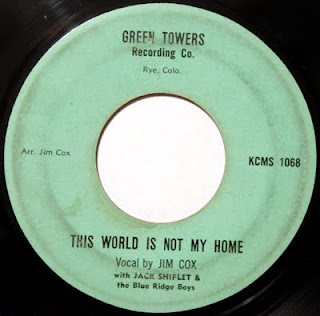 The flipside, "This World is Not My Home" is an Albert Brumley-penned song, later made popular by both Hank Thompson and Jim Reeves.

Listen to "This World is Not My Home"

Email ThisBlogThis!Share to TwitterShare to FacebookShare to Pinterest
Labels: Rye