Not a lot of information on this find. Thankfully, just when I was about to give up, I found Don's wife Pat, who was able to shed a bit of light on this single.

Recorded in 1963, in a basement studio in Pueblo, Don Sloan made a deal with La Junta music maker Gene Clark to help pay for the recording - he had to put one of Clark's own songs on the b-side. (NOTE: Gene Clark also appears as co-writer of the Mac McClanahan "No Sweeter Love" / "That Nonsense Stuff").

Side one features the Sloan-penned "Do You Really Love Me," a song dedicated to his wife, Pat. 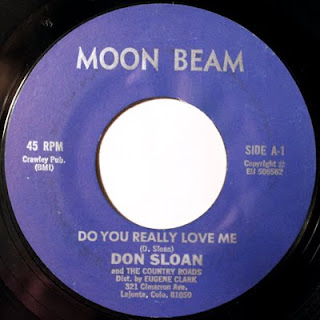 Listen to "Do You Really Love Me"

As promised, the flip side features the Gene Clark composition, "What Changed Your Mind." 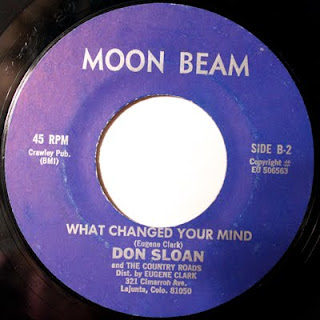 Listen to "What Changed Your Mind"

An estimated 300 were produced, and distributed while the band was on the road. A few were sent to local radio stations. It would be the first and only single the group recorded.

Country Roads stayed together about fifteen years, playing all over Colorado and New Mexico, but the group was always a side project for its members, who all had day jobs, including Sloan, who worked at a local water company.

Sloan would later perform with the local group, the Country Gentlemen, before retiring from music. He and his wife reside outside of Pueblo.

COMING NEXT POST: The Teardrops
Posted by Lisa Wheeler at 1:57 PM