Movin' On To A Better America

Finding a Colorado-based Independence Day record that compares to last year's Dick Bodine post was hard - so I'm not even going to try to top it.

But I think I came close... 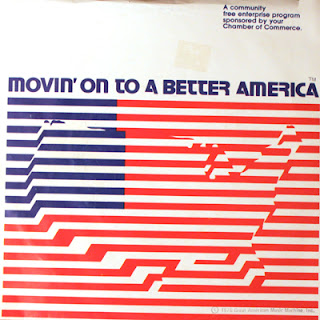 I actually found this single in a thrift store in Midland, TX. How I get so lucky finding Colorado records in some of the most unlikely locales, is beyond me.

This ode to America, specifically American chambers of commerce, was appropriately released in 1976, and penned by the prolific Ralph Harrison and Tim Schumacher, over at the Great American Music Machine, in Denver. The company had a knack for writing long-form PSA-style songs (one of these days I'll write an entire blog about them, but every time I think I have every possible GRAMM record out there, I find another - see the Denver Nuggets and the Skiing in the Rockies LP for two recent GRAMM posts).

"The mission of your Chamber of Commerce is to advance human progress through an economic, political, and cultural system based on individual freedom, incentive, opportunity, and responsibility..." - Liner notes on the picture sleeve.

Ralph handles the vocals on "Movin' On to a Better America," and the spoken-word flipside, "The Story of Free Enterprise."

He follows with the spoken word text:

"Yes the American way, it's a good way. A way of life enjoyed by over 200 million proud people who share its many values. A legend of freedom and prosperity, envied by billions the world over, who have only heard of its greatness. An example of humanity worth preserving for the free world to follow in the years that lie ahead. And when you talk about preservation of our preferred American lifestyle, the discussion leads directly to the work of the many dedicated chambers of commerce..."
Posted by Lisa Wheeler at 5:15 PM