After I wrapped up writing my story on Randy King, I discovered a second single on the Denver-based Enterprise label. This one from Jerry Savoy, and released right before the King 45.

Now pay attention, because it gets kinda random here…

Both sides of the single “All That Really Matters” and “With You” were produced by Gary Paxton.

Paxton is best known for his involvement in two novelty hits: “Alley Oop” (1960) by the Hollywood Argyles (Paxton sang lead), and “Monster Mash" (August, 1962) by Bobby Boris Pickett and the Crypt-Kickers. Both of these facts will be important later…

Somewhere along the way, in Paxton’s busy producing career, he ended up in Denver. In December 1961, he was at the helm of the Hollywood Argyles Finer Arts single, “The Morning After”/ “See You in the Morning.” Finer Arts was owned by former Puebloan Morey Bernstein of Bridey Murphy fame. The single didn’t do much. A January 6, 1962 Billboard mention said, “The Morning After” had “moderate sale potential.”

On to Jerry Savoy.

How Gary Paxton and Enterprise got together is a mystery to me, but here’s what I found. Sometime in early 1962, while Paxton was still producing in Denver, he hooked up with Enterprise, and country singer, Jerry Savoy. Jerry recorded “All That Really Matters,” written by Gary Paxton, and – wait for it – Johnny MacRae. Johnny MacRae was a vocalist in – wait for it – Bobby Boris and the Crypt-Kickers.  The b-side is another MacRae composition, “With You.” 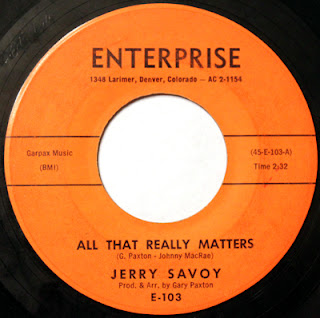 Note Garpax on the label. Garpax would go on to be the label Gary Paxton used to release “Monster Mash” in 1962. 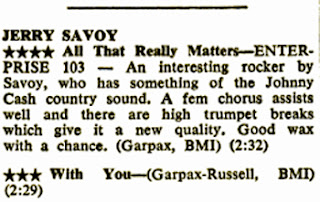 So “All That Really Matters” received favorable reviews. In fact Billboard gave it four stars and deemed that it had “strong sales potential,” on June 16, 1962. No clue what happened to this catchy number, but it didn’t go anywhere. Paxton went on to bigger and better things, and that was that.

Of course it didn't go passed me that the Enterprise and Garpax labels look very similar. 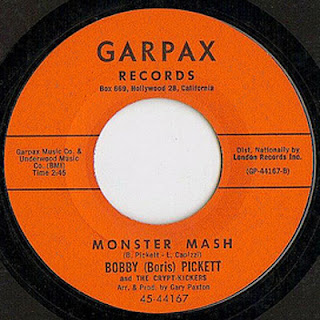 Several years later Savoy would go on to release two records on the Chart label: Chart 1105 – “Make it Hard for Me” / “Where Can a Poor Man Go” Chart 1108 – “Foot in Mouth Disease” / “Falling Apart at the Seams”