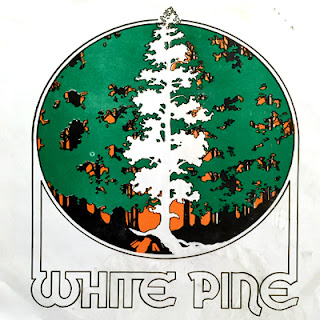 This is actually an updated version of a piece I ran, in 2015, on this country honky tonk duo out of Pueblo. At the time, I couldn't locate anyone from the band, to fill in the holes. Then I was contacted by White Pine guitarist, Jerry Christie, (thanks, Jerry!)

Let's start off with your own story in the Pueblo music scene.

The story begins in 1969, when I first met Doyle Trantham and Brian Richie. We formed the band Uncle Mud, which was exclusively rock. I had been playing drums for a few years prior to this in several bands in town, and attending the University of Southern Colorado, when they approached me to play drums with them. The following year, 1970, we decided to try our hand at the acoustic folk/bluegrass movement by forming the band Eureka which included Brian, his wife Cindy, Doyle, Steve Crocket, and myself (now on acoustic guitar). We played frequently, at clubs like the Irish Pub and college shows.

How long did Eureka last?

In 1972, Doyle and I left Brian and joined Donovan McNeily, his wife Patty, and Dex Murry in a band named Wheat, which also played the acoustic music circuit of clubs like the Irish Pub. This band was very popular at the time in the southern Colorado area. (NOTE: For two years, Wheat also included Tuxedomoon's Blaine Reininger)

In 1975, we linked back up with Brian who was organizing a series of artistic events in Pueblo that he named the Arkansas Valley Artists or AVA for short. This included musicians, artists, dancers, pets, etc. that presented a series of shows and events at the Sangre De Cristo Arts Center and the USC. After the AVA experience we again went our merry way, trying other combinations and styles of music. Doyle and I picked up an accordion player from the AVA named Max Fowler and formed a three piece country/bluegrass group called Redwing, while Donovan and Brian formed a band called The Mountain Dreamers. Both of these bands toured around the state and did fairly well. By late 1976, Doyle and I were back together in the band Arizona Nightingales, along with John Grove and Gary Fowler.

(NOTE from Blaine Reininger: "We played all over Colorado. We even went on tour through Montana and Idaho, playing Seattle and San Francisco, getting gigs anywhere they would have us, playing for gas money. The house where we crashed belonged to the light guy at the bar in San Francisco... turned out to be where I lived with Steven Brown, in the early days of Tuxedomoon.")

And it wasn't the last time you and Brian were in a band together...

No, in 1977 I reunited with him in the Wild Goose Grab Ass Band, and I was back on drums again. We also met Ray Hockaday at that time who played bass in the band. This band took off, and in 1978 and 1979 we opened for The Dillards (a Missouri-based bluegrass band) at the Greenhorn Mountain Music Festivals in Colorado City. After this, we all took some time away from each other, as we cooled our heels for a while and did separate pickup gigs.

And then White Pine happened...

Later July of 1979, the first version of White Pine was put together by Donovan McNeily (who already owned the name, logo, etc...) as a back up band for a new local female singer named Wanda Lane, so that she could attempt to break into the country music scene. We rehearsed all original songs that we had written for a few weeks prior to opening a show for Tommy Overstreet, at Memorial Hall in Pueblo. This was so successful that we opened other shows in September and October that year. Wanda Lane went on to try Nashville, but never took off in country music.

Where were you all playing, around town?

In late fall of 1979, Donovan happened to land the house band gig at the Caravan club on north Elizabeth. He had been playing there with Guys and Doll, who left the club. Donovan needed to put a group together quickly to play the following Wednesday night at the Caravan.  Who better to call than his former band mates from the local area, who already knew each other, that could put together a set list of songs that were still familiar to all of us. and could each bring our own following of fans? Thus was born White Pine. We were a six piece band with the nickname "the guitar army" since four of us played guitar (including myself). Doyle added the necessary variety with fiddle and mandolin. All of us could sing lead and harmony vocals, except Don Nelson the drummer, which created the most impressive vocal sound I have ever had he pleasure of being a part of. We played at the Caravan as the house band every Wednesday, Friday and Saturday, to standing room only audiences from that first Wednesday night in 1979 until 1983.  It got so crowed at the Caravan that most nights you could barely move from the bandstand to the bar. When we would leave the Caravan to do other shows (which became more and more frequent) we would make a minimum of $1000 a night. We actually wound up buying a second complete sound system and set of amplifiers so that we could leave one permanently installed at the club and take the spare to other gigs.

Did the band ever open for any national touring acts?

During our time together we enjoyed great success, including several more opening act appearances for folks like Hoyt Axton and Johnny Paycheck, headlining the Greenhorn Mountain Music Festival, numerous events at the Art Center, college and university shows, including USC and the School of Mines in Golden. Getting our songs on KKCY FM radio, with the related interviews we did, really propelled our rise.

So what happened? Why didn't White Pine receive national offers?

Unfortunately, it is a proven fact that "what goes up must eventually come down." So it was with White Pine. After dominating the music scene in Pueblo and the surrounding area for nearly four years and standing on the verge of a record deal, the pressures associated with our success and the constant struggle for dominance within the group caused us to implode one day, in 1983, as a bitter argument erupted between Donovan, the band's founder, and Brian, who came to see himself as "the prize bull" (his own words) and who secured the financing for our album.  Brian was let go from the band, and since he basically had claim to the master 24 track recordings from Applewood Studios, that was the end of our album hopes. 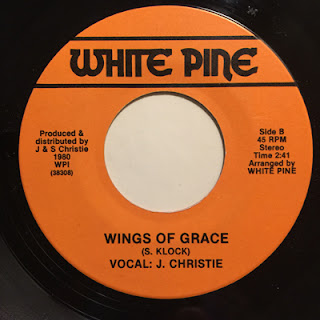