Always Look Inside an Album Cover... 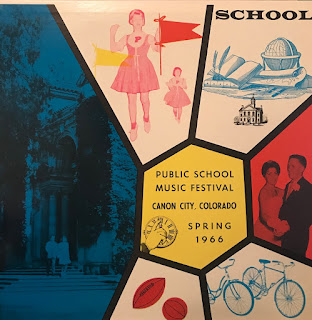 So I was databasing the LPs I found, at the spring Denver Record Expo, when I discovered a typewritten piece of paper inside the recently-acquired Public School Music Festival, Cañon City, Colorado, Spring 1966. 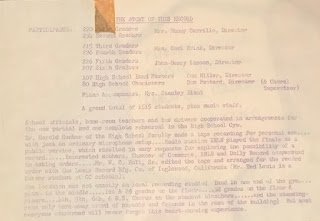 The paper inside noted that the albums were pressed at Lewis Record Manufacturing, of Inglewood, CA., by Mr. Ted Lewis. It noted that Ted was "a former student, at Cañon City schools." So I hit the Internet, to see what I could find, on this former Southern Colorado resident, who was now in the record business, in California.

The first thing that came up, was a 1980 Billboard story titled "Springsteen Awarded $2.1 Million In Federal LP Bootlegging Case" noting that the FBI questioned a Lewis Record Manufacturing employee, Kathleen May Jones, who admitted to pressing bootlegs, at the Inglewood location.

The next thing mentioning Ted Lewis and Lewis Manufacturing, was a link to the incredible blog The Amazing Kornyfone label, yes the same label (known also as just TAKRL) which was one of the first bootleg record labels in America. Based in Southern California, in the 1970s, the label churned out hundreds of illegal (mostly live) recordings from The Beatles, Bruce Springsteen, Elvis, The Grateful Dead, Pink Floyd, and that's barely touching the surface. The label was run by "Ken," (Ken Douglas) who previously ran the equally infamous Trade Mark of Quality (TMOQ) bootleg label, along with "Dub" Michael Taylor. Douglas started up TAKRL, in 1973.

As a record collector, I have seen (and have formerly acquired), a few of these deemed illegal, but rare and often $$$ bootleg LPs, over the years. They are prized among specific artist collectors, and have a devoted following.

In an archived interview with Douglas, he stated that he employed Ted Lewis and Lewis Manufacturing, to press bootlegs. 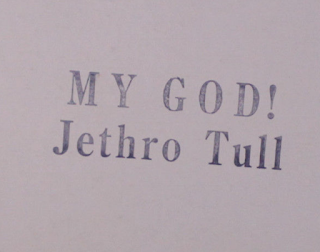 "... taken our business to a place called Lewis Record Manufacturing, where we dealt with a wonderful woman there named Kaye. She was old enough to be my grandmother and she kind of reminded me of a woman who would have been comfortable with the likes of Bonnie and Clyde in her youth. She wasn’t afraid of anything. It was to her that we handed My God (Jethro Tull boot) and Establishment (Bob Dylan boot - both TMOQ releases) and these were our first records on colored vinyl which the growing number of bootleg fans really seemed to like..."

The fact that there is now a documented Southern Colorado link with these labels is crazy to believe. If it had not been for that typewritten piece of paper, found in a Cañon City Public School Music Festival LP, that fact may have been lost forever.