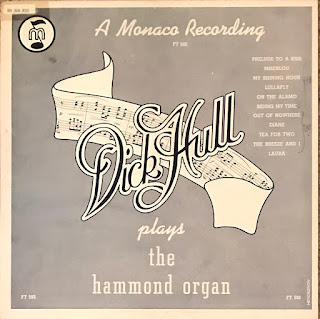 I'm a sucker for organ music. My great-grandmother, grandmother, and mother each had an organ in their homes. I remember hearing three generations of "Laura" throughout my childhood, and I guess the sound just stuck with me (for the record, the closest I ever came to personally playing the organ, was attempting to bang out "Rock Lobster," on mom's living room Hammond). 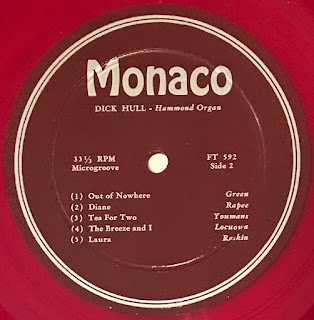 I found this album, at the recent spring Denver Record Show, thanks to my buddy Chris. Guess he knew I would probably be the only person in the room who would quickly hand over $3 for a Colorado organ LP (grin). Turns out, it was one of the highlights of the daylong dig.


Dick Hull originally played at WHEC Radio, in Rochester, New York. At WHEC, Hull was the regular organist, during the station's program broadcasts. He later purchased the Wurlitzer style 235 3/11, opus 411, and moved it to Denver, where he performed at the Paramount Theatre there, and at the Chief Theatre, Colorado Springs. The earliest notation I found, of his time in Colorado, was a 1952 story, on his performance at the Colorado State Fair, in Pueblo. 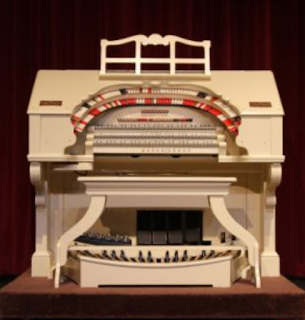 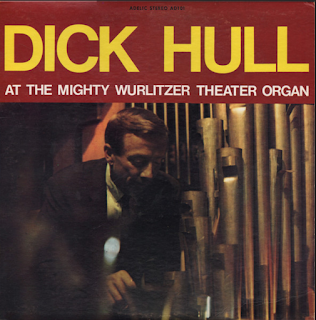 In 1965, Dick Hull moved to the Three Coins Restaurant in Louisville (525 Main Street). In 1967 he recorded another album, Dick Hull at the Mighty Wurlitzer Theatre Organ (Adelic 101 - 1967), at the restaurant.

A review of the LP states: "Dick Hull! The name conjures memories from the first days of American Threatre Organ Society, right to the present. He is such a legend that we weren't quite sure he was for real. 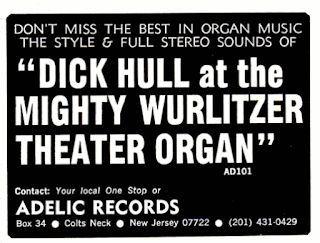 Hull developed a large following, and a loyal fan base, at the Three Coins. Then, in 1968, he was no longer employed at the locale. A 1968 story in Theatre Organ Bombarde notes:

It looked like a disaster in Denver - About the time Dick Hull's top notch recording on the Wurlitzer, in the Three Coins restaurant was released, Dick found himself out of job, parted from his seat because of differences with management over the kind of music best for the beanery. The organ was silent, and the future dark. Dick's chin was dragging. Then, the restaurant opened up for sale. A combination of patrons, who appreciated the music Dick played, banded together to purchase the place and put back in the seat. playing the kind of music people like to hear.

I found a 1974 letter, which Dick Hull wrote to George Wright (August 28, 1920-May 10, 1998), the world-renowned organist, from the famed Fox Theatre, in San Francisco, The letter noted that Hull was giving Wright several pieces of organ-related items.

The trail grows cold on what happened to Dick. If anyone has any additional information, please drop me a line.

As for his "mighty Wurlitzer?" A 2012 story on the organ, in the Colorado State University publication, Today states:

This ‘Mighty Wurlitzer’ was installed originally in 1927 in the Picadilly Theatre in Rochester, N.Y., where it replaced a live orchestra to accompany silent films. Later the organ was installed in a private home in New York state and then, in 1965, in the Three Coins in the Fountain Restaurant in Louisville, Colo. There, on the organ, in 1967 legendary organist Dick Hull recorded an LP (long-playing record). In 1975, the organ was moved again, to a pizzeria in Provo, Utah. When the pizzeria closed, Ms. Cook rescued the organ, had it rebuilt and enlarged from a 16-rank to a 19-rank organ, and in 1982 donated the organ to CSU. The organ was installed in the Lory Theatre in 1983. In 1997, the organ was rebuilt by Ed and Patty Zollman, famed organ installers and restorers, of Wichita, Kansas. The late CSU Professor Bob Cavarra taught organ on this instrument, and one of his students, Mr. Kevin Utter, played the very last concert on the organ in Lory Theatre on March 11, 2011. While the fate of the mighty Wurlitzer organ is still being decided, construction on the Lory Theater continues with an anticipated opening date in fall 2012.
Posted by Lisa Wheeler at 3:23 PM