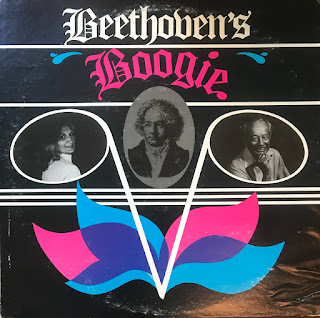 Record digging near Fort Collins, several years ago, I spotted this Loveland-based LP, Beethoven's Boogie. Conceived by Bill Gleichmann and Pat Jones, the mostly-instrumental 1983 recording couples classical music with boogie - a genre I can't say I had ever heard, prior to this find.

I was about to be schooled on this ABBA-styled mashup. 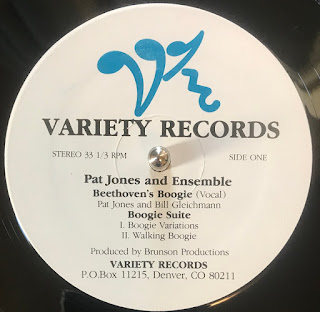 Listen to a sample of "Beethoven's Boogie"

The album... is the culmination of research on the origin and development of boogie, or boogie-woogie, as it was first called. The title song adheres to an early boogie formula derived from an adopted classical melody, combined with a typical boogie rhythmic pattern. - Liner notes

Liner notes also indicate that Pat Jones, who provides vocals on the above clip, is a Colorado native who began studying piano at the age of six. There is little other information regarding her contribution to the recording.

Bill Gleichmann is noted as a University of California graduate, who worked in Hollywood for "radio/TV, and motion pictures." An Internet search finds that he lived in Loveland, and passed away in 1994.

The LP was produced by Bruce Brunson, who at one time was affiliated with the Charley Butler and Linda Rinaldo group, Colorado Sunshine Company.

The back of the LP shows a P.O. Box, located in Denver, which was pasted over with a sticker noting a Loveland address.

Email ThisBlogThis!Share to TwitterShare to FacebookShare to Pinterest
Labels: Loveland