I'm Trying to Find Where the Angels Live 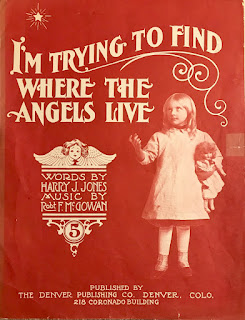 Attended the Rocky Mountain Book and Paper Fair, last week, where I scored a substantial cache of Colorado-published sheet music. Some fantastic additions to the esoteric state-related music collection, but one particular piece made me mutter a silent "%&@#," when I saw it (it was a public place, after all - grin).

I'm Trying to Find Where the Angels Live features a little girl, holding a doll, and I'm thinking, "Wait, why would she want to go to heaven. Who died? The little girl? Her doggie?"

Think again. The song is about her mother.


Fro, the yard 'cross the way, strayed a baby one day
To look for her mama, so dear.
Her doll in her arms, seemed to add to her charms
And check could be noticed a tear.
A police man passed by, saw this little one cry,
And asked her, with hand on her head.
Why from home she had strayed, then he kissed the wee maid
As wistfully to him she said...
I'm trying to find where the angels live
My mama is there you see
They called her away, on bright summer's day
And left daddy dear and me.

I'll give you a second to get a hankie...

Written by Harry J. Jones and Robert F. McGowan, the 1910 tearjerker was put out by the Denver Publishing Company, located at 218 Coronado Building, which was original located at the corner of 15th and Stout (it was demolished in 1953, and is now home to a parking garage).

I also located another copy of the sheet music, with an illustrated cover: 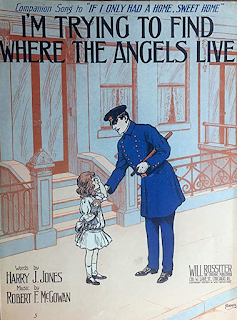 The story gets even better, when I tracked down the composers.

Robert F. McGowan was born in Denver, in 1882. He is listed, in the 1904 Denver City Directory as a musician, with a residence at 2428 Larimer. I found another reference that he served as a Denver firefighter.  In 1905, he and Jones penned "I'll Come Back Some Day," published by the prolific Tolbert R. Ingram company.

He left the city in 1910 (I found another story, which noted 1913), to move to Los Angeles. While there, he met up with a young producer named Hal Roach, who gave him a job as the director of a new series of silent films he conceived... Our Gang. 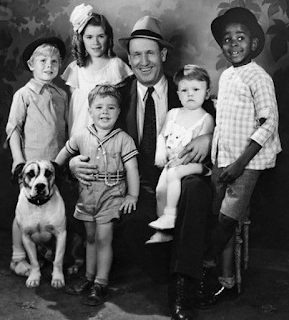 Robert McGowan, with the cast of Our Gang

Shortly after McGowan began directing the Our Gang series, he became ill, and turned the director's chair over to nephew, Robert A McGowan.  The senior McGowan recovered, and took the series back over, during what was considered the height of the silent film and the early talkie eras of the series, with the popular characters, Farina, Stymie, and a young Jackie Cooper (the character of Buckwheat didn't appear until 1934. The character of Alfalfa joined the cast in 1935). McGowan left the series in 1933 (when the character of Spanky was introduced), to direct several Paramount motion pictures.  He returned to Our Gang, one more time, to direct Divot Diggers (1936). 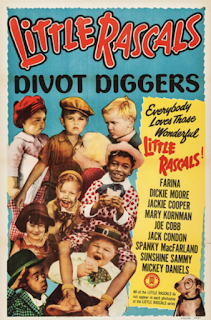 McGowan died in 1955. He is buried in the Holy Cross Cemetery, Culver City, CA.

According to the 1904 Denver City Directory, Harry J. Jones was a clerk at the Colorado National Bank, who resided at 3826 Gilpin. I could find no other information on this lyricist.