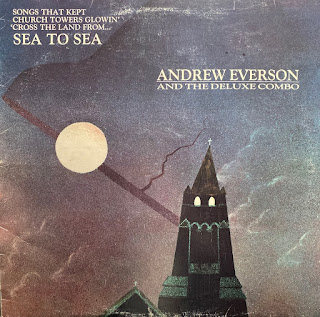 February 9 has been deemed National Pizza Day. Wouldn't you know, there is a Colorado song, dedicated to this glorious dish, courtesy of Colorado Springs' own Andrew Everson and the Deluxe Combo?


Listen to "The Pizza Song"

Released in 1984, "The Pizza Song," was a track on Everson's Sea to Sea LP. Andrew was joined by Russel Spaeth on guitar, Kent Dix on drums, and bassist Doug Statler. 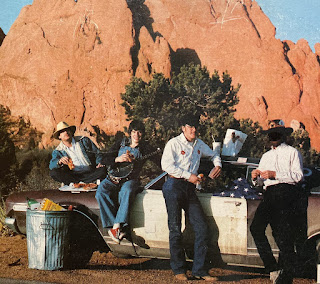 No idea why the band member on the far right has his face blacked out - as that's how I found it.

The album was recorded at Passage Studios, in the Springs, with the help of local production guru, Rich Mouser. Tiny Barge shows up on trumpet, along with Anne Lenoire on clarinet. Mike Brumbagh rounded out the horn and wind section, on trombone. The "Tower of Flour" (Ann Chovies, Mel & Ted Chaez, and Chris P. Crust) add vocals to "The Pizza Song."

I had a chance to track down Andrew, last year, and he graciously told me the story behind the song.

"That song still draws a lot of attention! Pizza is a product that deserves its own song. America loves this stuff! The song also was the beginning of my 'rock' style of banjo playing. That recording still gets many hits on line and also grabbed the interest of Dr. Demento some years ago.

It was my intention to create a music video with the band at Fargo's Pizza, in the Springs. It was a fun idea that never got beyond the drawing board. And yes, Fargo's is still my favorite pizza even after living here in California for the past 30 years.

A lot has happened since this album in which I was exploring new places for the 5-string banjo. I proceeded to release a cassette tape album entitled Banjo in a Briefcase, in Colorado Springs which went much deeper into this experimental music. I took the project to Southern California, where I wrote and recorded more of this music as it morphed into a progressive rock project with banjo as the lead instrument.

I formed a band in Orange County and recorded a CD called If I'm Alive. We were just beginning to showcase this music at local clubs when an overuse injury to my right hand torpedoed the whole project. I can still play at modest speeds but the condition stole my hard-earned professional level of playing from me. At the same time I was directing a small choir at a church here in Orange County and after the sudden demise of the banjo project my work for the church increased. Since then my choirs have recorded 5 CDs and many of my songs have been published for choirs across the English speaking world by OCP publications and World Library Publications."