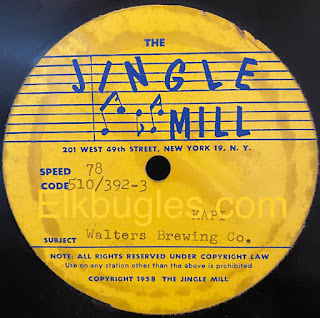 So I just got back from my hometown of Pueblo. Great visit with family and friends, including Joel Scherzer, the former owner of (the unfortunately long-gone) Record Reunion, the Pueblo record store, located near the library. Joel is the man who started my hunt for esoteric Colorado music, back in 1979, when I was a regular in his store, as an East High School record nerd.

So he's showing me his latest cache of obscure Colorado vinyl recording finds (knowing I'm already salivating at the prospect of including them in my collection), when he pulls out a one-sided, 8" acetate, on a New York City-based radio jingle company label.

You know when you try to appear all cool, calm, and collected, and inside you are freaking out? Yup, that was me, at that moment.

In the year 1979, I was not only a record collector, but it was also the year I started my eventual-long radio career, at a "beautiful music station" in Pueblo (KYNR), changing out reel-to-reel tapes, and reading news headlines at the top of the hour. So being offered a one-of-a-kind Colorado record, with a local radio station connection (and a radio jingle of a Pueblo beer company, at that), was like finding the holy grail. 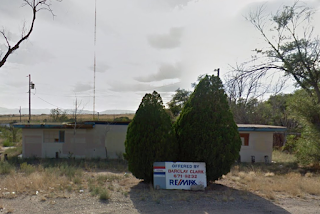 There is no date on the label, minus at catalog code, and "Copyright 1958." I can only assume that this jingle was provided to KAPI, shortly after it went on the air, making it one of the first advertisements for the new station.

Walter Brewing was local Pueblo beer staple, since first opening in 1898. It closed its doors in 1975. The company was brought back to life in 2014, and remains a beloved adult beverage brand, in the Steel City.

Side note:  The back cover liner notes, for the 1967 Sunny and the Sunliners LP No Te Chifles are courtesy of George Sandoval, the-then general manager at KAPI. The San Antonio group (formerly Sunny and the Sunglows) is considered one of the founders of Tejano music. Led by Sunny Ozuna, they were the first Tejano band to appear on American Bandstand and have a Top 20 hit ("Talk to Me" peaked at #11 on the 1963 Billboard charts). 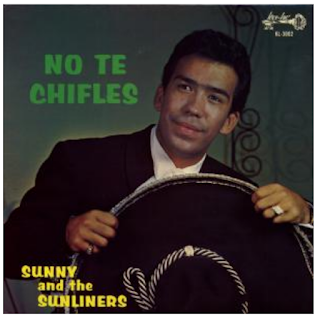 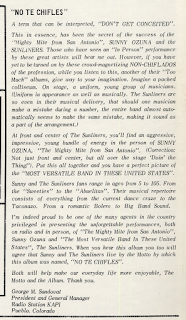